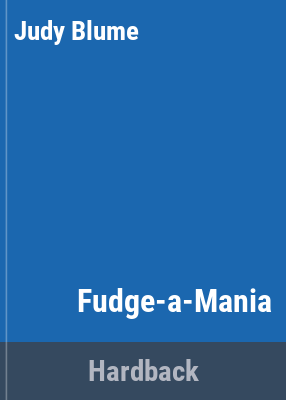 DDC classification: [Fic.] Summary: Pete describes the family vacation in Maine with the Tubmans, highlighted by the antics of his younger brother Fudge.
Tags from this library: No tags from this library for this title. Log in to add tags.
Fiction notes: Click to open in new window
Total holds: 0

Pete describes the family vacation in Maine with the Tubmans, highlighted by the antics of his younger brother Fudge.

Pete describes the family vacation in Maine with the Tubmans, highlighted by the antics of his younger brother Fudge.

There's no doubt about it--Fudge Hatcher is a sweet little guy, and fans of Blume's Tales of a Fourth Grade Nothing and Superfudge will cheer his return. Here the five-year-old extrovert continues to annoy his older brother, narrator Peter, whose gruff demeanor hides a very big heart. Blume's latest fast-pitched, funny novel further develops the relationship between these two endearing brothers as the Hatchers and their New York City neighbors, the Tubmans, share a house in Maine for a three-week vacation. Sheila Tubman, Peter's nemesis in Otherwise Known as Sheila the Great , returns in fine form, appearing for breakfast each morning in her fuzzy pink robe and bunny slippers--just one of Sheila's many habits driving Peter crazy and inspiring numerous diverting scenes. In fact, the colorful antics of all members of the two families--as well as a handful of the locals they meet--make reading these pages a treat. Ages 8-12. (Sept.) (c) Copyright PWxyz, LLC. All rights reserved

Gr 2-5-- The Tubmans and the Hatchers return in this latest chronicle of the hilarious escapades of Fudge, Pete, and Tootsie Hatcher and Sheila ``Queen of Cooties'' Tubman. Their parents decide to spend their summer vacation in the woods of Maine right next door to each other--but ``next door'' turns out to be in the same house. Fast-paced mayhem becomes the order of the day as children, adults (including Grandma Hatcher and Grandpa Tubman), and assorted pets find themselves in daily (hourly?) predicaments. Not to be outdone in the madcap pace, Grandma and Grandpa announce their intention to be married. The story concludes with the solemn pact between Pete and Sheila that even though they'll be related, they will always hate each other. The story is filled with humor, and the upbeat mood is sustained at a hectic pace from first page to last. The uncomplicated plot is developed smoothly with just the right doses of surprise and laughter to keep readers turning the pages. Characters are credible, and never lose their identities. Be forewarned--fun between the covers of the bright red dust jacket means multiple copies for purchase. --Mary Lou Budd, Milford South Elementary School, OH (c) Copyright 2010. Library Journals LLC, a wholly owned subsidiary of Media Source, Inc. No redistribution permitted.

Gr. 4-6. When Judy Blume first started writing, she had a unique voice. Her voice hasn't changed, but there have been so many Blume imitators--good and bad--that it is a little difficult to hear her above the others. Fudge-a-Mania is a perfectly respectable first-person novel, featuring those popular brothers Peter and Fudge, with a guest appearance by Sheila Tubman, otherwise known as Sheila the Great. Here, Peter and Sheila are forced to spend the summer together when their families share a vacation house, and readers will laugh at all the problems that pop up with the two enemies in such close quarters. As always with Blume, the dialogue is bright and snappy, the plotting episodic. It's not Blume's fault that she sounds like everyone else now, but it would be nice if she'd speak up a little so we could all remember what made her special. ~--Ilene Cooper

Peter's trials at the hands of his five-year-old brother, Fudge, pale by comparison to the news that their family is going to share a Maine vacation home with the family of his archenemy, otherwise known as Sheila Tubman. Fans of the previous books will enjoy this new set of chaotic adventures. From HORN BOOK 1990, (c) Copyright 2010. The Horn Book, Inc., a wholly owned subsidiary of Media Source, Inc. No redistribution permitted.

A well-loved author brings together, on a Maine vacation, characters from two of her books. Peter's parents have assured him that though Sheila (""The Great"") Tubman and her family will be nearby, they'll have their own house; but instead, they find a shared arrangement in which the two families become thoroughly intertwined--which suits everyone but the curmudgeonly Peter. Irrepressible little brother Fudge, now five, is planning to marry Sheila, who agrees to babysit with Peter's toddler sister; there's a romance between the grandparents in the two families; and the wholesome good fun, including a neighborhood baseball game featuring an aging celebrity player, seems more important than Sheila and Peter's halfhearted vendetta. The story's a bit tame (no controversies here), but often amusingly true to life and with enough comic episodes to satisfy fans. Copyright ©Kirkus Reviews, used with permission.
More book reviews at iDreamBooks.com