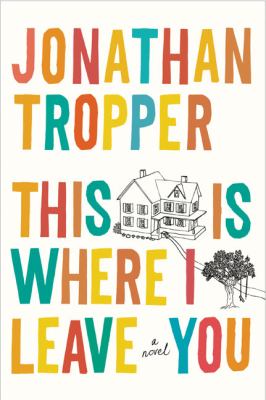 This is where I leave you / Jonathan Tropper.

<br> The death of Judd Foxman's father marks the first time that the entire Foxman family--including Judd's mother, brothers, and sister--have been together in years. Conspicuously absent: Judd's wife, Jen, whose fourteen-month affair with Judd's radio-shock-jock boss has recently become painfully public.<br> <br> Simultaneously mourning the death of his father and the demise of his marriage, Judd joins the rest of the Foxmans as they reluctantly submit to their patriarch's dying request: to spend the seven days following the funeral together. In the same house. Like a family.<br> <br> As the week quickly spins out of control, longstanding grudges resurface, secrets are revealed, and old passions reawakened. For Judd, it's a weeklong attempt to make sense of the mess his life has become while trying in vain not to get sucked into the regressive battles of his madly dysfunctional family. All of which would be hard enough without the bomb Jen dropped the day Judd's father died: She's pregnant.<br> <br> This Is Where I Leave You is Jonathan Tropper's most accomplished work to date, a riotously funny, emotionally raw novel about love, marriage, divorce, family, and the ties that bind--whether we like it or not.<br> <br> Watch a Video

According to Genesis, the earth was created in six days. In the newest work from Tropper (How To Talk to a Widower), the Foxman family spend a week together and the world practically implodes. Recently separated Judd, his two brothers, his sister, and their mother sit shiva for Foxman patriarch Mort. This seven-day Jewish ritual allows family members to mourn together while friends and relatives come to pay their respects-and have a little nosh. But the Foxman siblings don't get along, despite the best efforts of their celebrity child-care expert mother. As narrator Judd says, "Some families.become toxic to each other after prolonged exposure." VERDICT With its frat-house language and sexual obsessions, this hilarious, testosterone-driven thrill-ride comes with all the weaponry at the Foxmans' disposal: physical blows, verbal darts, psychological barbs, friendly jousts, and loving punches to the solar plexus. And the women have their say as well; there are no neutral corners in this melee. Highly recommended for Tropper fans, who will rejoice at the opportunity to indulge; others will wonder where he's been all their lives.-Bette-Lee Fox, Library Journal (c) Copyright 2010. Library Journals LLC, a wholly owned subsidiary of Media Source, Inc. No redistribution permitted.

Tropper returns with a snappy and heartfelt family drama/belated coming-of-age story. Judd Foxman's wife, Jen, has left him for his boss, a Howard Stern-like radio personality, but it is the death of his father and the week of sitting shivah with his enjoyably dysfunctional family that motivates him. Jen's announcement of her pregnancy-doubly tragic because of a previous miscarriage-is followed by the dramas of Judd's siblings: his sister, Wendy, is stuck in an emotionless marriage; brother Paul-always Judd's defender-and his wife struggle with infertility; and the charming youngest, Phillip, attempts a grown-up relationship that only highlights his rakishness. Presided over by their mother, a celebrated parenting expert despite her children's difficulties, the mourning period brings each of the family members to unexpected epiphanies about their own lives and each other. The family's interactions are sharp, raw and often laugh-out-loud funny, and Judd's narration is unflinching, occasionally lewd and very keen. Tropper strikes an excellent balance between the family history and its present-day fallout, proving his ability to create touchingly human characters and a deliciously page-turning story. (Aug.) (c) Copyright PWxyz, LLC. All rights reserved

Judd Foxman is in his late thirties when he finds himself living in a damp, moldy basement apartment, without a job and separated from his wife, who is having an affair with his now ex-boss. To make matters worse, Judd finds out his wife is pregnant with his child and that his father has just died, leaving a dying wish to have all four of his children sit shivah for seven days. What transpires over the course of that week is a Foxman family reunion like no other; filled with fistfights, arguments, sex, and a parade of characters offering their sympathies and copious amounts of food. This is a story that could be told by your best guy friend: laugh-out-loud funny, intimate, honest, raunchy, and thoroughly enjoyable. Tropper is spot-on with his observations of family relationships as each member deals with new grief, old resentments, and life's funny twists of fate. Tropper's characters are real, flawed, and very likable, making for a great summer read.--Kubisz, Carolyn Copyright 2009 Booklist

Reeling from the sudden collapse of his marriage, Judd Foxman spends an illuminating week with his dysfunctional family. It's bad enough that he walks in on his wife Jen making love to another man in their bed, but the betrayal is doubly devastating when Judd realizes her partner is his boss Wade, a macho talk-radio blowhard. With the image of the two of them likely to be seared permanently onto his retinas, Judd crawls off to a sad basement rental, only to be roused a short time later by the news that his cancer-stricken father has finally died. Judd's pop-psychologist mother Hillary calls her four grown children home to sit shiva for a full seven days, but it's doubtful that her atheist husband would have truly appreciated this nod to Jewish tradition. Unhappy as he is, Judd can take some comfort in the fact that the rest of the Foxmans are just as screwed up. His older brother Paul, once a gifted athlete, still blames Judd for the dog attack that brought his baseball career to a halt. Paul's wife Alice is so eager to get pregnant that she makes Judd an indecent proposal any sensible brother-in-law would refuse. Sister Wendy, married to a self-absorbed jerk, still carries a torch for her childhood sweetheart Horry, who suffered permanent brain injury in a college bar fight. And prodigal youngest Phillip shows up in a Ferrari with his much older life coach/girlfriend Tracy in tow. Thrown into the mix is potential new love interest Penny, who tantalized Judd in high school, and the news that Jen is pregnant with his (not Wade's) baby. All this sets up Judd for a major day of reckoning, and the realization that maybe, just maybe, he has contributed to some of the problems in his life. Tropper (How to Talk to a Widower, 2007, etc.) has covered this man-child territory before, but few can rival his poignant depictions of damaged men befuddled by the women they love. Copyright Kirkus Reviews, used with permission.
More book reviews at iDreamBooks.com