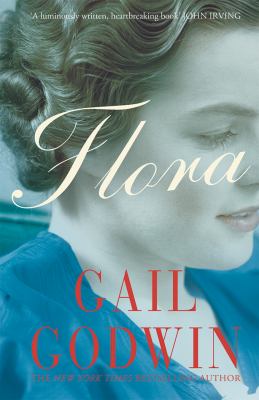 Genre/Form: Large type books.Online resources: Click here to access online Summary: Ten-year-old Helen and her summer guardian, Flora, are isolated together in Helen's decaying family house while her father is doing secret war work in Oak Ridge during the final months of the Second World War. At three, Helen lost her mother - and now the beloved grandmother who raised her has just died. A fiercely imaginative child, Helen is desperate to keep her house intact with all its ghosts and stories. Flora, her late mother's twenty-two-year-old first cousin who cries at the drop of a hat, is ardently determined to do her best for Helen. Their relationship and its fallout, played against a backdrop of a lost America, will haunt Helen for the rest of her life.
Tags from this library: No tags from this library for this title. Log in to add tags.

Ten-year-old Helen and her summer guardian, Flora, are isolated together in Helen's decaying family house while her father is doing secret war work in Oak Ridge during the final months of the Second World War. At three, Helen lost her mother - and now the beloved grandmother who raised her has just died. A fiercely imaginative child, Helen is desperate to keep her house intact with all its ghosts and stories. Flora, her late mother's twenty-two-year-old first cousin who cries at the drop of a hat, is ardently determined to do her best for Helen. Their relationship and its fallout, played against a backdrop of a lost America, will haunt Helen for the rest of her life.

Ten-year-old Helen is a precocious, imaginative child who must spend the summer with her guardian, Flora, while her father is in Oak Ridge, TN, during the last months of World War II. Helen is a "haunted little girl" who lost her mother at age three and whose grandmother, who raised her, has just died. She and her late mother's cousin, 22-year-old Flora, are isolated in Helen's family house on a mountaintop, quarantined from the polio that threatens their community. Helen is resentful of her caretaker, Flora, who cries easily and appears to Helen to be unsophisticated. But Flora is singled-minded in her attempts to do right by Helen. The aftermath of that formative summer will steer the course of Helen's life and haunt her forever. VERDICT A superbly crafted, stunning novel by three-time National Book Award award finalist Godwin (A Mother and Two Daughters), this is an unforgettable, heartbreaking tale of disappointment, love, and tragedy. Highly recommended.-Lisa Block, Atlanta (c) Copyright 2013. Library Journals LLC, a wholly owned subsidiary of Media Source, Inc. No redistribution permitted.

Narrator Helen Anstruther, "going on eleven," is the relentlessly charismatic and wry star of this stirring and wondrous novel from Godwin (Unfinished Desires). In the summer of 1945, in the mountains of North Carolina, Helen is trying to make sense of the world since her beloved grandmother's death. When her father leaves to do "secret work for World War II" in neighboring Tennessee, this becomes much more challenging, and Helen, motherless for years, is left in the care of 22-year-old Flora, a delicate and, Helen might say, hopelessly effusive relative. Helen has grown up in a rambling old house that once served as a home for convalescent tubercular or inebriate "Recoverers" under the care of Helen's physician grandfather. For a precocious girl who has lost everyone who's ever loved and known her, the house becomes a mesmerizing and steadfast companion. Though Flora initially appears to Helen as little more than a country bumpkin, their time together profoundly transforms them both. Godwin's thoughtful portrayal of their boredom, desires, and the eventual heartbreak of their summer underscores the impossible position of children, who are powerless against the world and yet inherit responsibility for its agonies. Agent: Moses Cardona, John Hawkins & Associates. (May) (c) Copyright PWxyz, LLC. All rights reserved.

*Starred Review* Godwin, celebrated for her literary finesse, presents a classic southern tale galvanic with decorous yet stabbing sarcasm and jolting tragedy. Helen, a writer, looks back to the fateful summer of 1945, when she was a precocious, motherless 10-year-old trying to make sense of a complicated and unjust world. Young Helen lives on a hill in North Carolina in an old, rambling, haunted house that was once a sanatorium for folks she calls the Recoverers. Raised by her immaculately turned-out, tart-tongued, and stoic grandmother, whom she worships, Helen is bereft after Nonie's sudden death. Worse yet, her father is summoned to work on the secret military project at Oak Ridge. He recruits a 22-year-old Alabaman cousin to stay in his place. Sweet, emotional, and seemingly guileless Flora is no match for feverishly imaginative, scheming, and condescending Helen. When a polio outbreak keeps them at home, and a war veteran begins delivering their groceries, tension builds. Godwin's under-your-skin characters are perfectly realized, and the held-breath plot is consummately choreographed. But the wonder of this incisive novel of the endless repercussions of loss and remorse at the dawn of the atomic age is how subtly Godwin laces it with exquisite insights into secret family traumas, unspoken sexuality, class and racial divides, and the fallout of war while unveiling the incubating mind of a future writer. HIGH-DEMAND BACKSTORY: Best-selling Godwin is always in demand, and with early accolades for this tour de force from the likes of John Irving, requests will multiply.--Seaman, Donna Copyright 2010 Booklist

Godwin (Unfinished Desires, 2009, etc.) examines the intricate bonds of family and the enduring scars inflicted by loss. In the summer of 1945, 10-year-old Helen Anstruther has just lost Nonie, the grandmother who raised her after her mother, Lisbeth, died when she was 3. Helen's father, the discontented, hard-drinking principal of the local high school in Mountain City, N.C., needs someone to stay with her while he does "more secret work for World War II" in Oak Ridge, Tenn. So he asks her mother's 22-year-old cousin, Flora, and, when one of Helen's best friends comes down with polio, insists that the pair remain at home to avoid the risk of infection. It's a bad idea: Weepy, unbuttoned Flora seems like a dumb hick to snobbish little Helen, who at first makes a thoroughly unappealing narrator. But as Godwin skillfully peels back layers of family history to suggest the secrets kept by both Nonie and Lisbeth (some are revealed; some are not), we see that Helen is mean because she's terrified. She's already lost her mother and grandmother, she's afraid her polio-stricken friend will die, and another close friend is about to move away--after delivering some home truths about how "you think you're better than other people." Helen got this trait from Nonie and both her parents, we realize, as Flora's comments gradually reveal how cruel Lisbeth was in her eagerness to leave behind her impoverished background. As usual with Godwin, the protagonists are surrounded by secondary characters just as fully and sensitively drawn, particularly Finn, the returned soldier whose attentions to Flora spark Helen's jealousy and prompt the novel's climax. Not all mistakes are reparable, we are reminded, but we learn what lessons we can and life goes on. Unsparing yet compassionate; a fine addition to Godwin's long list of first-rate fiction bringing 19th-century richness of detail and characterization to the ambiguities of modern life.]] Copyright Kirkus Reviews, used with permission.
More book reviews at iDreamBooks.com