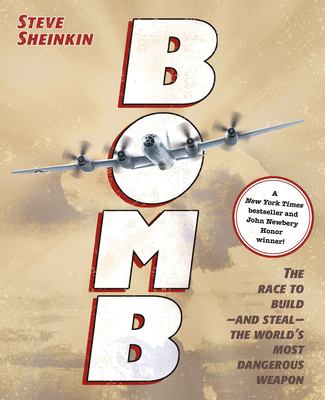 Bomb : the race to build and steal the world's most dangerous weapon / Steve Sheinkin.

<p> Perfect for middle grade readers and history enthusiasts, New York Times bestselling author Steve Sheinkin presents the fascinating and frightening true story of the creation behind the most destructive force that birthed the arms race and the Cold War in Bomb: The Race to Build -- and Steal--the World's Most Dangerous Weapon . <br> <br> A Newbery Honor book <br> A National Book Awards finalist for Young People's Literature <br> A Washington Post Best Kids Books of the Year title <br> <br> In December of 1938, a chemist in a German laboratory made a shocking discovery: When placed next to radioactive material, a Uranium atom split in two. That simple discovery launched a scientific race that spanned three continents.<br> <br> In Great Britain and the United States, Soviet spies worked their way into the scientific community; in Norway, a commando force slipped behind enemy lines to attack German heavy-water manufacturing; and deep in the desert, one brilliant group of scientists was hidden away at a remote site at Los Alamos. This is the story of the plotting, the risk-taking, the deceit, and genius that created the world's most formidable weapon. This is the story of the atomic bomb.<br> <br> "This superb and exciting work of nonfiction would be a fine tonic for any jaded adolescent who thinks history is 'boring.' It's also an excellent primer for adult readers who may have forgotten, or never learned, the remarkable story of how nuclear weaponry was first imagined, invented and deployed--and of how an international arms race began well before there was such a thing as an atomic bomb." -- The Wall Street Journal <br> <br> "This is edge-of-the seat material that will resonate with YAs who clamor for true spy stories, and it will undoubtedly engross a cross-market audience of adults who dozed through the World War II unit in high school." -- The Bulletin (starred review)<br> <br> Also by Steve Sheinkin: <br> <br> The Notorious Benedict Arnold: A True Story of Adventure, Heroism & Treachery <br> The Port Chicago 50: Disaster, Mutiny, and the Fight for Civil Rights <br> Undefeated: Jim Thorpe and the Carlisle Indian School Football Team <br> Most Dangerous: Daniel Ellsberg and the Secret History of the Vietnam War <br> Which Way to the Wild West?: Everything Your Schoolbooks Didn't Tell You About Westward Expansion <br> King George: What Was His Problem?: Everything Your Schoolbooks Didn't Tell You About the American Revolution <br> Two Miserable Presidents: Everything Your Schoolbooks Didn't Tell You About the Civil War<br> Born to Fly: The First Women's Air Race Across America </p>

Recounts the scientific discoveries that enabled atom splitting, the military intelligence operations that occurred in rival countries, and the work of brilliant scientists hidden at Los Alamos.

Recounts the scientific discoveries that enabled atom splitting, the military intelligence operations that occurred in rival countries, and the work of brilliant scientists hidden at Los Alamos. Suggested level: secondary.

In his highly readable storytelling style, Sheinkin (The Notorious Benedict Arnold) weaves together tales of scientific and technological discovery, back-alley espionage, and wartime sabotage in a riveting account of the race to build the first atomic weapon. The famous (Robert Oppenheimer) and infamous (spy Harry Gold) headline an enormous cast of characters, which also includes Norwegian resistance fighter Knut Haukelid, whose secret wartime missions prevented Hitler from acquiring an atom bomb. B&w portraits of key players appear in photo- montages that begin each of the book's four sections. Sheinkin pulls from numerous sources to supply every chapter with quotations that swiftly move the narrative forward. Suspenseful play-by-play moments will captivate, from the nuclear chain reaction test at the University of Chicago to the preparations for and dropping of the first bomb over Hiroshima. In a "genie out of the bottle" epilogue, details of the Cold War's escalating arms race and present-day weapons counts will give readers pause, especially Sheinkin's final thoughts: "It's a story with no end in sight. And, like it or not, you're in it." A must-read for students of history and science. Ages 10-up. (Sept.) ? (c) Copyright PWxyz, LLC. All rights reserved.

Gr 5 Up-"Harry Gold was right: This is a big story." So begins this depiction of the "creation-and theft-of the deadliest weapon ever invented." As he did in The Notorious Benedict Arnold (Roaring Brook, 2010), Sheinkin has again brought his superior talent for storytelling to bear in what is truly a gripping account of discovery, espionage, and revolutionary changes in both physics and the modern world. This fascinating tale, packed with a wide cast of characters, focuses mainly on three individuals: spy for the Soviets Harry Gold, leader of the Manhattan Project J. Robert Oppenheimer, and Knut Haukelid, who sabotaged German bomb efforts while working for the Norwegian resistance. Sheinkin skillfully combines lucid, conversational snapshots of the science behind the atomic bomb with a fast-paced narrative of the remarkable people who made it possible and attempted to steal it. Handsomely designed and loaded with archival photos and primary-source documents, the accessible volume lays out how the bomb was envisioned and brought to fruition. While the historical information and hard facts presented here will likely be new to the intended audience, they in no way overwhelm readers or detract from the thoroughly researched, well-documented account. It reads like an international spy thriller, and that's the beauty of it.-Brian Odom, Pelham Public Library, AL (c) Copyright 2012. Library Journals LLC, a wholly owned subsidiary of Media Source, Inc. No redistribution permitted.

Using some of the same narrative techniques he used in the YALSA Award for Excellence in Nonfiction-winning The Notorious Benedict Arnold (2010), Sheinkin shapes the story of the Manhattan Project into a dense, complicated thriller that intercuts the action with the deftness of a Hollywood blockbuster. There are more characters than readers will be able to handle, but they'll follow the three main threads. The first is a tale of spy versus spy, as Soviet informants infiltrate America's Los Alamos laboratory. The second tracks the heroism of Knut Haukelid as he parachutes into Norway to destroy Germany's heavy water plant. Most amazing is Robert Oppenheimer's assemblage of the greatest scientific minds in the U.S. (aka the world's largest collection of crackpots ), who under great duress design the most lethal weapon in history. Sheinkin's prose understandably favors plot machinations over character, and positioning photos in the back matter feels anticlimactic. Nonetheless, the painstakingly sourced narrative crackles and drives home the strange mix of pride and horror felt by the scientists who had just won the war but lost something of equal worth.--Kraus, Daniel Copyright 2010 Booklist

While comprehensive in his synthesis of the political, historical, and scientific aspects of the creation of the first nuclear weapon, Sheinkin focuses his account with an extremely alluring angle: the spies. The book opens in 1950 with the confession of Harry Gold -- but to what? And thus we flash back to Robert Oppenheimer in the dark 1930s, as he and readers are handed another question by the author: But how was a theoretical physicist supposed to save the world? Oppenheimers realization that an atomic bomb could be created to use against Nazi Germany is coupled with the knowledge that the Germans must be working from the same premise, and the Soviets are close behind. We periodically return to Golds ever-deepening betrayals as well as other acts of espionage, most excitingly the two stealth attacks on occupied Norways Vemork power plant, where the Germans were manufacturing heavy water to use in their own nuclear program. As he did in the 2011 Boston Globe-Horn Book Award winner The Notorious Benedict Arnold (rev. 1/11), Sheinkin here maintains the pace of a thriller without betraying history (source notes and an annotated bibliography are exemplary) or skipping over the science; photo galleries introducing each section help readers organize the events and players. Writing with journalistic immediacy, the author eschews editorializing up through the chilling last lines: Its a story with no end in sight. And, like it or not, youre in it. Index. roger sutton (c) Copyright 2012. The Horn Book, Inc., a wholly owned subsidiary of Media Source, Inc. No redistribution permitted.

In late December 1938, German chemist Otto Hahn discovered that uranium atoms could be split, and just a few months later the race to build an atomic bomb was on. The story unfolds in three parts, covering American attempts to build the bomb, how the Soviets tried to steal American designs and how the Americans tried to keep the Germans from building a bomb. It was the eve of World War II, and the fate of the world was at stake, "[b]ut how was a theoretical physicist supposed to save the world?" It's a true spy thriller, ranging from the football stadium at the University of Chicago to the mountains of Norway, from the deserts of New Mexico to laboratories in East Tennessee, and all along the way spies in the United States were feeding sensitive information to the KGB. Groups of photographs are sprinkled throughout the volume, offering just enough visual support for the splendid character development in the writing, and thorough documentation is provided in the backmatter. It takes a lot of work to make a complicated subject clear and exciting, and from his prodigious research and storytelling skill, Sheinkin has created a nonfiction story young people will want to read. A superb tale of an era and an effort that forever changed our world. (source notes, quotation notes, acknowledgments, photo credits, index) (Nonfiction. 10 up)]] Copyright Kirkus Reviews, used with permission.
More book reviews at iDreamBooks.com