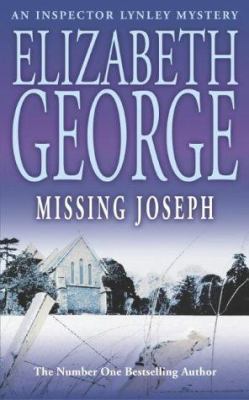 When Deborah St James hears of the unexpected death of Reverend Sage, her sadness has a very personal tinge. For their paths had crossed some months earlier at a particularly vulnerable time for Deborah, and she had found herself confessing her intimate anguish to this sympathetic stranger.

When she realizes that his death is far from accidental, Deborah, with her husband, Simon, enlists the help of Inspector Lynley, and the trio embark upon an investigation that hinges upon the overriding - and ultimately destructive - power of parental love.

The title of this layered, intricate mystery could refer to the husband and father rarely included in paintings of the Madonna and Child or to an infant victim of crib death 15 years before the grim winter of the story's setting. Both possibilities resonate as George's forensic analyst Simon St. James and Detective Inspector Thomas Lynley of New Scotland Yard, both last seen in For the Sake of Elena , unravel a case that embraces issues of sexuality, procreation and familial love. In Lancashire, in gray, bone-chilling December, the vicar of Winslough is found poisoned by water hemlock, which was served--in an apparent accident--by an herbalist, a solitary woman whose sexually precocious daughter the vicar had been counseling. Simon and his wife Deborah, troubled by their failure to conceive a child, take a long week-end at Winslough in January and are drawn into village gossip about the death, which Simon doubts could have been unintended. Irregularities in the local police follow-up (the constable is sleeping with the herbalist) prompt him to call on Tommy to reopen the case. Probing relationships between lovers and between parents and children (notable here are those between the constable and his retired-copper father, between the vicar's housekeeper and her mom, both schooled in the local witch tradition), George sustains suspense as Tommy traces the vicar's death back through London to a long-ago suicide near Truro. A liberal dose of unhappiness widely applied and a tendency to talkiness are easily tolerable in this deftly plotted, highly atmospheric novel. Author tour. (July) (c) Copyright PWxyz, LLC. All rights reserved

George's sixth book featuring Scotland Yard's Thomas Lynley displays the elegant and intelligent writing that has put her on the best-seller list before (For the Sake of Elena in 1992, A Great Deliverance in 1988). Her latest effort offers a compelling exploration of the complex emotions buried in the human soul. She examines relationships--mother-daughter, husband-wife, father-son, loved-lover--and the question of what is right versus what is moral. At the heart of the story are spirited Maggie Spence and her aloof, mysterious mother, Juliet, who's been accused of accidentally poisoning the village vicar. When Deborah St. James and her forensic scientist husband, Simon, visit the Spence's Lancashire village, they hear complaints from the locals that the murder investigation was mishandled, leaving critical questions unanswered and arousing suspicions of a cover-up. When St. James asks his old friend Lynley to help investigate further, they find that the truth is infinitely complex; even after they've identified the murderer, there's little satisfaction because, in their search, families, careers, loves, and lives have been destroyed. George is a gifted wordsmith who writes with depth, candor, and passion, and she has a rare understanding of human feelings and emotions. This powerful and moving story won't be easily forgotten. ~--Emily Melton

What price motherhood? That's the question George ponders in the sixth (For the Sake of Elena, 1992, etc.) of her multipeopled, slow-paced endeavors. Here, Simon Allcourt St. James and his chronically miscarrying wife Deborah are looking forward to a respite from the adoption question with a visit to Winslough and its vicar, Robin Sage--but Sage is dead, an apparent accident caused when aloof, mysterious herbalist Juliet Spence mistook water hemlock for wild parsnip and served it for dinner. Not bloody likely, thinks Simon, and calls in aristocratic Tommy Lynley of New Scotland Yard. Lynley not only reopens the case but takes local constable, Colin Shepherd, Juliet's lover, to task for mishandling it from the start. Was Juliet only trying to protect her 13-year- old daughter, Maggie, from Sage's inappropriate advances? Did Sage know the identity of Maggie's father, a shadowy figure Juliet has refused to talk about? Sage himself had a few secrets, including an infant son who was a cot-death fatality and a wife who leapt off a ferry and was eventually declared dead. As St. James, Lynley, and feisty Detective Sergeant Barbara Havers track Sage's last days, the constable searches for a scapegoat. The facts, however, inexorably lead back to his own lover--and the depths a mother will go to in order to deal with the loss of her child. A lesser George--with polarized characters too often engaged in lengthy, numbing speechifying (though young Maggie's school chums are a lively bunch) and with Lynley and Havers bypassed for most of the book (a likely disappointment for their fans). Still, fewer than usual over-the-top descriptive passages are a welcome relief.
More book reviews at iDreamBooks.com