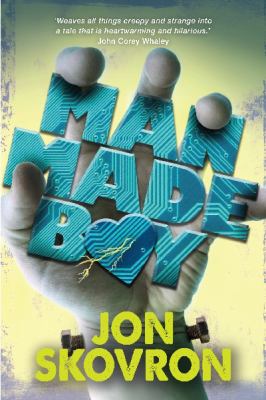 Monsters and heroes aren't born - they're made - in this brilliantly original novel and funny, fantastical coming-of-age story.

"First published in the United States in 2013 by Viking"--Title page verso.

Tired of being sheltered from humans, seventeen-year-old Boy, son of Frankenstein's monster and the Bride of Frankenstein, runs away from home and embarks on a wild road trip that takes him across the country and deep into the heart of America.

Seventeen-year-old Boy is the stitched-together son of Frankenstein's monster and the Bride of Frankenstein. He lives in a Broadway theater in New York with a host of other monsters and mythological creatures. But otherwise, he's a typical teenager, spending lots of time chatting online with friends (who don't know he's a monster) and yearning for something new and different. When he leaves home to see the outside world, he ends up having a more exciting-and far more dangerous-adventure than he ever imagined. Jon Skovron knows his characters inside and out, and it shows in his skillful narration. He brings out all the personality and emotions of his characters, as well as the excitement and suspense of the action-packed parts of his book. Best of all, Skovron creates a marvelously entertaining array of memorable character voices for the colorful cast, which includes a gruff werewolf, a sophisticated vampire, a German mechanical man, a Southern waitress, the English-accented granddaughters of Jekyll and Hyde, and at the center of it all, Boy, who sounds like a typical American teenager. With its blend of sci-fi, horror, action, romance, and-at its heart-the universal longing for identity and a place to belong, this audiobook should appeal to a wide range of listeners. Ages 12-up. A Viking hardcover. (Oct.) (c) Copyright PWxyz, LLC. All rights reserved.

Gr 7 Up-Skovron himself narrates this modern sequel (Viking, 2013) to Mary Shelley's Frankenstein, the story of Boy, the 16-year-old child of the original Frankenstein Monster and the Bride. Created from human and machine parts by his parents, Boy and an eclectic group of fairy-tale and literary characters live beneath the streets of New York City where they work for the Show-a supernatural variety act performed for humans. A genius computer hacker with online friends, Boy has dreams of "passing" in the human world. He gets his chance when, after a fight with his father, he flees the Show and goes on a cross-country road trip with the daughter of Dr. Jekyll/Mr. Hyde, though he learns that you cannot outrun your problems and sometimes going home is the only way to face them. The underlying themes of this story are especially relevant for reluctant reader boys who may also find compelling the technological turns and sometimes gruesome descriptions (this is Frankenstein's part-cadaver/part-machine son after all). The unconventional love triangle had the potential to become cliche but Skovron develops it with such tenderness that the resolution is both believable and satisfying. Skovron, but for a sometimes unexpected change of pitch within a character's vocalization, gives a listenable performance complete with an abundance of adequate accents. Recommended for middle and high school reluctant reader boys and Frankenstein fans.-Chani Craig, Turners Fall High School/Great Falls Middle School, Montague, MA (c) Copyright 2013. Library Journals LLC, a wholly owned subsidiary of Media Source, Inc. No redistribution permitted.

Boy, the son of the original Frankenstein's monster, lives a sheltered existence at The Show, a Broadway revue featuring various fantastical creatures, such as Medusa, a troupe of dancing trolls, and a siren. But Skovron (Misfit, 2011) doesn't stop there. In a clever reimagining of Shelley's Frankenstein, Boy has also unwittingly created a sentient computer virus, VI, which has escaped into the world and seeks revenge. Passing for an incredibly ugly human, Boy flees the confines of The Show as well as the consequence of his creation, embarking on a road trip to L.A., where he finds a comfortable existence in an enclave of magical creatures working in TV special effects. But Boy still has to contend with the creature he spurned and takes drastic measures to set things right. Skovron's mile-a-minute latest is overstuffed with magical creatures of every type, dangerous pursuits, revenge narratives, and teenage romances, but fantasy-loving teens will get a kick out of the action-heavy, comical supernatural mash-up. Boy learns a handy lesson about self-acceptance and bravery, too. For more connections to Shelley's classic, suggest Stephanie Hemphill's Hideous Love (2013), reviewed above.--Hunter, Sarah Copyright 2010 Booklist

Boy, the son of Frankenstein's monster, lives at a Broadway theater with the cast and crew of "The Show." Restless, Boy runs away, then tries to evade an out-of-control computer virus he created. Eventually he must face his creation to destroy it. Readers will willingly suspend disbelief for this creative sci-fi/action/road-trip/coming-of-age story that includes a colorful cast of mythical characters. (c) Copyright 2014. The Horn Book, Inc., a wholly owned subsidiary of Media Source, Inc. No redistribution permitted.

How do you circumvent the same, boring fate as your famous monster parents? Run away from home and launch a maniacal computer virus that might possibly annihilate human- and monster-kind. Oops. Seventeen-year-old Boy's name is mundane, but his life isn't. With his celebrity parents (Frankenstein's monster and the Bride of), he lives among a merry band of monsters and mythical creatures in catacombs beneath Times Square. Under the guise of a theater troupe, they perform a popular creature-feature show, their human audience blissfully unaware that the stage is populated by bona fide trolls, sirens and an egomaniacal gorgon. With their mostly scientific origins, Boy and his parents aren't fully accepted by the 100-percent myth-and-magic creatures in their commune. So rather than endure segregation--and the life his parents planned for him--Boy runs away. Tech-savvy Boy's plan to leave his stamp on the world backfires when the computer virus he engineers goes rogue, the troll he loves goes feral and returning home means facing parental wrath. From naiad to minotaur, the straight characters, gay characters, jerks, bitches, buddies and one major diva are fleshed out, not merely relying upon their exteriors for interest. And as Boy's journey takes him from the tri-state area to the West Coast, each locale rings with well-researched authenticity. A comically creepy coming-of-age road trip stitched together with action, romance, sex, combat and a couple of bootleg cocktails. (Science fiction. 12 up)]] Copyright Kirkus Reviews, used with permission.
More book reviews at iDreamBooks.com