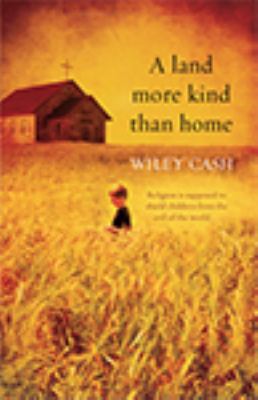 Genre/Form: Large type books.Online resources: Click here to access online Summary: One Sunday, nine-year-old Jess Hall watches in horror as his autistic brother is smothered during a healing service in the mountains of North Carolina. The unimaginable violence that follows must be untangled by a local sheriff with his own tragic past.
Tags from this library: No tags from this library for this title. Log in to add tags.

One Sunday, nine-year-old Jess Hall watches in horror as his autistic brother is smothered during a healing service in the mountains of North Carolina. Wiley Cash uses this haunting image - inspired by a horrific true event - to bring us this story about cruelty and innocence, and the failure of faith and family to protect a child.

One Sunday, nine-year-old Jess Hall watches in horror as his autistic brother is smothered during a healing service in the mountains of North Carolina. The unimaginable violence that follows must be untangled by a local sheriff with his own tragic past.

Cash's debut novel is a chilling descent into the world of religious frenzy in small town North Carolina. At the core of the book is a mysterious and demonic pastor, Carson Chambliss, an ex-con and born-again believer who uses snakes and poison to prove God's love: he seduces the town with raucous church meetings where they dance, heal, and speak in tongues until one Sunday a mute child dies during evening service. The novel is narrated from multiple perspectives, taking us deep into the minds of the dead boy's younger brother, Jess, of sheriff Barefield who investigates the crime and has his own past demons to run from, and of Adelaide Lyle, an old healer and midwife who's spent her life grasping after faith and has had her own run-ins with Pastor Chambliss. The story weaves back and forth through time, as the traumas of the past emerge to trouble the present, and the dead boy's father seeks justice through violence and drink. The distinctive and authentic voices of the characters help Cash draw a moving portrait of smalltown life and the power of belief. Though the story falls within the tradition of Southern gothic, the strangeness and horror remain distant in the characters' laconic narration. And while it gestures toward big questions about the nature of religion and the genesis of evil, it is more concerned with melodrama and tragedy. But the book is compelling, with an elegant structure and a keen eye for detail, matched with compassionate attention to character. The languid atmosphere seduces, and Cash's fine first effort pulls the reader into a shadowy, tormented world where wolves prowl in the guise of sheep. Agent: Nat Sobel, Sobel Weber Associates. (Apr. 17) (c) Copyright PWxyz, LLC. All rights reserved.

A church committed to handling poisonous snakes during worship services is the catalyst for tragedy in this debut novel. Pastor Carson Chambliss, horribly burned in a meth lab explosion, honed his preaching skills in a Georgia prison, but now he has a small North Carolina congregation in his thrall. He decides that a laying on of hands will cure an autistic boy, but instead his efforts lead to the boy's death and the destruction of a family. Cash employs three characters as narrators: Jess is the autistic boy's protective nine-year-old younger brother; Adelaide Lyle, an aged local midwife; and the county sheriff, who is drawn into the tragedy. Jess' narration is appropriately limited by his age and innocence. The county sheriff is taciturn, but Adelaide is voluble, a true southern storyteller, and her narration provides context that allows the novel to work and burnishes a compelling sense of rural place. Cash is a graceful and promising writer, and his story and characters will linger in readers' memories.--Gaughan, Thomas Copyright 2010 Booklist

Up beyond Asheville, near where Gunter Mountain falls into Tennessee, evil has come to preach in a house of worship where venomous snakes and other poisons are sacraments. Cash's debut novel explores Faulkner-O'Connor country, a place where folks endure a hard life by clinging to God's truths echoing from hardscrabble churches. With Southern idiom as clear as crystal mountain air, Cash weaves the narrative from multiple threads. Jess Hall is the 9-year-old son of Ben and Julie and beloved younger brother of gentle Stump, his mute, autistic sibling. Clem Barefield is county sheriff, a man with a moral code as tough, weathered and flexible as his gun belt. Adelaide Lyle, once a midwife, is now community matriarch of simple faith and solid conscience. Carson Chambliss is pastor of River Road Church of Christ. He has caught Stump spying, peering into the bedroom of his mother Julie, while she happened to be entertaining the amoral pastor. Julie may have lapsed into carnal sin, but she is also a holy fool. Chambliss convinces Julie to bring Stump to the church to be cured by the laying on of hands. There, Stump suffers a terrible fate. Cash's characters are brilliant: Chambliss, scarred by burns, is as remorseless as one of his rattle snakes; Addie, loyal to the old ways, is still strong enough to pry the church's children away from snake-handling services; Barefield is gentle, empathetic and burdened by tragedy. Stump's brother Jess is appealingly rendered--immature, confused and feeling responsible for and terrified by the evil he senses and sees around him. As lean and spare as a mountain ballad, Cash's novel resonates perfectly, so much so that it could easily have been expanded to epic proportions. An evocative work about love, fate and redemption.]] Copyright Kirkus Reviews, used with permission.
More book reviews at iDreamBooks.com