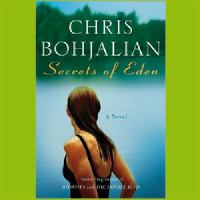 "There," says Alice Hayward to Reverend Stephen Drew, just after her baptism, and just before going home to the husband who will kill her that evening and then shoot himself. Drew, tortured by the cryptic finality of that short utterance, feels his faith in God slipping away and is saved from despair only by a meeting with Heather Laurent, the author of wildly successful, inspirational books about ... angels. Heather survived a childhood that culminated in her own parents' murder-suicide, so she identifies deeply with Alice's daughter, Katie, offering herself as a mentor to the girl and a shoulder for Stephen - who flees the pulpit to be with Heather and see if there is anything to be salvaged from the spiritual wreckage around him. But then the State's Attorney begins to suspect that Alice's husband may not have killed himself. . .and finds out that Alice had secrets only her minister knew. Secrets of Eden is both a haunting literary thriller and a deeply evocative testament to the inner complexities that mark all of our lives. Once again Chris Bohjalian has given us a riveting page-turner in which nothing is precisely what it seems. As one character remarks, 'Believe no one. Trust no one. Assume all of our stories are suspect.'

After the murder of Alice Hayward and the suicide of her husband, Reverend Stephen Drew flees the pulpit and is saved from despair only by a meeting with Heather Laurent, the author of wildly successful, inspirational books about angels. Heather, identifying deeply with Alice's daughter, Katie, mentors the young girl but soon suspects that Alice's husband may not have killed himself ... and that Alice had secrets only her minister knew.

New York Times best-selling author Bohjalian (www.chrisbohjalian.com) returns to his usual Vermont setting following his earlier exploration of Nazi Germany in Skeletons at the Feast (2008), also available from Books on Tape and Random Audio. Here, a solid cast of narrators-Mark Bramhall, Susan Denaker, Kathe Mazur, and Rebecca Lowman-masterfully unveil for listeners the secrets and truths behind an apparent murder-suicide (Bramhall and Denaker have each previously narrated works by the author). Bohjalian litters this engaging tale with angels and includes a parallel backstory of another murder-suicide. While not as strong as some of Bohjalian's earlier Vermont tales, this title is sure to appeal to most listeners. [Audio clip available through library.-booksontape.com; the Shaye Areheart: Harmony hc received a starred review, LJ 1/10.-Ed.]-Joyce Kessel, Villa Maria Coll., Buffalo (c) Copyright 2010. Library Journals LLC, a wholly owned subsidiary of Media Source, Inc. No redistribution permitted.

Bohjalian (Law of Similars) has built a reputation on his rich characters and immersing readers in diverse subjects-homeopathy, animal rights activism, midwifery-and his latest surely won't disappoint. The morning after her baptism into the Rev. Stephen Drew's Vermont Baptist church, Alice Hayward and her abusive husband are found dead in their home, an apparent murder-suicide. Stephen, the novel's first narrator, is so racked with guilt over his failure to save Alice that he leaves town. Soon, he meets Heather Laurent, the author of a book about angels whose own parents' marriage also ended in tragedy. Stephen's deeply sympathetic narration is challenged by the next two narrators: deputy state attorney Catherine Benincasa, whose suspicions are aroused initially by Stephen's abrupt departure (and then by questions about his relationship with Alice), and Heather, who distances herself from Stephen for similar reasons and risks the trip into her dark past by seeking out Katie, the Haywards' now-orphaned 15-year-old daughter who puts into play the final pieces of the puzzle, setting things up for a touching twist. Fans of Bohjalian's more exotic works will miss learning something new, but this is a masterfully human and compassionate tale. (Feb.) (c) Copyright PWxyz, LLC. All rights reserved

*Starred Review* Who killed Alice Hayward? Was it the charismatic pastor who baptized her hours before her death? Was it her abusive husband, George, who then took a gun to himself? Or was it Heather Laurent, a famous author of books about angels, who may have a demonic side? On the surface, the crime scene at the Hayward's comfortable Vermont village home appears to be a straightforward case of murder-suicide in which George Hayward strangled his wife and then blew his brains out. But to Deputy State's Attorney Catherine Benincasa, things are rarely as they seem, a view that is reinforced when Alice's diary is found with cryptic references to Reverend Stephen Drew. Suffering from his own crisis of faith, Drew is particularly susceptible to the not-unwelcome attention of Laurent, who believes she is a guardian angel sent to help Drew resolve these conflicts. Always a solid craftsman, Bohjalian brings his trademark brand of astute character development to these delightfully ambiguous portraits of suspects, victims, and accusers alike, as he drops bombshell clues through sly, innocuous asides and weaves subtle nuances of doubt and intrigue into a taut, read-in-one-sitting murder mystery.--Haggas, Carol Copyright 2010 Booklist

Bohjalian (Skeletons at the Feast, 2008, etc.) returns with a story of violence. Part I opens with the first-person testimony of Stephen Drew, minister to a Baptist congregation in Haverill, Vt., that includes Alice Hayward, whose husband George tops off years of beatings by strangling her after dinner on the day she chose to be baptized. It quickly becomes clear that Stephen and Alice had been lovers, and the weirdly distanced description of the guilt he feels about her death is creepy even before we realize that George may not have shot himself after killing his wife, and Stephen is the top suspect in the eyes of deputy state's attorney Catherine Benincasa. The narration of Part II is problematic; while Stephen is arrogant and self-absorbed, Catherine is vengefully obsessed with the violence against women she sees in her work. The portrait of the Hayward marriage that emerges from both accounts is grimly predictable (angry, controlling man; passive, isolated woman). The novel improves dramatically with the narration in Part III of Heather Laurent, author of bestselling books about angels who has a brief affair with Stephen in the aftermath of Alice's murder. Heather's father killed her mother and then himself when she was 14, and she thinks she can help both Stephen and 15-year-old Katie Hayward, Alice and George's daughter, deal with their trauma. Heather's depiction of her parents' marriage has the specificity and complexity missing from the collage portrait of the Haywards, though her fixation on angels never amounts to anything more than a fictional device. Part IV, narrated by Katie, has a somber power as the girl imagines her parents' last hours. A schematic tale of battered wives, murderous husbands and the consequences for their traumatized daughters. Copyright Kirkus Reviews, used with permission.