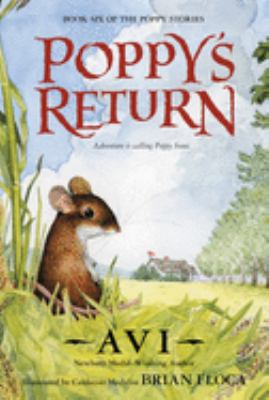 | Skunks -- Juvenile fiction | Porcupines -- Juvenile fictionDDC classification: 813 Summary: Poppy, accompanied by her troublesome son Junior, his skunk friend, and Uncle Ereth the porcupine, responds to a summons to return to her ancestral home, Gray House, to save the mice there from destruction by a bulldozer.
Tags from this library: No tags from this library for this title. Log in to add tags.
Fiction notes: Click to open in new window
No physical items for this record

There's trouble at Gray House, the girlhood home that Poppy left long ago. Poppy's family has called her back to save them all--mother, father, sisters and brothers, and dozens and dozens of deer mouse cousins.

Poppy invites her rebellious son, Junior, to join her on the long trip across Dimwood Forest, hoping the journey will bring them closer together.

But with Junior's skunk pal, Mephitis, and Ereth, the cantankerous porcupine, in tow--sugared slug soup!--Poppy and Junior may be in for unexpected adventure.

Poppy, accompanied by her troublesome son Junior, his skunk friend, and Uncle Ereth the porcupine, responds to a summons to return to her ancestral home, Gray House, to save the mice there from destruction by a bulldozer.

Gr 3-6-In this latest installment in the series, Avi gives his animal characters an uncomfortable humanity. Poppy, now the mother of 11, faces middle age with sighs and regrets while her troublesome son Ragweed Jr. suffers the pangs of adolescence. When humans threaten to destroy Poppy's parents' home, she and Ragweed make the journey together, developing respect for one another's courage. This book lacks the delightful charm of the previous books. The deer mouse's midlife crisis and her son's adolescent rantings aren't well suited to their animal natures and won't be understood by the target audience, and the dialogue ranges from trite to grating. Avi devotes over half the book to the family conflict and very few pages to the attempted destruction of the farm, which, when it does come, is too facilely resolved. While Ereth the porcupine's colorful metaphors will please readers, there is little else to hold this book together. Unless series readers demand it, look to other titles such as M. I. McAllister's Urchin of the Riding Stars (Hyperion, 2005) for animal adventure.-Caitlin Augusta, The Darien Library, CT (c) Copyright 2010. Library Journals LLC, a wholly owned subsidiary of Media Source, Inc. No redistribution permitted.

Gr. 4-6. In the fifth book in the series that began with Poppy 0 (1995), mouse Lilly urgently requests that her sister, Poppy, join her in visiting their childhood home, Gray House. Poppy travels with her rebellious teenage son, Junior, and his enigmatic friend, Mephitis, a skunk. Soon after her arrival, Poppy is hailed as the new family leader and saddled with the seemingly impossible task of saving the rundown house from destruction by the bulldozer that sits nearby. One of the book's main achievements (and an odd one it is, for a children's book) is the portrayal of Poppy's position as a member of the "sandwich generation," caught between the demands of mothering a smoldering teenager and managing an unreasonable father. Whether children will find this challenge of interest is questionable, but series fans will probably read this book just for the pleasure of keeping up with Poppy; they'll enjoy the occasional humor as well. --Carolyn Phelan Copyright 2005 Booklist

(Intermediate) In her previous adventures, heroic Poppy, a deer mouse, killed a tyrannical owl (Poppy, rev. 1/96) and battled territorial beavers (Poppy and Rye, rev. 7/98). In this fifth tale, Poppy again confronts challenging situations -- this time involving her own family. Poppy's son Ragweed Junior has become a rude and rebellious teenager and a constant source of worry to his parents; in addition, Poppy's father, Lungwort, is ailing, and she is summoned back to her childhood home where a bulldozer threatens to demolish Gray House. Surrounded by old friends and family (including the bombastic Lungwort), Poppy gains a new perspective on her son's behavior as she navigates her own complicated feelings about seeing her family again. Avi gives his animal characters dimension, even surly Junior. Although Poppy spends most of the story reacting to events, there's still enough external drama to keep readers turning the pages, and bad-boy Junior is hard to resist. As usual, Floca's attentive pencil drawings are a fitting accompaniment to the story. (c) Copyright 2010. The Horn Book, Inc., a wholly owned subsidiary of Media Source, Inc. No redistribution permitted. All rights reserved.

Avi's intrepid deer mouse sets out for a visit home in this fifth Dimwood Forest adventure, taking along her mutinously adolescent son Ragweed Junior in hopes of promoting some bonding. The ominous news that a bulldozer (owned by the "Derrida Deconstruction Company,") has been parked next to Gray House, the ramshackle farmhouse where Poppy's pompous father and his multitudinous descendants still live, prompts the trip. Thanks to her previous exploits, Poppy arrives to a hero's welcome, but barely has time to do more than organize a frantic evacuation before, in a slapstick climax, Junior, his (literally) unsavory buddy Mephitis the skunk and trash-mouthed Ereth the porcupine manage to start up the 'dozer and convert the house into a pile of kindling--which is to say, a mouse condo. The plot, though, takes second fiddle to the author's proposition that parents too can be "Sick," (i.e., cool) and teens, despite unappealing personal habits, not quite as hopeless as they might seem. Well, it's a worthy thought, and, well supplied with Floca's ground-level vignettes, agreeably presented. (Fiction. 10-12) Copyright ©Kirkus Reviews, used with permission.
More book reviews at iDreamBooks.com