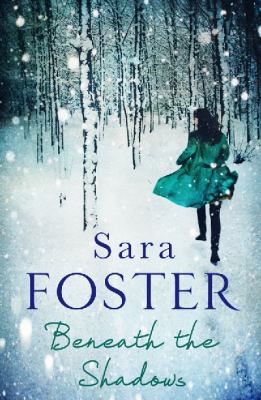 Beneath the shadows / Sara Foster.

| North Yorkshire (England) -- FictionGenre/Form: Thrillers (Fiction)DDC classification: A823.4 Summary: When Grace's husband, Adam, inherits a cottage on the North Yorkshire moors, they leave London behind to try a new life. But a week later Adam vanishes, leaving their baby daughter on the doorstep. The following year Grace returns to the tiny village of Roseby. She is desperate for answers but it seems the village is unwillling to give up its secrets.
Tags from this library: No tags from this library for this title. Log in to add tags.

When Grace's husband, Adam, inherits a cottage on the Yorkshire moors, they leave London behind to try a new life. A week later, Adam disappears. The following year, Grace returns with her baby daughter, Millie . She is desperate for answers, but resigned to preparing the cottage for sale. With no-one prepared to divulge their secrets, Grace finds herself unwilling to trust anyone. Then, just as snowfall threatens to cut her off from the rest of the world, she makes a terrible discovery. In the aftermath, she realises that she has been looking in the wrong place for answers all along. In the wild winter weather she sets out to reclaim her daughter from the one person seemingly intent on taking Millie away, praying that she will reach them in time. .

When Grace's husband, Adam, inherits a cottage on the North Yorkshire moors, they leave London behind to try a new life. But a week later Adam vanishes, leaving their baby daughter on the doorstep. The following year Grace returns to the tiny village of Roseby. She is desperate for answers but it seems the village is unwillling to give up its secrets.

Grace decides to return to the remote Yorkshire village where her husband, Adam, disappeared the previous year, determined to find answers. She can't believe Adam would walk out on her and their infant daughter, Millie. Perhaps there are clues hidden in their quaint cottage, amid the boxes of stuff left from Adam's grandparents. Or maybe the neighbors know something they aren't saying. As Grace investigates, her friends and family worry about her mental health and physical well-being, especially as she becomes entangled in a local family's domestic issues. Life in a small village turns out to be more complicated than she had expected. Verdict Advertised as a gothic thriller, this series debut fails to create a creepy atmosphere or much of a suspenseful mystery. It is much better at showing a woman on the edge, as she stumbles her way to the truth. Readers appreciating a touch of gothic mystery to their suspense fiction may enjoy Grace's story.-Laurel Bliss, San Diego State Univ. Lib. (c) Copyright 2012. Library Journals LLC, a wholly owned subsidiary of Media Source, Inc. No redistribution permitted.

The North Yorkshire moors provide the atmospheric backdrop for Australian author Foster's otherwise unremarkable debut, a suspense thriller. One day after Londoner Adam Lockwood moves with his family into Hawthorn Cottage, a house he inherits in the village of Roseby, he disappears after taking a walk with his baby daughter, Millie. The police suspect that he's abandoned his family, but his wife, Grace, is convinced that Adam would never have left willingly. After spending a year with her parents in France, Grace returns to Roseby in search of answers. The tight-knit community makes little effort to welcome her, though the town matriarch, Meredith Blakeney, is unusually interested in Hawthorn Cottage. Grace strikes up a friendship with Ben, another apparent outcast in Roseby, who offers to help her with renovations, while she sifts through years of secrets squirreled away in the cottage and the village itself. Foster nicely evokes the isolation of the moors, but the less than surprising reveal behind Adam's vanishing act fails to satisfy. Agent: Catherine Drayton, InkWell Management. (June) (c) Copyright PWxyz, LLC. All rights reserved.

A young woman returns to the Yorkshire moors in hopes of discovering what happened to her missing husband. Grace and Adam gave up their busy London lifestyle to move with their baby daughter, Millie, to Hawthorn Cottage, Adam's deceased grandparents' home in a remote moorlands village. They hardly had time to unpack before Adam went missing. Millie, in her pram, was left on the doorstep, but despite a massive search, Adam was never found, and the police suspected he might have done a runner. A year later, Grace returns, determined to find out the truth. Village doyen Meredith, a recent widow who supported Grace until her parents arrived, helps her to ease back into village life. Meredith has a large family, and her girls all spent time with Adam back when he was a young man living with his grandparents. When an estate agent suggests that Grace could rent out the cottage for good money if it were renovated, she finds Ben, a housesitting architect looking for a project. And Grace's sister Annabel, a journalist who wants Grace to leave as soon as possible, arrives to help go through stacks of boxes in the attic and cellar. Grace's search of the boxes reveals several things she didn't know about Adam's past life, and her interactions with Meredith's family reveal even more. Picking through the detritus of the past leads to a shocking discovery that will help solve the mystery of Adam's disappearance. Foster's second (Come Back to Me, 2010) page-turning tale of suspense set on the snow-covered moors has something for everyone: mystery, romance, paranormal activity and mortal danger. ]] Copyright Kirkus Reviews, used with permission.
More book reviews at iDreamBooks.com