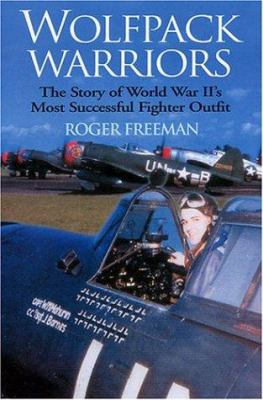 In the later years of the Second World War Germany was subjected to a tremendous onslaught by the bomber commands of both the RAF and USAAF, as well as being assaulted by land. For these twin strategies to succeed the Allies had to obtain and hold air supremacy over Western Europe. That this was achieved was predominantly the work of USAAF long-range fighters operating from the eastern shores of England, who thereby made a major contribution to victory.

The 56th Fighter Group, or Zemke's Wolfpack as they became known, more than any other, led the way and at the end of hostilities had the highest score of enemy aircraft shot down as well as having produced the top American fighter aces of the conflict.

This is an account of why and how this famous unit became so successful and the way in which its ethos and spirit was forged. Although following a chronological path of training and operations, this book is not a dedicated unit history, the narrative being primarily concerned with the personnel, both pilots and ground crew. Some one hundred veterans have been contacted by the author over the past ten years of his research and many of their recollections and photographs are woven into the story, reflecting in candid fashion the thoughts and actions of the young fighting men of this ground-breaking unit.

Roger A. Freeman is the author of more than fifty books on Second World War subjects and specialises in the men, aircraft and operations of USAAF.

His interest stems from boyhood experiences including working on and around an airfield which housed the organisation that is the subject of this book.