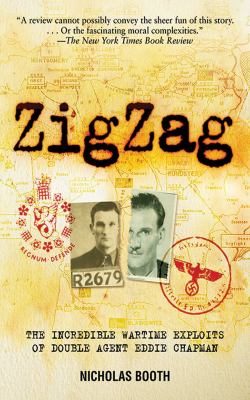 DDC classification: 940.548641092 Summary: Traces the career of an MI5 double agent who conducted dangerous assignments during World War II, describing his efforts to support England and his relationship with a German handler that led to his receipt of the Iron Cross for services to the Reich.
Tags from this library: No tags from this library for this title. Log in to add tags.
Fiction notes: Click to open in new window

The most remarkable double agent of World War II, Eddie Chapman was witty, handsome, and charming. Too bad he was also a con man, womanizer, and safe-cracker. To the British, though, he was known as ZigZag, one of MI5's most valuable agents. To the Abwehr--German military intelligence--he was known as Fritzchen (Little Fritz), and was believed to be one of their most valued and trusted spies. For three long years, Eddie played this dangerous double game, daily risking life and limb to help the Allies win the war. He was so charming that his German handler, Baron Stefan von Gröning, thought of Fritzchen as the son he never had. The Germans even awarded him the Iron Cross for spying for the Reich! They sent him to Britain, with the mission to blow up the De Havilland aircraft factory. How he and MI5 convinced the Germans that he had accomplished his mission stands as one of history's greatest acts of counterintelligence.

Until now, Eddie Chapman's extraordinary double life has never been told, thwarted by the Official Secrets Act. Now all the evidence--including Eddie's MI5 file--has finally been released, paving the way for Nicholas Booth's enthralling account of Eddie's long and extraordinary life. A film of ZigZag is in the works with Tom Hanks producing and Mike Newell directing.

First published in the United Kingdom by Portrait Books

Traces the career of an MI5 double agent who conducted dangerous assignments during World War II, describing his efforts to support England and his relationship with a German handler that led to his receipt of the Iron Cross for services to the Reich.

Sixty years after his incredible career as a double agent for the British, Eddie Chapman (1914-97) is the subject of two new books charting his experiences as one of World War II's most amazing spies. A cad, bounder, womanizer, safe cracker, and general bad guy before the war, Chapman was in a jail on the Channel Island of Jersey awaiting trial when the Germans took over the island and decided that he might make a good spy for them. After training in Germany, he was parachuted back into England to blow up an airfield. Instead, he immediately turned himself into the authorities and cooperated with MI5 (the UK's security intelligence agency) as one of England's double agents. The Germans were fooled into thinking that Chapman had indeed destroyed the airfield and rewarded him upon his return to Germany with the Iron Cross. Sent back to England, Chapman spent the latter part of the war giving incorrect information to the Germans about the success of their V-1 and V-2 rockets. He wired inaccurate coordinates to the German rocket launch crews who then sent their rockets to places of minor importance, causing little damage. Chapman wrote his own account in 1966, and a movie about his life titled Triple Cross appeared in 1967. Both Booth and Macintyre tap many of the same original sources, and both interviewed Chapman's widow for their respective accounts. Of the two accounts, Macintyre (associate editor, the London Times; The Man Who Would Be King: The First American in Afghanistan) displays a surer hand on the overall historiography of wartime spying and probably has an edge. But Booth, whose career has been in broadcasting and journalism, is a skilled writer who manages to weave Chapman's complex story into a readable volume that both entertains and informs. Chapman's wartime exploits would be unbelievable were they not verified by many sober debriefing accounts residing in numerous MI5 files available to any who want to look. Large public and academic libraries should purchase if budgets allow, but if they need to choose, they should pick Macintyre. Chapman's is a most unusual story that will intrigue most readers.-Ed Goedeken, Iowa State Univ. Lib., Ames (c) Copyright 2010. Library Journals LLC, a wholly owned subsidiary of Media Source, Inc. No redistribution permitted.

Broadcaster and author Booth (The Encyclopedia of Space) mines the newly released World War II records of Britain's Secret Intelligence Service (MI5) for this lively and sympathetic account of celebrated double agent Eddie Chapman. A petty criminal, Chapman was incarcerated in a Jersey jail when the Germans occupied the Channel Islands in 1940. After his release, he offered to work for German military intelligence and received training as a saboteur and spy in occupied France. He parachuted into England in 1942 with orders to blow up an aircraft factory, but contacted British intelligence once on the ground. Despite their misgivings-his handlers variously described Chapman as "a very strange character" and "a man without any scruples"-MI5 employed him as a double agent for the remainder of the war. There are legitimate questions as to the enigmatic Chapman's motivation, but Booth, who collaborated with Chapman's widow, Betty, invariably sides with the double agent against his critics. In Booth's judgment, Chapman was the "most remarkable spy of the Second World War," and his treatment by British intelligence was "shameful." Whether rogue or patriot, his story makes for intriguing reading, but Booth's transparent cheerleading for Chapman detracts from an otherwise enjoyable biography. (Sept.) (c) Copyright PWxyz, LLC. All rights reserved

Booth's Zig Zag is the longer of the two, going into greater detail about Eddie's life before he became a spy and into the histories of some of the people he knew and worked with. Drawing heavily on the memories of Eddie's widow, Betty Chapman, as well as recently declassified documents (such as Chapman's MI5 file), the book tells a very personal, intimate story. Booth also takes pains to remind us, from time to time, that Eddie, who wrote or authorized several autobiographical works in the 1950s and 1960s, was a habitual and expert liar and that nothing he says about himself should be taken at face value. The book, therefore, has an air of mystery about it, and despite the author's extensive documentation, we wonder at the end if we have yet heard the real story of Eddie Chapman.--Pitt, David Copyright 2007 Booklist

This cinematic tale of World War II espionage is a one-man spy-versus-spy thriller--spying on behalf of both Britain and the Nazis was the same dashing rascal. Eddie Chapman, born in a small English village in 1914, was known to his German intelligence handlers as "Little Fritz." To his British MI5 controllers, he was "ZigZag," and he was a fearless hero, a womanizing rogue and a thief. The cheeky fellow started his career as a safecracker pursued by Scotland Yard before he joined the Coldstream Guards. Then came the war and, fresh from a Parisian prison (where he enjoyed erotic assignations with female inmates), he was recruited for the Führer's service. Under the supervision of a jolly spymaster, he learned how to parachute at night as well as the arcane arts of hidden writing, clandestine radio communication and explosive detonation. When he was dropped into the English countryside, however, he reported directly to His Majesty's Secret Service. Because the Nazi's Enigma code had been cracked, he or someone much like him was expected. As stipulated by a formal contract with the Abwehr, he was to demolish an aircraft factory. The destruction was cleverly faked by film studio artists, and back to the Germans went the double agent to much praise and further assignments. He was to sink a British freighter; he was to report on the effectiveness of the new buzz bombs. For false information, Little Fritz received the Iron Cross. In Berlin in 1944, he saw how the war was going and soon returned home and retired by MI5. Years later, the old English agent recalled meeting Hitler. After a botched attempt by others at a movie of his romantic exploits, ZigZag died peacefully in 1997. Booth offers a wonderful spy story based chiefly on Chapman's memoirs, his widow's recollections and, best of all, on files recently freed under Britain's Official Secrets Act. (Chapman's story is so good that a similar book, Agent ZigZag, by Ben Macintyre, will be published by Harmony Books in October 2007.) A fascinating chronicle of a largely unappreciated detail of The War. Copyright ©Kirkus Reviews, used with permission.
More book reviews at iDreamBooks.com