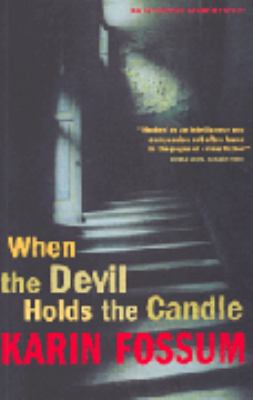 When the devil holds the candle / Karin Fossum ; translated from the Norwegian by Felicity David.

Pulling a handbag from a pushchair handle, two teenage trouble-makers, Zipp and Andreas, unwittingly commit murder when the baby inside is thrown to the ground. Unaware of what has happened, the pair move on to their next target. Having followed home Irma, an elderly lady who lives nearby, Andreas enters her house armed, with his trusty flick-knife. Zipp waits nervously outside, but his friend never reappears. He will never see him alive again. Fossum toys with the roles of victim and killer and pens the inner monologue of her characters to chilling effect. There are no red herrings in this narrative as the crime is played out on the page, but it is the mental processes behind the murderer's sinister act that are the real pieces of this puzzle. Gradually, they fall into place as Irma and Andreas talk to each other. We are forced to question the familiar stereotypes: people are not always what they seem and it is not always bad people who do bad things. There is no reason for Sejer and his colleague Skarre to see a connection between the infant's death and the reported disappearance of a town trouble-maker. With Zipp too frightened to come forward, the police must wait for the evidence to present itself before they can begin to comprehend the unsettling nature of the case on their hands.

Best friends Andreas and Zipp are 18 and cruise around town looking for beer, fun, and trouble. First they steal a wallet from a young mother whose baby carriage goes over a cliff during the mugging. After drinking that money away, the boys follow an old lady to her home. When Andreas's mother reports him missing, Inspector Konrad Sejer suspects something is terribly wrong. But this is not your usual police procedural-Fossum's third Sejer novel (after He Who Fears the Wolf) is psychological suspense at its best. Her dark story focuses on the dilemma facing those whose lives have come to a point where a decision must be made and a new direction taken. Several of Fossum's characters handle this conflict in distinctive ways. Not for the faint of heart, this book will satisfy patrons who cannot get enough of Minette Walters and Barbara Vine. [The Nordic crime wave continues with ?ke Edwardson's Never End, reviewed below.-Ed.] (c) Copyright 2010. Library Journals LLC, a wholly owned subsidiary of Media Source, Inc. No redistribution permitted.

Skillful characterization and revealing detail lift Fossum's third mystery to be published in the U.S. featuring thoughtful, intelligent Insp. Konrad Sejer (after 2005's He Who Fears the Wolf). Handsome Andreas Winther, a self-absorbed, dangerously restless 18-year-old, manages to draw both sympathy and disgust from the reader. He roams the streets of an unnamed provincial Norwegian town in the evenings, accompanied by his socially inept friend, Sivert "Zipp" Skorpe, and fueled by the enormity of a secret he keeps. One evening, after mugging a young mother, Andreas decides to break into an old woman's house to rob her. His intended victim, Irma Funder, has a complicated health situation and a more complicated psyche. In defending herself, Irma pushes Andreas down the cellar stairs, where he lands unnaturally twisted, unable to move but alive. What develops between the immobile boy and the reclusive woman is a bizarre, excruciating, curiously tender relationship that serves as a pathetic and poignant balance to the hunt for Andreas conducted by Sejer and his police colleague, Jacob Skarre. (July) (c) Copyright PWxyz, LLC. All rights reserved

Fossum's Konrad Sejer procedurals, set in Oslo, are among the many Scandinavian mysteries that have followed Henning Mankell's Kurt Wallander series to the U.S. Her first novel to appear here, Don't Look Back (2004), was very much in the world-weary Wallander mold, with Sejer investigating a 15-year-old girl's murder and finding multiple layers of ambiguity. Although Sejer is present again this time, the story is much less like a contemporary European procedural and more like a Ruth Rendell psychological thriller. As Sejer and his colleague Jacob Skarre investigate a mugging and the disappearance of a delinquent, the reader sees what the coppers don't, following the tragic events in the life of the delinquent and the very disturbed elderly woman he encounters. At times this story is almost unendurably painful, as our sense of the inevitable clashes with our uncertainty about the outcome. All of the characters are victims of a kind, and all are trapped in one way or another. We feel equally trapped, by our proximity to so many lives gone wrong, and by our inability to close the book. --Bill Ott Copyright 2006 Booklist

Where does Fossum get her macabre ideas? In his third case, Inspector Konrad Sejer (He Who Fears the Wolf, 2005, etc.) searches his Norwegian town for a missing delinquent who's being kept right under his nose. Andreas Winther and Sivert Skorpe, better known as Zipp, have simple tastes. They like to watch Blade Runner, drink and steal from locals. (Andreas also likes Zipp in a special way, but Zipp doesn't know that.) One night, fresh from a routine purse-snatching that will have devastating consequences, Andreas strolls into the dark house of 50-ish Irma Funder, who sells curtains and bed linens, expecting an easy score. Zipp waits outside, but Andreas doesn't return, and he doesn't show up for work the next day, making Zipp uneasy and sending Andreas's mother into a tizzy. Though they aren't alarmed that an 18-year-old boy would stay out all night, Sejer and Jacob Skarre investigate. But Fossum, who writes like Ruth Rendell with the gloves off, is less interested in their viewpoint than in the psychodrama unfolding between Andreas and Irma, who's pushed him down the stairs and paralyzed him, turning him into a helpless audience for whatever she cares to say. Fossum's characters are as thin-skinned as anatomy charts. It's no wonder she knows things about them no one else has ever seen--except for the Devil who holds a candle to them. Copyright ©Kirkus Reviews, used with permission.
More book reviews at iDreamBooks.com