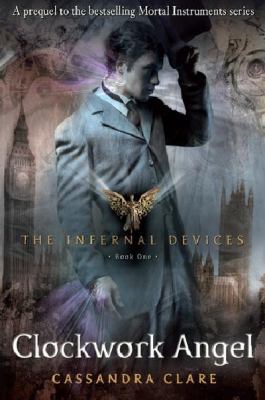 Prequel to: City of bones.

When sixteen-year-old orphan Tessa Fell's older brother suddenly vanishes, her search for him leads her into Victorian-era London's dangerous supernatural underworld, and when she discovers that she herself is a Downworlder, she must learn to trust the demon-killing Shadowhunters if she ever wants to learn to control her powers and find her brother.

When sixteen-year-old orphan Tessa Fell's older brother suddenly vanishes, her search for him leads her into Victorian-era London's dangerous supernatural underworld, and when she discovers that she herself is a Downworlder, she must learn to trust the demon-killing Shadowhunters if she ever wants to learn to control her powers and find her brother.

This first book in Clare's Infernal Device series, a prequel to her bestselling Mortal Instruments books, opens as Tessa's pleasant life in 1878 New York is coming to an end when her guardian aunt dies. Upon her arrival in London, where her brother lives, Tessa is kidnapped by the Dark Sisters, who force her to learn to use a rare power-shape-shifting-she didn't know she had. Her rescue by a young man named Will leads her to the Shadowhunters-Nephilim descended from humans and angels-who enforce the magical Accords against demons and other creatures. Tessa gets caught between the various players seeking to use her amid a plot to conquer Britain. The events often read as bleakly as the Victorian London weather, punctuated by Clare's trademark humor, empathy, and authentic characters, who fight their own flaws and tragic pasts as often as they do evil. Mysteries, misdirection, and riddles abound, and while there are some gruesome moments, they never feel gratuitous. Fans of the Mortal Instruments series and newcomers alike won't be disappointed. Ages 14-up. (Aug.) (c) Copyright PWxyz, LLC. All rights reserved

Gr 9 Up-Readers of Clare's "Mortal Instruments" series (S & S) will recognize the warlock Magnus Bane and the demon-killing Nephilim, but instead of modern-day New York, this book is set in Victorian London and takes a look at the historical role of the Shadowhunters (aka demon hunters). Tessa Gray, 16, has traveled from America to London to join her older brother. But instead of Nathaniel, she is greeted by the Dark Sisters, two evil women who kidnap her in order to develop her previously unrealized ability to change shape into another person. Their employer, a shadowy figure ominously referred to as the Magister, wishes to exploit Tessa's great power. The teen is rescued by a group of Shadowhunters who are perplexed as to the origin of her ability and unsure about whether her nature is one of good or evil. Together they must discover the identity of the Magister and thwart his devious plot that threatens London. Vampires, warlocks, demons, and steampunk elements such as clockwork monstrosities abound in this supernatural offering. From the erratic and volatile-yet charming-Will to the bumbling and amiable inventor, Henry; to the ethereal and gentle Jem, Clare has made each character unique. The action-heavy plot takes off from the first page, propelling readers toward a dramatic conclusion that fails to answer all the questions raised during the course of the tale, leaving the door wide open for the next installment. Give this book to fans of Libba Bray's A Great and Terrible Beauty (Delacorte, 2003).-Heather M. Campbell, formerly at Philip S. Miller Library, Castle Rock, CO (c) Copyright 2010. Library Journals LLC, a wholly owned subsidiary of Media Source, Inc. No redistribution permitted.

After her aunt passes away, American Tessa Gray looks forward to starting a new life with her brother in Victorian England. Little does Tessa know that when she travels to London, she will discover new skills and an underground world filled with shadowhunters, warlocks, vampires, and the occult. Dark secrets will be revealed, and her life and soul will be in danger from a mysterious figure called the Magister and all who call him master. Will her new friends save her or betray her for her newfound powers? Artist Baek has done an excellent job of adapting the complex plot of the first book in Clare's popular Infernal Devices series into a completely enjoyable manwha. The artwork is expressive and dynamic, the pacing is quick, and the dialogue conveys all of the snarkiness of the original book. This is an excellent companion to the original novels and could be a helpful starting point for weaker readers who are fans of steampunk, fantasy, and paranormal reads.--Mack, Candice Copyright 2010 Booklist

Prim, bookish sixteen-year-old Tessa discovers she can shape-change. Only the demon-fighting Shadowhunters, kindhearted Jem, and cruel, handsome Will, can protect her from the supernatural underworld. Steampunk elements and the gritty Victorian London setting distinguish this prequel from the Mortal Instruments series; some plot elements are unoriginal or recycled. Nevertheless, fans will enjoy this page-turning urban fantasy. (c) Copyright 2011. The Horn Book, Inc., a wholly owned subsidiary of Media Source, Inc. No redistribution permitted.