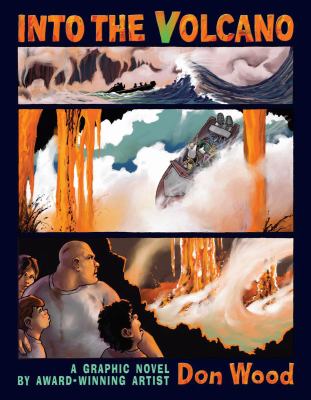 Into the volcano : a graphic novel by Don Wood.

| Caricatures and cartoons -- Juvenile fictionGenre/Form: Graphic novels. | Action and adventure fiction. | Children's stories -- Comic books, strips, etc. | Children's fiction.Summary: While their parents are away doing research, brothers Duffy and Sumo Pugg go with their cousin, Mister Come-and-Go, to Kokalaha Island, where they meet Aunt Lulu and become trapped in an erupting volcano.
Tags from this library: No tags from this library for this title. Log in to add tags.
Fiction notes: Click to open in new window

The volcano is erupting, and brothers Sumo and Duffy are trapped inside a deep lava tube--almost certain death. How did they get here? A vacation "hike" turned out to be a cutthroat search for their missing family fortune.

In a wildly dangerous twist of events, the boys try to escape--but rivers of lava are blocking their exit! The remote island of Kocalaha is threatening to explode at any minute. Will the boys survive?

Don Wood's rip-roaring adventure keeps readers hooked and turning the pages in this cinematic graphic novel that garnered outstanding critical acclaim. As one reviewer wrote about this book, "the American Library Association will either have to start handing Caldecott Medals over to comic books or create an entirely new award for them."

Into the Volcano is a roller coaster read for all ages, by an internationally acclaimed artist who has created scores of bestselling picture books, published in more than twenty languages around the globe.

While their parents are away doing research, brothers Duffy and Sumo Pugg go with their cousin, Mister Come-and-Go, to Kokalaha Island, where they meet Aunt Lulu and become trapped in an erupting volcano.

My kids and I were mesmerized by this fast-paced book. The plot centers on two brothers: adventuresome Duffy and reticent Sumo. The two are whisked from their gray, North Dakota-esque world to Kocalaha (part of Borneo?), where they are taken, literally, into a volcano. The larger, inventive story involves family factions warring over some precious green stones inside a cave over which the volcano is erupting. The story of Sumo's emergence as a brave young man, however, is the emotional narrative that speaks to the stoic in us all. Sumo starts out as a frightened boy, hiding his fears under a veneer of suspicion. But when Duffy is injured in the volcanic spelunking escapades, Sumo sprouts brass balls and effects a daring rescue quickly learning to put his emotions away or use them to help him solve the problem. While Wood's detailed illustrations, emphasized with vibrant colors, carry the story quite effectively, they often make characters appear crude or brutish. The scenery-lava, cave innards, ocean vistas, and jungle scenes-is a character all its own.-Douglas Lord, Connecticut State Lib., Middletown (c) Copyright 2010. Library Journals LLC, a wholly owned subsidiary of Media Source, Inc. No redistribution permitted.

Wood's (The Napping House) first foray into graphic novels is a visual stunner. Sumo and Duffy Pugg are called out of class by their father, who insists they immediately go off with their long-lost, oddly named cousin, Mr. Come-and-Go, to visit their (also unknown to them) Aunt Lulu on Kocalaha, the island where their absent mother was born. Blunt, bald and broad as a refrigerator, Come-and-Go does not inspire confidence in Sumo, the less adventurous of the brothers, and his reluctance looks reasonable when Lulu hustles them off on a mysterious expedition, which involves entering Kocalaha's volcano as it is erupting. Wood's full-color digital illustrations vividly depict fabulous scenery--lava flows, ocean swells, lush foliage--and the muscularity of the action will impress thrill-seeking readers. The boys repeatedly face peril, including a terrifying and surreal episode in which deathly specters surround Sumo while he tries to rescue Duffy. The plot does not answer all the questions it raises: the boys' trip is eventually explained, but not why their father has sanctioned it. The audience will likely be too busy living vicariously through Sumo and Duffy's ultimately excellent adventure to mind. Ages 7-up. (Oct.) (c) Copyright PWxyz, LLC. All rights reserved

Gr 5-8--This intense mystery-adventure coming-of-age chapter book is done in comic-book style--something of a departure for Wood. Two brothers, Duffy and Sumo, are sent to Hawaii to visit their mysterious aunt, who hustles them off on a perilous expedition into the bowels of an erupting volcano, accompanied by strangers whose skills are obvious, but whose trustworthiness is not. The dangers the boys face are terrifying, especially an interlude during which Sumo, wracked by guilt and indecision after he thinks his brother has fallen to his death, is trapped in the dark on an underground cliff and is visited by the specter of Death. That the children, who appear to be 10 or 12, have been exposed to such peril knowingly by an adult who has been entrusted with their care is a dark vein running through the story. Wood's vividly colored artwork brings the perils the siblings face into startling focus. Keenly observed depictions of the Hawaiian landscape and geological processes lend an impressive veracity to this exciting and unusual offering. It is a rare example of a graphic novel for young people that is neither manga nor mainstream.--Paula Willey, Baltimore County Public Library, Towson, MD (c) Copyright 2010. Library Journals LLC, a wholly owned subsidiary of Media Source, Inc. No redistribution permitted.

*Starred Review* Brothers Duffy and Sumo Pugg embark on an adventure after their eccentric aunt invites them to come see the island of Kocalaha, their mother's birthplace. Duffy, excited to get away from the gloomy winter in their hometown, jumps at the chance, but Sumo is worried: a lot of things could go wrong so far away from home. The boys are taken into the heart of a volcano to explore and learn more about their heritage, but the seemingly dormant volcano is in the midst of waking up. The situation quickly becomes perilous, and between the volcano's power and shocking revelations of family secrets, it appears neither boy will make it out alive. With such a thrilling story, Wood scores points for both pacing and characterization. The action moves along at breakneck speed, and through all of the twists and turns, the reader is left wondering if the boys will survive. The art is beautifully rendered in thick bold lines and a rich color palette and is a nice break from the mainstream comic style. Although this adventure may be a little too scary for younger readers on their own, it makes a fun book for parents and children to share together.--Coleman, Tina Copyright 2008 Booklist

(Intermediate, Middle School) Wood, the latest picture-book illustrator to cross over to the graphic novel format, delivers a story with everything a boy could wish for: an exotic setting, a colorful cast of characters, a suspenseful mystery, and a heart-stopping adventure with opportunities for bravery and heroism at each twist of the plot. It's a tried-and-true formula that has worked for everything from the Hardy Boys to Tintin, and it works here, too. While visiting relatives on a remote island, two brothers embark on a seemingly harmless camping/hiking trip that quickly turns into a dangerous game of treachery, kidnapping, double-crosses, and spectacular natural danger. When their journey into the heart of an erupting volcano grows increasingly bizarre, the boys suspect their aunt and cousin of foul play and run away. Unexpectedly reunited with their mother, a renowned volcanologist secretly working to extract a precious new substance from the volcano, they finally get answers to their questions. The pictures are perfectly suited to the story, vividly capturing plot, characters, and setting with bold lines, dramatic colors, and creative special effects that make tangible the brothers' peril. This is Wood's first foray into the medium of comics; let's hope that it won't be his last.From HORN BOOK, (c) Copyright 2010. The Horn Book, Inc., a wholly owned subsidiary of Media Source, Inc. No redistribution permitted.

From Caldecott Honoree Wood comes an inventive and imaginative graphic adventure. Brothers Duffy and Sumo Pugg are mysteriously pulled out of class one day and sent to the island nation of Kokalaha to stay with unfamiliar family members. The boys meet Auntie, the shady matriarch of the household (who resembles Ursula from Disney's Little Mermaid), who sends the boys and their newfound cousins on an expedition into a volcano. Danger ensues, and the boys must fight for their survival, and, ultimately, discover the truth propelling their quest. For the first time, the boys must work together and make their own choices outside of adult supervision. Wood's illustrations of the fictional Kokalaha are particularly clever and lush, though his world-building is somewhat lacking in its development and could leave its readers with questions. The narrative moves along swiftly and incorporates elements of fantasy, demanding that the audience suspend disbelief and roll with the punches. Those who do will find a rollicking, fast-paced story that resolves itself nicelyan overall creative yarn of greed, family and survival. (Graphic fiction. 9-12) Copyright Kirkus Reviews, used with permission.
More book reviews at iDreamBooks.com