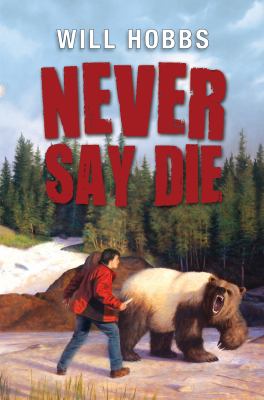 | Aklavik (N.W.T.) -- Juvenile fiction | Canada -- Juvenile fictionDDC classification: [Fic] Summary: Fifteen-year-old half-Inuit Nick and his white brother, Ryan, meet and share an adventure on the Firth River in the Canadian Arctic, facing white water, wild animals, and fierce weather as Ryan documents the effects of climate change on caribou for National Geographic magazine.Other editions: Reproduction of (manifestation):: Hobbs, Will. Never say die.
Tags from this library: No tags from this library for this title. Log in to add tags.

In this fast-paced adventure story set in the Canadian arctic, fifteen-year-old Inuit hunter Nick Thrasher comes face-to-face with a fearsome creature on a routine caribou hunt gone wrong. Part grizzly, part polar bear, this environmental mutant has been pegged the "grolar bear" by wildlife experts. Nick may have escaped this time, but it won't be his last encounter.

Then Nick's estranged half-brother, Ryan, offers to take him on a rafting trip down a remote part of the Firth River. But when disaster strikes, the two narrowly evade death. They're left stranded without supplies--and then the grolar bear appears. Will Hobbs brings his singular style to this suspenseful story about two brothers fighting for survival against the unpredictable--and sometimes deadly--whims of nature.

Fifteen-year-old half-Inuit Nick and his white brother, Ryan, meet and share an adventure on the Firth River in the Canadian Arctic, facing white water, wild animals, and fierce weather as Ryan documents the effects of climate change on caribou for National Geographic magazine.

Gr 5-8-When boys are looking for a good read they turn to authors like Will Hobbs who consistently provides a story that interweaves survival skills, the great outdoors, and spine-tingling adventure. Nick, a 15-year-old Inuit boy living in Alaska, learned from his grandfather how to hunt to feed his family. Like any Inuit hunter, he believes in respecting the animal and taking only what is needed. The book opens with an ordinary hunt where Nick fells a caribou and cuts it up to take home. As he nears his boat, a huge bear appears out of nowhere and viciously attacks him for the food in his pack. This monstrous bear appears to be part grizzly and part polar bear (a "grolar" bear), a possible crossbreeding of the two species. When he returns to his village, Nick receives a letter from his half brother, a professional wildlife photographer, asking him to come along with him into the wild to document the Alaskan wildlife and how global warming has affected their survival. Initially reluctant to leave his sick grandfather behind, Nick realizes that this will be a trip of a lifetime. But all bets are off when a chance meeting with the "grolar" bear changes everything. Hobbs's story (HarperCollins, 2013) addresses the importance of family, global warming, and the place the natural world plays in our lives. This audio is guaranteed to keep listeners on the edge of their seats. Nick Cordero's narration is spot-on, sounding like a teenager with a good story to tell. Don't save this just for the boys-girls will like it too.-Joan Kindig, James Madison University, Harrisonburg, VA (c) Copyright 2013. Library Journals LLC, a wholly owned subsidiary of Media Source, Inc. No redistribution permitted.

Climate change serves as both theme and frequent discussion topic in this purpose-driven survival tale. Nick, half Inuit, reluctantly agrees to accompany his older brother, Ryan, on an expedition into the Yukon's remote Firth River territory to photograph one of the last caribou herds of any real size. Disaster strikes immediately when their raft is overturned by an ice jam and compounds as the two head downstream in search of their supplies, only to discover they are in prime grizzly country. The trek not only gives them plenty of time to exchange views on climate-related issues but also to experience a violent lightning storm (once rare above the Arctic Circle) and an uncommonly wild gale while also being repeatedly attacked by grizzlies and a huge, aggressive grolar bear (a newly emerging hybrid) who has already killed other area visitors. Though plainly intent on delivering the message the climate has become a beast, and we are poking it with sticks, Hobbs balances info dumps with evocative natural observations and a plot lit up with extremes of privation and deadly danger.--Peters, John Copyright 2010 Booklist

Set in the Yukon Territory hard by the Beaufort Sea, Hobbs's latest turbocharged wilderness survival story has heavy weather, savage river waters, treacherous trails, and, as chief antagonist, a "grolar bear." Just as exciting (and real) as the Turkish war dog of Hobbs's Go Big or Go Home (rev. 5/08), the polar bear-grizzly hybrid attacks our hero Nick in the first chapter and returns in the last for a spectacular confrontation. In between, Nick and his adult half-brother Ryan travel by bush plane, raft (until it smashes into a wall of ice), and foot through isolated Ivvavik National Park, where photojournalist Ryan is on assignment to document how caribou numbers and migration have been affected by climate change, which has also led to dangerous (and exciting) thunderstorms, floods, and the grolar bear itself, the result of newly overlapping habitats. While you might want half-Inuit Nick, who never met his now-dead white explorer father, and Ryan, product of yet another of the father's brief relationships, to display some complexity to match their challenging environment, they are mostly there as the reader's stand-ins, allowing him (or her!) to know what it's like to face the bear. And the lightning. And the mosquitoes. Hobbs doesn't resist information-packing ("Nick, have you ever heard the theory that climate change might be a factor in the decline of caribou herds in the Arctic?"), but he's brisk about it and knows how to get out of the...LOOK OUT! roger sutton (c) Copyright 2013. The Horn Book, Inc., a wholly owned subsidiary of Media Source, Inc. No redistribution permitted.

Half-Inuit Alaskan Nick, 15, finds adventure with his older, white half brother Ryan on a National Geographic photographic expedition in Yukon Territory. Nick's discovery of a grizzly/polar bear hybrid at the very outset of the book sets the stage for a nonstop survival adventure. Extremely aggressive and predatory, the 900-pound bear becomes a symbol of the frightening consequences that occur in the wild due to human meddling in the environment. On the expedition, one possible disaster after another occurs, and Nick and Ryan have to cope with them all, relying on knowledge of the terrain and the best survival techniques of both cultural heritages. Narrator Nick's voice is consistent, befitting his upbringing in the small town of Aklavik. The geography of the area and climate are well-delineated, becoming an integral part of the story. The final confrontation is a bit far-fetched, but readers who have stuck with the story that far will likely not care. "Man vs. nature" is a recognizable subgenre of adventure stories, but Hobbs skillfully inserts an eco-conscious twist, asking readers and characters to recognize that in this case, "nature" is man-made. Solid adventure fare. (Adventure. 11-16)]] Copyright Kirkus Reviews, used with permission.
More book reviews at iDreamBooks.com