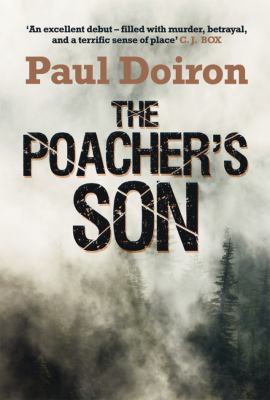 Genre/Form: Thrillers (Fiction) | Detective and mystery stories. | Large type books. | Detective and mystery fiction.DDC classification: 823.92 Awards: Barry Award, the Strand Award for Best First Novel.Summary: "Game warden Mike Bowditch returns home one evening to find an alarming voice from the past on his answering machine: his father, Jack, a hard-drinking womanizer who makes his living from poaching illegal game. An even more frightening call comes the next morning from the police: they are searching for a cop-killer - and Mike's father is their prime suspect. Now, shunned by colleagues who have no sympathy for the suspected killer, Mike must come to terms with his haunted past. He knows first-hand of his father's brutality, but is he capable of murder? Desperate and alone, the only way for Mike to save his father is to find the real culprit..." --Publisher description.
Tags from this library: No tags from this library for this title. Log in to add tags.
Fiction notes: Click to open in new window

Game warden Mike Bowditch gets a frightening call from the police to tell him they are searching for his father, Jack, in connection with the murder of a local cop. Jack has escaped from police custody, and only Mike believes that his hard drinking womanizing father might not be guilty.

"Game warden Mike Bowditch returns home one evening to find an alarming voice from the past on his answering machine: his father, Jack, a hard-drinking womanizer who makes his living from poaching illegal game. An even more frightening call comes the next morning from the police: they are searching for a cop-killer - and Mike's father is their prime suspect. Now, shunned by colleagues who have no sympathy for the suspected killer, Mike must come to terms with his haunted past. He knows first-hand of his father's brutality, but is he capable of murder? Desperate and alone, the only way for Mike to save his father is to find the real culprit..." --Publisher description.

Mike Bowditch, 24, is a rookie game warden for the state of Maine. He's also the son of Jack Bowditch, legendary woodsman, brawler, womanizer, and poacher whom Mike has not seen in over two years. One hot summer night while Mike is out answering a call about a bear stealing a pig, Jack leaves Mike a cryptic message on his answering machine. The next morning, Mike learns that his father is wanted in the murders of a paper company representative and a sheriff's deputy. Through a long few days, Mike jeopardizes his dream job to help the father whose attention he could never get. Verdict A richly imagined portrait of the vanishing wilderness in New England's farthest reaches, Doiron's (editor in chief, Down East: The Magazine of Maine) well-written debut is also a taut thriller and a thoughtful examination of the complicated relationship between father and son. Of a piece with Castle Freeman Jr.'s All That I Have about a Vermont sheriff, this will also appeal to fans of C.J. Box's Wyoming game warden Joe Pickett. [A Minotaur First Editiion Selection; 100,000-copy first printing; library marketing.]-Nancy Fontaine, Dartmouth Coll., Hanover, NH (c) Copyright 2010. Library Journals LLC, a wholly owned subsidiary of Media Source, Inc. No redistribution permitted.

Down East editor-in-chief Doiron takes a provocative look at the ties between fathers and sons, unconditional love, and Maine's changing landscape in his outstanding debut. Game warden Mike Bowditch, who hasn't heard from his dad, Jack Bowditch, in two years, wonders what the man wants from him after he comes home late one night and finds Jack has left a cryptic message on his answering machine. Mike later learns Jack is the prime suspect in the shooting murders of a cop and a timber company executive. Jack, a brutal alcoholic, makes his living poaching game, but Mike can't believe Jack is a cold-blooded killer. Mike's belief in his father puts his job at risk, alienates him from the police, and drives him further away from the woman he loves. Fans of C.J. Box and Nevada Barr will appreciate the vivid wilderness scenes. Equally a story of relationships and an outdoor adventure, this evocative thriller is sure to put Doiron on several 2010 must-read lists. 100,000 first printing; author tour. (Apr.) (c) Copyright PWxyz, LLC. All rights reserved

*Starred Review* Doiron's debut crime novel is set on the coast and in the North Woods of Maine, the home of rookie game warden Mike Bowditch. As tensions rise across the state with the impending sale of huge tracts of paper-company forest land to an out-of-state developer, Mike receives a strange message from his father, left on the same night the paper company rep and a state trooper are shot and killed after a heated town meeting. Doirin, editor-in-chief of Down State magazine, is well acquainted with the current political and cultural tensions that crisscross Maine, and his local knowledge drives this fast-paced and twisty narrative. With realistically flawed characters and a strong sense of place both on the coast and in the woods the novel avoids tourist stereotyping, of Maine itself and its citizens. As a game warden, Mike is devoted to upholding the law, and as a conflict appears to develop between that responsibility and his love for his estranged father, he finds himself with both his job and life on the line. One hopes this fine novel is the first in a series starring Warden Bowditch, who could quickly become the East Coast version of C. J. Box's game-warden hero Joe Pickett, who patrols the range in Wyoming.--Moyer, Jessica Copyright 2010 Booklist

A Maine Game Warden fights to clear his no-account father of murder charges in this deeply felt actioner. Even before his parents divorced, Mike Bowditch wasn't close to his father, and after the breakup, when Jack Bowditch descended into a swamp of womanizing and drinking, Mike had less and less to do with him. Since the last time he saw his father two years ago, he's become a Game Wardena slap in the face to both his poacher father and his girlfriend, Sarah Harris, who left Mike when she realized he was never going to go to law school. Now Jack's back in Mike's life with a vengeance. Someone has shot Jonathan Shipman, the spokesman for the deeply unpopular corporate purchaser of a 100-year-old campground that's obviously planning to shove the current residents aside in the name of development, and Bill Brodeur, the deputy who was guarding him. Det. Wayne Soctomah is convinced that Jack was the shooter. So is almost everyone else in Somerset County except for Mike and his mother, Marie Turner. Scorning Marie and her second husband, attorney Neil Turner, who go into hiding to avoid Jack, Mike vows to do whatever he can to vindicate the father who's been phoning him for help. His decision leads to a series of disastrously self-destructive actions that Doiron makes perfectly credible, all interspersed with a series of flashbacks to Mike's childhood that are both tender and chilling. C.J. Box goes East. Like Box, Doiron will have his hands full trying to top his accomplished debut. Copyright Kirkus Reviews, used with permission.
More book reviews at iDreamBooks.com