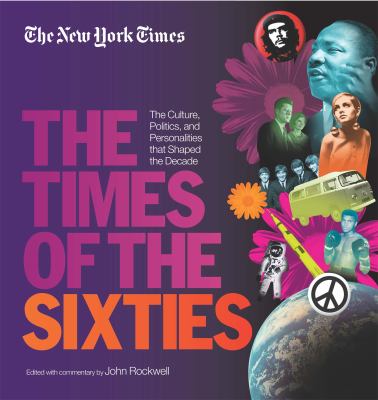 The times of the sixties : the culture, politics, and personalities that shaped the decade / edited with commentary by John Rockwell.

DDC classification: 909.826 Summary: This book captures the history, culture, and personalities of the decade through hundreds of articles and original commentary.
Tags from this library: No tags from this library for this title. Log in to add tags.

There is no better record of events than The New York Times, and The Times of the Sixties captures the history, culture, and personalities of the 1960s through 400 articles and original commentary with contemporary photos throughout.

The Times of the Sixties represents one of the most fascinating, extensive, and well-rounded portraits of one of a tumultuous decades. More than 400 articles culled from the archives of The New York Times and curated by staff writer John Rockwell are gathered here, complete with compelling photographs from staff photographers and more.

The Cuban missile crisis Martin Luther King's I Have A Dream speech and key moments in civil rights The assassinations of President John F. Kennedy and Senator Robert Kennedy The Moon landing The Women's movement Popular music highlights like the Beatles' British Invasion and groundbreaking artists like The Supremes Movie and celebrity coverage like reviews of Psycho , 2001: A Space Odyssey , and The Graduate , and Plus articles on pivotal figures like Mao, Che Guevara, Muhammad Ali, Marilyn Monroe, and Betty Friedan And so much more.

At head of title: The New York Times.

This book captures the history, culture, and personalities of the decade through hundreds of articles and original commentary.

The New York Times continues its look back on the late 20th century in this third book in the series (preceded by The Times of the Eighties and Seventies), which contains -articles, editorials, reviews, and other material originally published in the pages of the era's newspaper of record. The articles are organized similarly to the daily newspaper, with sections for national, international, and New York news; business; science; life and style; sports; and arts and entertainment. Within each section, the articles are arranged chronologically, with certain historical themes emphasized, such as civil rights, the Vietnam conflict, and the space race. Organizing the material this way means that readers can experience the news as it unfolded in history. With only a brief introduction from editor Rockwell, the book is rather light on analysis-a wise choice, as it gives the reader the opportunity to appreciate the writing in its own context. VERDICT History and journalism buffs will enjoy thumbing through this well--assembled and edited collection.-Brett Rohlwing, Milwaukee P.L. (c) Copyright 2014. Library Journals LLC, a wholly owned subsidiary of Media Source, Inc. No redistribution permitted.
More book reviews at iDreamBooks.com