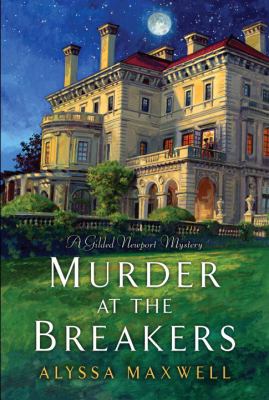 Murder at the Breakers / Alyssa Maxwell.

DDC classification: [Fic] Summary: "As the nineteenth century comes to a close, the illustrious Vanderbilt family dominates Newport, Rhode Island, high society. But when murder darkens a glittering affair at the Vanderbilt summer home, reporter Emma Cross learns that sometimes the actions of the cream of society can curdle one's blood..."--P. [4] of cover.
Tags from this library: No tags from this library for this title. Log in to add tags.
Fiction notes: Click to open in new window
Total holds: 0

As the nineteenth century comes to a close, the illustrious Vanderbilt family dominates Newport, Rhode Island, high society. But when murder darkens a glittering affair at the Vanderbilt summer home, reporter Emma Cross learns that sometimes the actions of the cream of society can curdle one's blood. . .<br> <br> Newport, Rhode Island, August 1895: She may be a less well-heeled relation, but as second cousin to millionaire patriarch Cornelius Vanderbilt, twenty-one-year-old Emma Cross is on the guest list for a grand ball at the Breakers, the Vanderbilts' summer home. She also has a job to do--report on the event for the society page of the Newport Observer.<br> <br> But Emma observes much more than glitz and gaiety when she witnesses a murder. The victim is Cornelius Vanderbilt's financial secretary, who plunges off a balcony faster than falling stock prices. Emma's black sheep brother Brady is found in Cornelius's bedroom passed out next to a bottle of bourbon and stolen plans for a new railroad line. Brady has barely come to before the police have arrested him for the murder. But Emma is sure someone is trying to railroad her brother and resolves to find the real killer at any cost. . .

"As the nineteenth century comes to a close, the illustrious Vanderbilt family dominates Newport, Rhode Island, high society. But when murder darkens a glittering affair at the Vanderbilt summer home, reporter Emma Cross learns that sometimes the actions of the cream of society can curdle one's blood..."--P. [4] of cover.

Miss Emmaline Cross may not have access to the Vanderbilt riches as a member of her father's lowly branch of the family tree; instead she is the beneficiary of a loving home and a feisty demeanor inherited from her mother's side. Invited to a grand ball in August 1895 at the Breakers, the -Vanderbilts' Newport mansion, Emma attends as family as well as a writer for the small local paper's society page. But it's not the gala's social scene that turns out to be newsworthy, Emma witnesses a man fall to his death, and her older brother is the prime suspect. What can a determined lady do but investigate? A variety of likable characters create a strong sense of community, adding to the uneasy feeling Emma develops when familiar faces must be reevaluated as potential murderers. VERDICT Maxwell's portrait of Gilded Age mores, with a little leeway for romantic attachments, provides an opportunity for readers to consider how wealth and status can be as restrictive as it is empowering. This is a promising start to an engaging mystery series filled with smart observations.-Stacey Hayman, Rocky River P.L., OH (c) Copyright 2014. Library Journals LLC, a wholly owned subsidiary of Media Source, Inc. No redistribution permitted.

Set in Newport, R.I., in 1895, Maxwell's pleasant series debut introduces 21-year-old Emmaline Cross, a poor member of the wealthy Vanderbilt clan. She earns her own living, drives her own carriage, and helps rescue her half-brother, "Brady" Gale, from many minor brushes with the law. At the housewarming of Cornelius Vanderbilt's newly completed home, the Breakers, Vanderbilt's financial secretary, Alvin Goddard, is viciously murdered. The police arrest Brady, who's found dead drunk at the scene with railroad plans he has stolen from Vanderbilt in his hands. Coming to his defense once again, Emma discovers that an old friend's troubled marriage, the secret assignations of Vanderbilt's son, and a charismatic stranger who is not what he seems may all be linked to the crime. Maxwell's language and situations can be anachronistic, but Emma's ebullience and the glittering details of Newport's gilded age past give the novel a brisk energy. Agent: Evan Marshall, Evan Marshall Agency. (Apr.) (c) Copyright PWxyz, LLC. All rights reserved.

To save her brother, a gutsy reporter tracks a killer hidden among Newport's rich and famous. Brady Gale is trouble on a stick. So far, his jail time has been confined to overnight stays, under the benevolent eye of Officer Jesse Whyte, as he's slept off whatever hooch he favored. This time, though, it looks as if his sojourn in the slammer may be a little longersay, for the rest of his life. Brady is accused of bashing Alvin Goddard, his uncle's secretary, over the head with a candelabra and pitching him off the second-story balcony of The Breakers, the Vanderbilts' palatial Newport, R.I., home. And just because Cornelius Vanderbilt is Brady's uncle is no reason for authorities to cut the youth any slack. So his half sister, Emmaline Cross, comes to his rescue. Independent Emma is used to taking the reins, in some cases quite literally. She drives her own trap, much to the consternation of her Vanderbilt kin. Poor relation Emma even earns a steady if meager income reporting on social events for the Newport Observer. So it's natural for her to come to Brady's aid, asking pointed questions of her aunt Alice, her cousin Niely, her old schoolmate Adelaide Halstock, family friend Jack Parsons and anyone else who might have seen something significant during the ball on the night of Goddard's demise. She even agrees to team up with fellow reporter Derrick Anderson, a handsome fellow who makes Emma's heart beat faster. And a strong heart is just what Emma will need to exonerate her brother and foil whoever's dogging her heels in an effort to thwart her. Emma Cross' debut will delight fans of the mystery-as-romance formula; others may want to steer clear.]] Copyright Kirkus Reviews, used with permission.
More book reviews at iDreamBooks.com