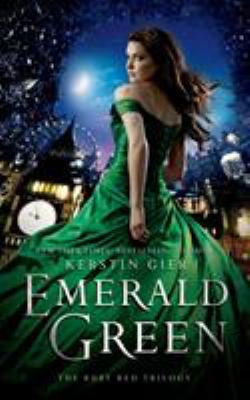 | Great Britain -- History -- FictionSummary: "Since learning she is the Ruby, the final member of the time-traveling Circle of Twelve, nothing has gone right for Gwen and she holds suspicions about both Count Saint-Germain and Gideon, but as she uncovers the Circle's secrets she finally learns her own destiny" --Publisher description.
Tags from this library: No tags from this library for this title. Log in to add tags.
Fiction notes: Click to open in new window
Total holds: 0

Gwen has a destiny to fulfill, but no one will tell her what it is. She's only recently learned that she is the Ruby, the final member of the time-traveling Circle of Twelve, and since then nothing has been going right. She suspects the founder of the Circle, Count Saint-Germain, is up to something nefarious, but nobody will believe her. And she's just learned that her charming time-traveling partner, Gideon, has probably been using her all along. This stunning conclusion picks up where Sapphire Blue left off, reaching new heights of intrigue and romance as Gwen finally uncovers the secrets of the time-traveling society and learns her fate.

Includes GoFish questions for the author, and excerpts from Dream a little dream.

"Since learning she is the Ruby, the final member of the time-traveling Circle of Twelve, nothing has gone right for Gwen and she holds suspicions about both Count Saint-Germain and Gideon, but as she uncovers the Circle's secrets she finally learns her own destiny" --Publisher description.

Gr 7-10-This installment picks up where Sapphire Blue (Holt, 2012) left off. Sixteen-year-old Gwyneth Shepherd is nursing a broken heart after believing that Gideon de Villiers, her handsome time-traveling companion, has been manipulating her feelings for his own gain. To complicate matters, the Guardians who oversee her travel insist that she attend an 18th-century ball to meet with the Circle of Twelve's untrustworthy founder, Count Saint-Germain. The Count is depending on Gwyneth and Gideon to collect blood samples from the remaining Circle members to be entered into the chronograph (the time-traveling device). But what happens when the Circle is closed? Gwyneth is determined to unmask the Count's sinister plot while trying to hide her rogue time traveling from the Guardians, who might have a traitor in their midst. With the help of her grandpa, Gwyneth uncovers a hidden chronograph, secrets about her birth, and a shocking revelation about her own mortality while attending high-school parties and saving an endearing ghost from his smallpox fate. This would be quite overwhelming for any London teen, but Gwyneth handles her struggles with pluck, ingenuity, and good humor. There's so much to like in this trilogy: dry wit, enchanting first love, snarky gargoyles, a treacherous villain, mind-bending time travel, and quirky family members, who make it all worthwhile. This thrilling, yet bittersweet conclusion will leave readers feeling satisfied with the romance, but sad that the story is over.-Kimberly Garnick Giarratano, Rockaway Township Public Library, NJ (c) Copyright 2013. Library Journals LLC, a wholly owned subsidiary of Media Source, Inc. No redistribution permitted.

The conclusion to the Ruby Red series has as many twists as the two previous books in the trilogy. Gwen has endured danger and flirted with romance throughout the two weeks (!) since she learned she's the final member of the time-traveling Circle of Twelve. Now, the questions aren't resolved until the final few pages as she tries to counteract the plans of the dastardly Count Saint-Germain. The best-selling series has been blessed with a clever heroine, a hysterical gargoyle, and a guy as good looking as he is enigmatic. With loooong lives ahead of them, perhaps this not the end after all.--Cooper, Ilene Copyright 2010 Booklist

The trilogy's final book (Ruby Red; Sapphire Blue) reveals that founder Count Saint-Germain has been manipulating the time-traveling Circle of Twelve. Sixteen-year-old Gwen must be persuaded to work with handsome Gideon again after he betrayed her, and motives are blurred as it becomes clear the Circle has been corrupted. An entertaining ride with a well-built conceit and reliable characterization. (c) Copyright 2014. The Horn Book, Inc., a wholly owned subsidiary of Media Source, Inc. No redistribution permitted.

Contemporary teen Gwen confronts romantic heartbreak and shocking secrets about her destiny as part of the time traveling Circle of Twelve in this final volume of the Ruby Red Trilogy, which commences where Sapphire Blue (2012) abruptly ended. Since discovering she's the Ruby, the last link in the multigenerational Circle, which is controlled by malevolent Count Saint-Germain, Gwen and fellow time traveler Gideon have undertaken perilous trips to the past. They've connected with missing Circle members whose blood samples must be added to a chronograph for the Circle to be complete and a secret prophecy fulfilled. Desperately in love with Gideon, a heartsick Gwen believes he feigned love to manipulate her, but during one of their missions, Gwen receives what should be a mortal wound, and Gideon reveals his true feelings. Together, they learn the count plans to sacrifice Gwen to ensure his own immortality, and Gwen discovers game-changing secrets about her past as she prepares for a final showdown. The vulnerable Gwen continues to narrate in chatty, somewhat self-absorbed banter that's liberally laced with humor. Gradual unveiling of secrets, blossoming love and suspenseful forays into the past rivet attention. Ruby Red series fans will not be disappointed with this surprising and romantic finale. (Fantasy. 12 up)]] Copyright Kirkus Reviews, used with permission.
More book reviews at iDreamBooks.com