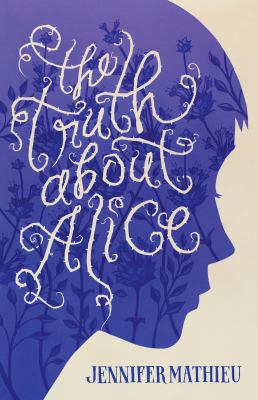 The truth about Alice / Jennifer Mathieu.

There are a lot of rumours about Alice Franklin, and it's stopped mattering whether they're true. It all started at a party when Alice supposedly was with two guys in one night. But when one of those guys died in a car crash, the rumours exploded into serious allegations that his death was Alice's fault. Now the one friend Alice has in her suffocating small town may be the only other person who knows the truth - but he's too afraid to admit it.

It all started at a party when Alice supposedly was with two guys in one night. But when one of those guys died in a car crash, the rumours exploded into serious allegations that his death was Alice's fault. Now the one friend Alice has in her suffocating small town may be the only other person who knows the truth but he's too afraid to admit it.

It all started at a party when Alice supposedly was with two guys in one night. But when one of those guys died in a car crash, the rumours exploded into serious allegations that his death was Alice's fault. Now the one friend Alice has in her suffocating small town may be the only other person who knows the truth - but he's too afraid to admit it.

Four high-school juniors-Elaine, Kelsie, Josh, and Kurt-narrate the eponymous Alice's story in turns. A callous jock named Brandon starts a rumor that Alice slept with him and another boy at Elaine's party. Shortly afterward, he dies in a car crash, and Josh suggests that texts from Alice distracted Brandon. These rumors take on a life of their own, transforming Alice from a well-liked girl into a cafeteria pariah with a "Slut Stall" dedicated to her in the girls' bathroom. Mathieu's well-crafted debut portrays all the teens sympathetically, revealing the insecurities that motivate their actions; for example, Kelsie thinks the popular girls "could smell my old middle school nerdiness on me like it was some kind of disease," and would rather betray her best friend than lose her newfound popularity. Their accounts unintentionally reveal Alice's decency, emphasizing the cruelty of the ostracism and underscoring the integrity of the one boy who dares to befriend her. Alice gets the final word, yet Mathieu avoids reducing her story to a revenge narrative, instead offering a quietly powerful testament to perspective and personal resilience. Ages 12-up. Agent: Sarah LaPolla, Bradford Literary Agency. (June) © Copyright PWxyz, LLC. All rights reserved.

Gr 7 Up-Everyone at Healy High and the surrounding town have heard the rumors about Alice Franklin. Not only did Alice sleep with two guys in the same night, she also caused one of those guys, Brandon Fitzsimmons, to die in a car accident. As Alice is shunned by even her closest friends and reports of an abortion surface, only Kurt, an outcast himself, reaches out to Alice in friendship. In alternating chapters told by high school students Elaine, Kelsie, Josh, and Kurt, listeners learn the true and not-so-true details of the events that have forever changed Alice's life. While rumors and slut-shaming are central to the plot, themes of friendship and sexuality are also explored. Mathieu does not shy away from depicting the lives and hidden motives of the characters in all their gritty, complicated detail. Narrators Ali Ahn, Michael Bakkensen, Graham Halstead and Elizabeth Morton convincingly portray the Healy High students, and Saskia Maarleveld finishes the story with a look into Alice's point of view. VERDICT Fans of character-driven, realistic fiction will want to try this audiobook.-Amanda Spino, Ocean County Library, NJ © Copyright 2015. Library Journals LLC, a wholly owned subsidiary of Media Source, Inc. No redistribution permitted.

The text that changed everything: tommy and me banged alice franklin upstairs. Nearly overnight, Alice's status as a popular junior is destroyed, as students, parents, and seemingly everyone else in Healy, Texas (population 3,000), gasp about the scandal. Debut novelist Mathieu assigns storytelling duties to the side characters: queen bee Elaine, who has an old grudge to exploit; bestie Kelsie, who uses Alice's misfortune as a way to climb the social ladder; Josh, best bud of Brandon, the star quarterback who sent the text; and Kurt, the brainy weirdo who offers Alice her only solace. When Brandon dies in a road accident supposedly brought on by Alice's distracting texts, the ostracism kicks into overdrive. If the plot and cast of characters feel familiar, well, they are, but Mathieu's telling is done with plenty of caustic panache, with the characters betraying their own failings and insecurities each is a ticking bomb that Alice sets off by chance. Relevant to college readers, too, this is a tough, unapologetic look at slut-shaming from a promising new voice.--Kraus, Daniel Copyright 2014 Booklist

After supposedly having sex with two boys at a party, Alice's bad reputation is perpetuated through text messages, bathroom graffiti, and other forms of rumor-mongering. For most of the novel, we learn about Alice through what others allege about her; salacious details and Alice's eventual romance with a sympathetic boy distract from the serious issues at the heart of the story. (c) Copyright 2014. The Horn Book, Inc., a wholly owned subsidiary of Media Source, Inc. No redistribution permitted.

Jealousy, rumors and lies can ruin a teen girl's life.In the summer before junior year at Healy High School, Alice Franklin was one of the girls popular enough to be invited to Elaine O'Dea's party. That night, Alice supposedly slept with both high school quarterback Brandon Fitzsimmons and college guy Tommy Cray. Just after homecoming, Brandon dies in a car accident, allegedly while texting with Alice. Debut author Mathieu brings new life to a common mean girls' narrative through her multiple first-person narrators. Readers first hear Alice's story from Elaine, the queen bee of the junior class. Then Kelsie Sanders enters as Alice's best friend, who is willing to cast her aside to maintain her own tenuous place in the social hierarchy. Two boys also get to tell their sides of the story: Josh Waverly, Brandon's best friend, who has secrets of his own, and Kurt Morelli, nerd extraordinaire, who's been secretly obsessed with Alice for years. Due to the novel's short length, the rotating narrators and a few questionable word choices, some characters border on caricatures in places. When readers finally hear directly from Alice in the book's last chapter, they may wonder why the author took so long to introduce arguably the most interesting voice in the book.A quick if unoriginal read saved by a realistic ending. (Fiction. 13-18) Copyright Kirkus Reviews, used with permission.
More book reviews at iDreamBooks.com