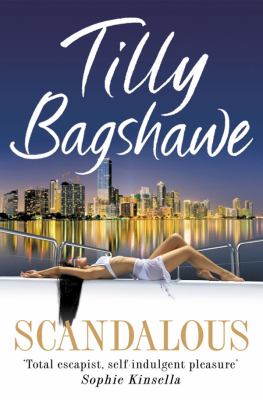 Ultimate glamour, sheer escapism, it has to be Tilly Bagshawe

Prof. Theodore Dexter lusts after naive Sasha Miller, a first-year Cambridge University student and physics phenomenon under his advisement. Once Theo manipulates Sasha into bed, it isn't long before he also manipulates her future, stealing her groundbreaking theory as his own, which launches his career into the stratosphere. From that moment on, Sasha abandons physics in favor of cutthroat business so that she can obtain the fortune, fame, and power required to bring down Theo, who ascended to television stardom on the strength of her work. While Sasha's eventual victory is never in doubt, Bagshawe keeps things interesting with multiple subplots incorporating Theo's miserable wife, Theresa, and Sasha's business adversary, Jackson. Hollywood glamour, Wall Street acumen, and English style dominate the action, and while both Sasha and Theresa get happy endings with nice guys, readers seeking the vulnerability, sexual chemistry, and humor that make romances fun to read will have to look elsewhere. Agents: Alexandra Machinist and Luke Janklow, Janklow & Nesbit. (Apr.) (c) Copyright PWxyz, LLC. All rights reserved.

As a naive yet brilliant Cambridge University student, Sasha Miller fell under the thrall of her magnetic physics master, Professor Theo Dexter, who seduced her and stole her groundbreaking theory. Devastated, Sasha leaves Cambridge and science behind for Harvard Business School, while Dexter trades on the stolen theory to become a famous talk-show host. Years later, Dexter and his long-suffering wife, Theresa, are in Hollywood where Dexter's Universe has earned him, somewhat dubiously, fame, fortune, and plenty of female attention, including that of an up-and-coming starlet. Meanwhile, though Sasha is a top executive at a Manhattan real estate firm, she's still consumed with exposing Theo's fraud while also entangled in a rivalry with the hotshot, womanizing executive who hired her, Jackson Dupree. Bagshawe doesn't stray from her preferred and popular formula: a strong, beautiful woman who needs love to blossom finds the flawed but ultimately reformed Lothario to provide it.--Walker, Aleksandra Copyright 2010 Booklist
More book reviews at iDreamBooks.com