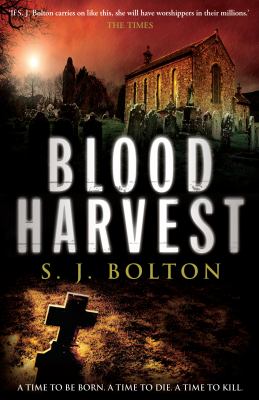 Ten year-old Tom and his family have just moved to a small town perched on the crest of the moors. But troubles begin when Tom sees a mysterious child lurking around the nearby churchyard.Her creepiest yet --Alsion Flood (Observer, Thriller of the Month) What makes Blood Harvest such a satisfyingly atmospheric 400-odd pages, however, is its clever synthesis of two surefire strategies: the slow-burning supernatural mystery in which the dark secret of a town or community is gradually uncovered by a vulnerable protagonist; and the dark psychological crime narrative. --Barry Forshaw (Independent, Wednesday, 21 April 2010)

Bolton's third gothic mystery (after Sacrifice and Awakening) will keep readers awake at night for two reasons: it's too spooky to put down, and they are going to want to know what happens next. When the Fletcher family moves to Heptonclough, a small village on the Lancashire moors, the children are thrilled with their new home and the huge church grounds on the other side of the fence where they can roam at will. But the family finds that the locals are a closed community, and some of their traditions seem a little bizarre. When a series of pranks played on the newcomers become increasingly more dangerous, the oldest son, Tom, starts to display seriously troubling behavior. The local vicar and a family psychiatrist become involved in the family's troubles when a grisly discovery made in the churchyard next door leaves the family and the entire town reeling. VERDICT This suspenseful tale is sure to satisfy readers, even if it leaves them a little sleep deprived. [Prepub Mystery, LJ 2/1/10.]-Lisa O'Hara, Univ. of Manitoba Libs., Winnepeg (c) Copyright 2010. Library Journals LLC, a wholly owned subsidiary of Media Source, Inc. No redistribution permitted.

In Bolton's superb third thriller, the Fletchers-mother Alice, father Gareth, 10-year-old Tom, six-year-old Joe, and two-year-old Millie-receive an icy welcome on moving to isolated Heptonclough, England. When Tom swears he sees a young girl watching him from the shadows, everyone assumes it's his overactive imagination or maybe local kids playing a joke. But when one such prank puts Millie's life in danger, the Rev. Harry Laycock, a vicar who's also new to the area, suspects something more sinister might be at work. Through Dr. Evi Oliver, a psychiatrist, Harry meets a patient of Evi's, Gillian Royle, who's still distraught over the death of her young daughter in a mysterious house fire three years earlier. Harry soon discovers disturbing links between the death of Gillian's daughter and the fates of two other girls. Bolton (Awakening) expertly balances the gothic supernatural elements with a crackling psychological plot, leaving readers breathless until the last page. (June) (c) Copyright PWxyz, LLC. All rights reserved

Harry, the new church vicar in the small English village of Heptonclough, has plenty of experience counseling troubled parishioners. But lately he has found himself dealing with more than malaise. Three little girls have been abducted and killed, and all of their deaths are tied in some way to the church. A recent attempt has been made on the life of little Millie Fletcher, whose family moved to Heptonclough from America with dreams of peaceful days. The Fletchers' home is very near the cemetery, and Millie's brothers, Tom and Joe, tell tales of an eerie woman who haunts the graveyard. Is she the one responsible for the murders, or is she just trying to warn others of Heptonclough's ills? When young Joe Fletcher disappears, Harry, a team of detectives, and a lovely psychiatrist named Evi work together to collar the culprit. Bolton's latest modern gothic thriller (after Awakening, 2009) serves up plenty of chills and some nice romantic chemistry between Harry and Evi. But her ending is rushed and far too far-fetched, even for readers willing to suspend disbelief.--Block, Allison Copyright 2010 Booklist
More book reviews at iDreamBooks.com