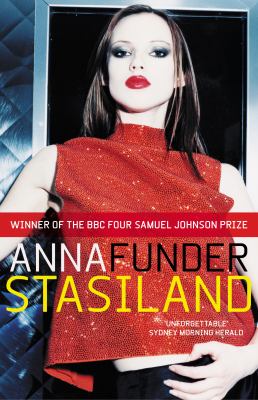 | Germany (East) -- BiographyDDC classification: 943.10870922 | 327.124310922 Awards: "Winner of the BBC Four, Samuel Johnson prize"--Cover.Summary: A book of travel, history and biography that reads like a documentary novel. Anna Funder tells astonishing stories from the underbelly of the former East Germany. As her narrative builds, Stasiland records heartbreaking tales of bravery and betrayal, of suffering and stoicism amid the daily chaos.
Tags from this library: No tags from this library for this title. Log in to add tags.

Truth can be stranger - and more fascinating - than fiction. Anna Funder tells extraordinary stories from the underbelly of the most perfected surveillance state of all time, the former East Germany. Funder meets Miriam, the sixteen-year-old who might have started World War III. She visits the regime's cartographer, obsessed to this day with the Berlin Wall, then gets drunk with the legendary 'Mik Jegger' of the east, once declared by the authorities 'no longer to exist'. And she finds spies and Stasi men, still loyal to the Firm as they wait for the next revolution. Stasiland is a lyrical, at times funny account of the courage some people found to withstand the dictatorship, and the consequences for those who collaborated. Funder explores the daily chaos and harsh beauty of Berlin, a place where some people are trying to remember, and others just as hard to forget. Stasiland is a brilliant debut by a prodigiously gifted writer.

A book of travel, history and biography that reads like a documentary novel. Anna Funder tells astonishing stories from the underbelly of the former East Germany. As her narrative builds, Stasiland records heartbreaking tales of bravery and betrayal, of suffering and stoicism amid the daily chaos.

In this notable debut, Australian author Funder presents a fascinating investigation of an important issue in present-day Berlin, namely, the legacy of East Germany's pervasive secret police, the Stasi, who created the most perfect surveillance state of all time, and of those who had the courage to resist during the Communist regime. Funder, who became captivated by Berlin while working there in the 1990s, gathers stories of those with firsthand experience of the cruel Stasi mind-set during the Cold War. For instance, teenager Miriam Weber was imprisoned for attempting escape over the Berlin Wall, Frau Paul was denied access to her ill infant in West Berlin, and East German rock star Klaus Renft was declared by authorities to no longer exist. If these stories were the only ones Funder recounted, the book would lack balance. But here we also meet Stasi agents and informers, including Hagen Koch, the cartographer of the wall, and Karl-Eduard von Schnitzler, a propagandist for the regime and a particularly odious example of the Stasi attitude. Although this is his first book, Funder writes with skill and style. Highly recommended for both public and academic libraries.-Janet Ross, formerly with Sparks Branch Lib., NV (c) Copyright 2010. Library Journals LLC, a wholly owned subsidiary of Media Source, Inc. No redistribution permitted.

"Its job was to know everything about everyone, using any means it chose. It knew who your visitors were, it knew whom you telephoned, and it knew if your wife slept around." This was the fearsome Stasi, the Ministry for State Security of the late and unlamented German Democratic Republic. Funder, an Australian writer, international lawyer and TV and radio producer, visiting Germany after the fall of the Berlin Wall, finds herself captivated by stories of people who resisted the Stasi-moving stories that she collects in her first book, which was shortlisted for two literary awards in Australia. For instance, Miriam Weber, a slight woman with a "surprisingly big nicotine-stained voice," was placed in solitary confinement at the age of 16 for printing and distributing protest leaflets; she was caught again during a dramatic nighttime attempt to go over the Wall. Filtered through Funder's own keen perspective, these dramatic tales highlight the courage that ordinary people can display in torturous circumstances. (June) (c) Copyright PWxyz, LLC. All rights reserved

During its 40-year history, the German Democratic Republic--East Germany--was, with Soviet assistance, the perfect police state. The organ of surveillance within the GDR (as well as foreign intelligence activities) was the Stasi, which, better than any other modern secret police, had organized a large army of citizen informers. Australian writer Funder thoroughly documents that culture of domestic spying and its effects on a cross-section of East German society. To call the stories that she relates as Orwellian is rather an understatement; the fact that they are true alone goes beyond Orwell: the mysterious death of a husband while in detention, the sudden "nonexistence" of a rock star, a mother's separation from her critically ill infant. What the reader learns from these stories is that evil swings like a pendulum, from the banal to the surreal, but no matter where it is in the spectrum, it always leaves pain behind. --Frank Caso

Sydney-based Funder's impressive debut crisply renders her pursuit of East Berlin's ghosts. When she was writer-in-residence at the Australia Center in Potsdam, the author became fascinated by the uneasy truce former East Germans kept with their recent Communist past, which was literally all around. The German Democratic Republic's surveillance apparatus, run by the Stasi (secret police), was more pervasive than elsewhere in the Eastern Bloc; many people became informers, while others had their lives ruined for minor infractions. Funder befriended several survivors, such as Miriam, who was arrested at 16 in 1968 for anti-authoritarian pranks; fearing prison, she attempted to cross the Berlin Wall, served time, and was persecuted for years. (Eventually her lover died, mysteriously, in custody.) A couple the author met had nearly lost their sick child, who was at a better hospital in West Berlin; her landlady was barely able to acknowledge what turned out to be a history of twisted treatment by the Stasi. Similar trials are recalled with cocky humor by survivors like Klaus Renft, once a naïve underground rock star whose band provided youthful GDR residents with "something authentic and unauthorised." Funder also sought out ex-Stasi workers willing to tell their stories; she had a memorably bizarre encounter with Herr von Schnitzler, a despised pioneer of televised propaganda who defended the regime with undiminished vitriol. Funder shrewdly blends memoir elements with these personal histories and casts an attentive eye on the decrepit landscape with its haunting traces of the old regime, most dramatically expressed by the official effort to untangle the Stasi's paper trail: an office of so-called "puzzle women" working to restore shredded documents in an effort projected to take 375 years. The former GDR may be out of the news these days, but Funder's fully humanized portrait of the Stasi's tentacles reads like a warning of totalitarian futures to come. Colorful, intensely observed, well executed, with lots of black humor and disturbing undertones. Copyright ©Kirkus Reviews, used with permission.
More book reviews at iDreamBooks.com