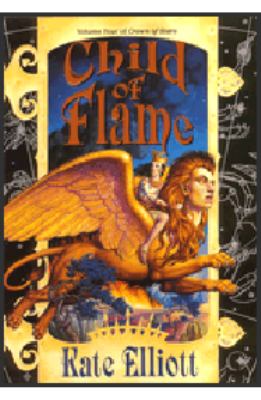 Child of Flame takes us far beyond the borders of the war-torn kingdoms of Wendar and Varre as Alain is drawn into the heart of an ancient conflict between humankind and their dread enemy, the Cursed Ones; Liath faces her most difficult trial in a land of exile; and Sanglant struggles to reach Henry with a warning about the conspiracy of sorcerers who have sworn to put an end to the Aoi -- no matter how much destruction may be unleashed by their workings of magic....

Sequel to: The burning stone.

Followed by: The gathering storm.

Bound together by destiny, four heroes of the war-wracked lands of Wendar and Varre find themselves following different courses of action, as each discovers a unique path in their common fate. Continuing her epic tale of kings and common folk, warriors and priests, Elliott demonstrates her talent for combining magic and intrigue with grand-scale storytelling. Libraries owning previous volumes in the series (King's Dragon, Prince of Dog, The Burning Stone) will want to add this fantasy adventure to their collections. (c) Copyright 2010. Library Journals LLC, a wholly owned subsidiary of Media Source, Inc. No redistribution permitted.

The fourth of what is intended to be a five-volume epic series, this exceedingly stout high fantasy novel stands comparatively independent of the three preceding it. Continuing their deadly rivalry for the throne, King Henry of Wendar and his bastard son, Sanglant, enlist the aid of their siblings as they conjure spells and clash swords. Meanwhile, Sanglant has an heir of his own, the Cursed Ones (beings from one of the several alternate planes that exist in this saga) capture his wife, and his nonhuman mother returns, bearing prophecies of such imminent and dire doom that nobody believes her until disaster is upon them. Newcomers to this series will appreciate the narrative's brisk pacing, as well as Elliott's formidably competent world building (particularly the courts and the village of the Hallowed One) and carefully considered systems of magic and tactics that display more than an average knowledge of military history, religion and folklore. Some readers may find this installment too long and complex, though, and lacking, at critical points, the emotional impact and characterization that Tolkien or more recent fantasists such as Jordan, Hobb and Orson Scott Card bring to works of similar complexity. Although devout Elliott fans and lovers of long, convoluted fantasy tales will find her latest to be more than satisfactory, the novel's lack of precision may limit its appeal. (Oct.) (c) Copyright PWxyz, LLC. All rights reserved
More book reviews at iDreamBooks.com