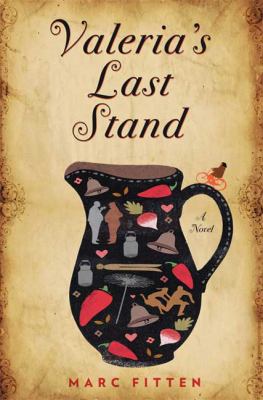 A comic romp celebrating late-flowering love in a Hungarian village that will appeal to readers of The Guernsey Literary and Potato Peel Pie Society and A Short History of Tractors in Ukrainian .

Valeria is a whale in a puddle. She harrumphs her daily way through her backwater Hungarian village, finding equal fault with the new, the old, the foreign, and the familiar. Her decades of universal contempt have turned her into a touchstone of her little community--whatever she scorns the least must be the best, after all. But, on a day like any other, her spinster's heart is struck by an unlikely arrow: The village potter, long known and little noticed, captures her fancy, and Valeria finds herself suddenly cast in a role she never expected to play. This one deviation from character, this one loose thread, is all it takes for the delicately woven fabric of village life to unravel. And, for the first time in a long time, Valeria couldn't care less. With humor and sensitivity, author Marc Fitten delivers an unexpected and entirely inspiring first novel that will leave you begging for more.

In this warmly amusing first novel, true love overtakes a grumpy old woman in Hungary, and her remote village is thrown into an uproar. Feared harridan Valeria falls for the local potter, a hapless widower content to make plates for his local customers. The potter had been seeing the woman who runs the bar where all the local men hang out, and she soon becomes jealous of Valeria and plots to sabotage the budding romance. Initially indecisive, the potter finally realizes that Valeria, for all her contrariness, has inspired him to create artistic masterpieces. Subplots involve the potter's apprentice, who refuses to commit to his own love, and the mayor's efforts to drag the remote village into the modern age. Throughout, the other villagers and bar patrons form a kind of Greek chorus. In the end, true love will conquer all, even though it might be injured a little by a broken beer bottle. Enjoyable and poignant, this work is recommended.-Jim Coan, SUNY Coll. at Oneonta Lib. (c) Copyright 2010. Library Journals LLC, a wholly owned subsidiary of Media Source, Inc. No redistribution permitted.

Life in an isolated Hungarian village is turned upside down by an unusual love affair in Fitten's promising debut. In the small hamlet of Zivatar, 68-year-old Valeria is known by all as a cantankerous woman, quick to criticize everything from the produce at the market to the mayor's lofty ambitions to lure foreign investors to the town. But a chance encounter one day with the elderly local potter-a man Valeria has known for years but never noticed-changes everything. The widower potter falls just as hard for Valeria, despite his relationship with Ibolya, the owner of the village's only tavern. Unaccustomed to being smitten, Valeria tries to maintain her normal routine, but the village is in an uproar over this unlikely love triangle. The arrival of a traveling chimney sweep intent on bilking the townspeople sends another ripple through what was once a placid village. Fitten is not always successful in balancing character development with the larger themes of power and progress, but the irascible Valeria makes such a unique heroine that readers may be willing to overlook the story's less fluid elements. (May) (c) Copyright PWxyz, LLC. All rights reserved

The entire Hungarian village of Zivatar is terrified of Valeria's sharp eyes and acid tongue. Sturdy, tough, and misanthropic at 68, Valeria is the unlikeliest candidate for love, so naturally her unforeseen affairs become the catalyst for tumultuous scandal. After inspiring the handsome potter to become a true artist, Valeria makes a fool of the conniving itinerant chimney sweep and an enemy of the jealous, cleavage-displaying, ever-scheming pub owner, while the bawdy, roughhousing, sly villagers watch and dissect every move, a veritable drunken chorus of the steppes. Not only are these former socialists discombobulated by Valeria's transformation from harridan to heartbreaker and muse, they are also confused by the greedy mayor's embrace of capitalism and slowly reveal themselves to be secret romantics. First-time novelist Fitten, recipient of the Paul Bowles Fellowship for Fiction and editor of the Chattahoochee Review, riffs on classic village comedy with satirical glee. Evoking Gogol, Kundera, and García Márquez,with a touch of Fellini for good measure, Fitten concocts a shrewdly farcical tale of the endless battle between change and tradition.--Seaman, Donna Copyright 2009 Booklist

Sharp-eyed debut novel limns life in a remote Hungarian town, a post-communist hotbed of greed, envy and romantic rivalries. During World War II, Allied and Axis tanks alike bypassed this unnamed village as not worth bothering with, but in 2000 its aggressive young mayor keeps inviting foreign investors to visit and finance local industry. (Results so far: one Dutch dog-food company.) Ridiculous, thinks Fitten's cranky, majestic heroine Valeria, who at 68 has seen it all and has little faith in any of it. Her main pleasure is visiting the village market, bypassing the "Chinese boom boxes, Polish electronics, German cassettes," to reproach her neighbors for selling subpar fruits and vegetables. Everyone's terrified of this tough old woman, who denounced her first lover to the Soviets way back in the '40s, but the astonished crowd sees a whole new side of Valeria when the widowed potter catches her eye. With the villagers commenting on the action like a voluble, mean-spirited Slavic Greek chorus, Valeria orders a magnificent pitcher from the potter, and they have a one-night stand that provokes the enmity of his girlfriend Ibolya, proprietress of the local tavern. A little old (58) for flashing her bosom and legs to attract customers, Ibolya figured she'd eventually settle down with the potter. Now the vengeful tavern owner incites a visiting chimney sweep to make trouble all around. Ten days in bed with the chimney sweep certainly cheer up Valeria, but when the potter comes back with a pair of vases, she understands that she's his muse, and their shared love of beautiful things unites them. A final jealous outburst from the chimney sweep and more troublemaking by Ibolya can't alter the inevitable outcome of a clever if slightly overdetermined narrative that emulates the fablelike tone of Calvino and Mrquez, adding a heaping helping of Kundera-like sex and satire. Intellectually if not emotionally engaging, and it's refreshing to see a neophyte author taking seriously the passions and opinions of older people. Fitten has a distinctive voice and a promising future. Copyright Kirkus Reviews, used with permission.
More book reviews at iDreamBooks.com