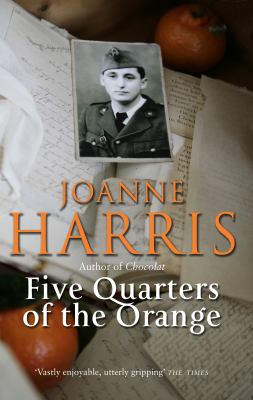 | Loire River Valley (France) -- FictionGenre/Form: Psychological fiction. | Domestic fiction.DDC classification: 823.914 Summary: Set in occupied France, this is the story of a successful woman whose carefully constructed and hidden past threatens to be exposed by her profiteering nephew.
Tags from this library: No tags from this library for this title. Log in to add tags.
Fiction notes: Click to open in new window

A GRIPPING PAGE-TURNER SET IN OCCUPIED FRANCE, FROM THE BESTSELLING AUTHOR OF CHOCOLAT AND THE STRAWBERRY THIEF

Beyond the main street of Les Laveuses runs the Loire, smooth and brown as a sunning snake - but hiding a deadly undertow beneath its moving surface. This is where Framboise, a secretive widow, plies her culinary trade at the craperie - and lets her memory play strange games.

As her nephew attempts to exploit the growing success of the country recipes Framboise has inherited from her mother, a woman remembered with contempt by the villagers, memories of a disturbed childhood during the German Occupation flood back, and expose a past full of betrayal, blackmail and lies.

'Just as she did in Chocolat , Harris indulges her love of rich and mouth-watering descriptive passages, appealing to the senses with seductively foreign names, and evoking the textures and smells of food. These descriptions are suffused with a child's wide-eyed wonder that lends the story a magical quality, almost like a folk tale... Thoroughly enjoyable' GUARDIAN

Set in occupied France, this is the story of a successful woman whose carefully constructed and hidden past threatens to be exposed by her profiteering nephew.

Tragedy, revenge, suspicion, and love are the ingredients for the latest offering from the author of the acclaimed Chocolat. Framboise Dartigen recounts what happened in her tiny village of Les Laveuses during the German occupation and why after carrying the secret for more than 55 years she hid her identity upon returning. Beset by wartime privations, the people of Les Laveuses were a mixture of resistance fighters, collaborators, and financial opportunists. When a German soldier died mysteriously, townspeople were executed, and Framboise's mother was tortured and driven out by her neighbors, who believed that she had collaborated. Only her children knew the truth, and now Framboise, the sole survivor, has come back to claim the family farm and run a little crperie featuring her mother's recipes. In the album she inherited from her mother are not only her recipes and mementos but also clues to what really happened so long ago. Like the oranges whose fragrance so tortured Framboise's mother, the ending is bittersweet, and readers will love it. Highly recommended. [Previewed in Prepub Alert, LJ 1/01.] Susan Clifford Braun, Aerospace Corp., El Segundo, CA (c) Copyright 2010. Library Journals LLC, a wholly owned subsidiary of Media Source, Inc. No redistribution permitted.

If Harris's previous novel, Chocolat, was an adorably sweet morsel of French village lore, then this, her third, is a richer, more complex dessert wine. Still using her arsenal of culinary metaphors, quirky characters and slightly surreal incidents, Harris presents a complicated but beautiful tale involving misfortune, mystery and intense family relations. Framboise Dartigen, a feisty yet sensitive girl, grew up in a gossip-ridden hamlet on the banks of the Loire called Les Laveuses. Striving for attention and power, nine-year-old Framboise (or Boise, to her family) took to playing nasty tricks on her headstrong, mentally vulnerable mother, Mirabelle, who had a weakness for oranges. And it was not the usual affliction Mirabelle actually experienced "spells" (akin to epileptic fits) if she even smelled the fruit. But despite Framboise's girlish pranks, Mirabelle's maternal instinct was strong. When her children befriended German soldiers who were in the village during the World War II occupation, things went awry, and mother and children were forced to flee. As Framboise tells the tale, she's in her 60s and has returned to Les Laveuses, posing as a widow named Franoise Simon. When the caf she owns is reviewed in a national food magazine, her cover is blown and the past resurfaces. Harris has constructed a multilayered plot, punctuated with scrumptious descriptions of French delicacies and telling depictions of the war's jolting effects on one fragile family. This intense work brims with sensuality and sensitivity. (May) Forecast: Given Chocolat's brilliant success in print and on screen, this book will have no trouble attracting attention. Whether the previous book's readers are ready for this more serious novel is questionable, however. Harris, who lives in England, will make appearances in six U.S. cities in early June. (c) Copyright PWxyz, LLC. All rights reserved

Adult/High School-Framboise Dartigen relates this story from her point of view as a nine-year-old and as a woman in her 60s. She spent her childhood in a Nazi-occupied French village with her widowed mother and siblings. Knowing that the scent of oranges brought on her mother's severe migraines, Framboise was clever enough or devious enough to hoard orange peel for her own advantage. During their unsupervised play, the children met a young Nazi soldier and were captivated by his charm and the black-market gifts that he gave them. Years later, Framboise, now a widow herself, returns to the village on a quest for the truth about her family's role in a tragic event for which her mother bore the blame and was forced by the townspeople to flee. Framboise inherited her mother's journal, and soon learns that the past and the present are intertwined. Harris has woven a dark, complex story of a dysfunctional family in stressful times. As in the author's Chocolat (Viking, 2000), mother and, later, daughter are gifted cooks whose love of food and cooking shows in the wonderful descriptions of bread, cake, fruit, wine, olives, etc. A picture of life in an occupied territory emerges in which collaborators, resisters, enemies, friends, and family members live in the same area, going about their daily routines. Harris's fans will not be disappointed; her attention to detail, vivid description, and strong characterization are all in this book, too.-Carol Clark, formerly at Fairfax County Public Schools, VA (c) Copyright 2010. Library Journals LLC, a wholly owned subsidiary of Media Source, Inc. No redistribution permitted.

The past isn't gone, or even past, in this wrenching narrative, where every sensation is perfectly delineated, from the poisonous prick of childhood guilt to the swoon of surrender before a ripe berry tart--sensation as talisman. Writing from the restored Loire farmhouse where she grew up and lives under an assumed identity, 65-year-old Framboise recounts her life. Memories of the World War II Resistance remain, and her family's name is still despised. The story of why unfolds like a crab-apple blossom, and the tart, living fruit puckers the memory even while it nourishes. Framboise is too like her silent, taut mother, whose migraines are always preceded by the scent of oranges. Framboise uses that knowledge in the terrible way of children, to wrest a bit of freedom and control even though that means meeting with the German soldier who has enchanted her siblings and herself. That story weaves itself around the tale's present, where Framboise tries to divine her mother's notebook of recipes and jottings as if she were reading entrails. She tries to keep those luscious recipes and cryptic phrases from the hands of a dissembling nephew, for they protect secrets she is keeping, even from herself. There's not a moment of slackness in the perfectly wrought prose: light, heat, cold, softness, and, above all, the texture and shape and scent of bread and cake, fruit and wine, thyme and olive--all of these come off the page like the musk of desire. Darker than Chocolat (1999), Harris' first novel, and without a trace of the sentimentality that softened Blackberry Wine (2000), Harris' latest will strike the readers as a far more complex vintage. --GraceAnne A. DeCandido

An overwrought and often contrived tale with one too many characters named after food. When elderly widow Françoise Simon returns to the sleepy village on the Loire where she grew up, shes grateful that no one recognizes her after all these years as Framboise Dartigen, daughter of a woman suspected of collaboration during WWII. Framboise sets up a small crêperie and keeps her silence, whiling away the time by studying the immense scrapbook her mother, Mirabelle, left to her. This crumbling but fascinating volume is crammed with recipes, clippings, and handwritten notes in a peculiar code, which she gradually deciphers. Framboise is forced to relive her own central role in the long-ago scandal as the youngest of three children who eagerly take small luxuries like chocolate and silk stockings from the occupying German soldiers, offering in exchange information that can be used to blackmail the villagers. Framboise befriends Tomas Liebniz, youngest and best-looking of the soldiers, and confides her desire to catch Old Mother, an enormous pike lurking in the depths of the Loire. He provides fishing tackle and advice, as well as a means of getting around her disapproving mother. Mirabelle suffers from excruciatingly painful migraines, which can be triggered by the scent of oranges. Tomas gives one to the nasty little girl, who saves the peel and uses its pungent smell to repeatedly incapacitate her mother. Only morphinenow impossible to obtaineases the pain, and despite her hatred for the Germans who shot and killed her husband, Mirabelle too turns to clever Tomas, who procures it for her. After his accidental death by drowning and a bloody shooting rampage by German soldiers, the Dartigens face the wrath of the townsfolk . . . . Harris (Chocolat, 1999) is capable of elegantly sensual writing, but Five Quarters degenerates into melodrama all too soon. Author tour
More book reviews at iDreamBooks.com