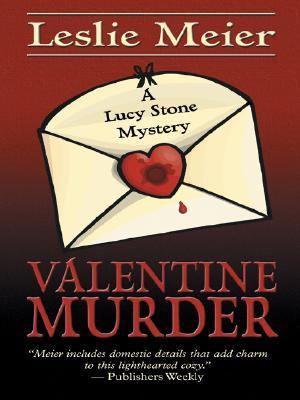 When the librarian of a newly renovated library is found dead in the basement, Lucy Stone is already aware some folks were rubbed the wrong way by the woman's uppity ways. Suspecting the motive runs deeper, Lucy starts digging into the goings-on in Tinker Cove and discovers secrets that will plunge her into a terrifying confrontation with a conniving killer.

Not-so-reluctant series sleuth Lucy Stone (Back to School Murder, Kensington, 1997) is thrust into a new murder investigation when, on her first day as a new library board member in Tinker's Cove, ME, she discovers a body. As it turns out, librarian Bitsy Howell, the victim, had no friends and more than one enemy owing to her inventive bad-mouthing of library patrons behind their backs. Despite warnings from the police and her husband, Lucy questions other board members, concluding that the library's prize pewter tankard may be the key. Nothing heavyweight or psychological here, just cozy small-town chatter, short-list suspects, and simple plot. Recommended for larger collections. (c) Copyright 2010. Library Journals LLC, a wholly owned subsidiary of Media Source, Inc. No redistribution permitted.

When plucky freelance writer Lucy Stone joins the library board in her small Maine town, she unexpectedly finds herself knee-deep in murder. Right before her first meeting, Lucy discovers librarian Bitsy Howell shot through the heart in a workroom. A state police detective tells Lucy that only board members were present at the time of the unpopular librarian's death; he also warns her to stay away from the investigation. Lucy agrees but, still curious, she decides to find out as much as she can about the other suspects, and learns that each board member was hiding a potentially lethal secret. She also discovers that the library's prized antique tankard, which was recently appraised by antique dealer Hayden Northcross, is a fake. When Hayden dies in what looks like a suicide, it's assumed by the copsbut not by Lucythat he had killed Bitsy because she'd realized he'd stolen the authentic tankard. Before Lucy can piece together all the clues to reveal the culprit, her children are nearly run over, her car is set afire and her husband is placed in mortal danger. Meier's (Back to School Murder, etc.) inclusion of the domestic details attendant to Lucy's small, close-knit community add charm to this otherwise routine, if lighthearted, cozy. (Feb.) (c) Copyright PWxyz, LLC. All rights reserved

Who had the supreme ill grace to execute disorganized librarian Bitsy Howell, in the brand-new workroom of the Broadbrooks Free Library, just in time for Lucy Stone to discover as she arrived for her first meeting as the newest member of the board of directors? Whoever it was, the locked door between Bitsy's corpse and the cozy world of Tinkers Cove, Maine, outside, points to somebody who either entered through the conference room or used a key to the outside door'in other words, one of the seven library directors. Was it board president Gerald Asquith, a closet gambler who may have financed his insatiable appetite for lottery tickets with a cunning theft? Julia Tilley, the bossy former librarian who never seemed able to give up the reins to her successor? Corney Clarke, the caterer and ``lifestyle consultant'' whose secret recipes have been filched from the backs of ingredient boxes? Hayden Northcross, the gay antiques dealer who gives Lucy some puzzling information about the library's prize antique? Or perhaps Lucy herself, who ought to be getting a free pass on the basis of her four previous cases (Back to School Murder, 1997, etc.), but who's informed by the state police that the prime suspect is the person who first reported finding the body? Everybody's hiding some secret both decorous and potentially fatal, but only readers who survive 15 rounds of innocuous conversations and domestic details will find out which secret was worth killing for. (Author tour)
More book reviews at iDreamBooks.com