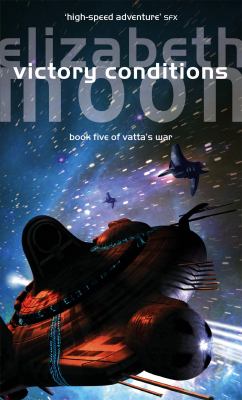 <p>A vast and hostile force is attacking prosperous trade centres, destroying their space fleets then moving on, leaving death and chaos in their wake. Admiral Ky Vatta's family was decimated by one such attack and Turek, the pirate force's leader, will not escape her vengeance.<br> <br> Ky has a loyal taskforce, but the enemy have three times the ships and the firepower to match. She must offset these advantages with her knowledge of military strategy and her ace: superior ansible technology, facilitating fast and accurate in-space intelligence.<br> <br> The alternative to victory is unthinkable - devastation of interplanetary trading networks on a galaxy-wide scale - and the end of a way of life.<br> <br> 'Rip-roaring action . . . This epic volume is a fine and fitting conclusion to Moon's grand space opera tour de force' PUBLISHERS WEEKLY</p>

<opt> <anon I1="BLANK" I2="BLANK">CHAPTER ONE Ky Vatta glanced around the table at the captains crowded into her office. It still felt a little unreal, but here they were, all waiting for her to say something: Argelos and Pettygrew, there from the beginning; Yamini, who had been Argelos' military adviser and who now captained the stealth observer they'd captured from the pirates; Ransome and Baskerville, the two surviving captains of Ransome's Rangers; Major Douglas of Mackensee Military Assistance Corporation, assigned as MMAC's liaison to her. His assistant, Master Sergeant Cally Pitt, seemed quite at ease standing in a corner. "Our main problem, as I see it, is that we're always reacting to Turek," Ky said. "We don't know much about him, what his goals are--besides killing people and getting power--and we can't understand any of the transmissions we've overheard. We've got to find a way to get better intel." "Mackensee might share data with you," Major Douglas said. "If you don't mind me butting in." He smiled at Ky. "I don't mind," Ky said. "Before we go into jump, would you like to ask them about that?" "You particularly want information about their language, any history anyone can dig up, is that right?" "Oh, I wouldn't mind knowing where they are right now, where they're going next, and in what force," Ky said, grinning. "If we knew that, we'd be hauling mass," Douglas said. "All of us. But I can ask if any of our linguists know the language. You gave them copies of the transmissions, right?" "I did, yes," Ky said. "And another thing . . . I know I need a staff structure. We talked about that before, but with over forty ships to command, I need something now, before we get to Cascadia." "Think any of those privateers will give you trouble?" Argelos asked. Ky was mildly amused to find that the former privateer no longer considered himself one of them. "I doubt it," Ky said. "Aunt Grace sent them; she'd have checked them out." "You don't just need a staff," Douglas said. "You need a combat control center. You can't command forty ships from the bridge on this one--it's too crowded, and it doesn't have the right communications setup. Your shipboard ansibles are an incredible advance, but they can't do everything and they are bulky." "My office--" "Isn't adequate," Captain Yamini said. "I agree with Major Douglas. Running the additional communications cables in here would be next to impossible, and they must be shielded cables. You're talking over forty ships now, and maybe more if the Moscoe Confederation sends ships from Cascadia. That's a lot of equipment, not just for communications but also for scan, if you're to have the data you need during a battle. I don't know how you'd get one in this ship--you'd have to practically rebuild it, I'd think--but then you've told us it needs serious work anyway." "On our ships, the CCC is built in when the hulls are laid," Douglas put in. "But I understand that some systems have modular CCCs that can be retrofitted to vessels. We don't, but maybe they can do that at Cascadia." "Before we go FTL, we should ask Stella that," Ky said, adding another line to the list in her implant. A long list, now, since she had heard about the Slotter Key privateers on their way to Cascadia, turned down Mackensee's offer of a commission, and accepted the suggestion of a liaison to travel with her. In a few short hours, her little group would l Excerpted from Victory Conditions by Elizabeth Moon All rights reserved by the original copyright owners. Excerpts are provided for display purposes only and may not be reproduced, reprinted or distributed without the written permission of the publisher.</anon> </opt>

Since the death of most of her family at the hands of political assassins, Kylara Vatta has sought vengeance against the mastermind behind the plot to destroy the Vatta family and its interstellar holdings. Now the young military-trained space merchant-turned-privateer commands her own fleet of spaceships and has identified her enemy-the notorious pirate and would-be galactic ruler Gammis Turek. Despite the threat to free worlds posed by Turek, there are powers who still mistrust the Vatta name and waiver about joining forces with Ky Vatta. The fifth and concluding volume to the author's popular "Vatta's War" series (Trading in Danger; Marque and Reprisal; Engaging the Enemy; Command Decision) takes place on many fronts-military, political, social, and personal-and Moon handles everything from full-scale space battles to intimate social and political interactions with the skill of a master storyteller. Strong characterizations, subtle humor, and a feel for military sf make this dynastic space opera a strong addition for all sf collections. (c) Copyright 2010. Library Journals LLC, a wholly owned subsidiary of Media Source, Inc. No redistribution permitted.

Rip-roaring action and intriguing science and tactics distinguish Nebula-winner Moon's fifth and final Vatta's War installment. Now combat-blooded and well on her way to the admiralty, young Kylara Vatta commands 40 far-future spacecraft against ferocious Gammis Turek, a criminal mastermind who has threatened Ky's home world of Slotter Key, her relatives and the far-flung Vatta economic empire. Ky has the rank she always hoped she'd achieve and now must accept the fearful responsibilities it entails. Weighed down by thoughts of the deaths she has caused-both friend and foe-and the need to protect the people in her command, Ky finds herself making some dangerous decisions. She's surrounded by a convincing supporting cast, from feisty fruitcake-baking Aunt Grace, who runs Slotter Key's defenses, to dashing Rafe Dunbarger, acting CEO of InterStellar Communications, who has lost his heart to Ky despite his best efforts at stoicism. This epic volume is a fine and fitting conclusion to Moon's grand space opera tour de force. (Feb.) (c) Copyright PWxyz, LLC. All rights reserved

Like its four predecessors, the bravura conclusion to the Vatta Wars is fast-paced, intelligent, and witty. Kylara Vatta has organized and disciplined a motley but powerful fleet, Rafe Dunbarger has ferreted out traitors in ISC, and they're working together against the pirate and criminal masterminds who attacked and slaughtered their families. Each has gained powerful allies. Kylara's include her cousins Toby and wheeler-dealer Stella and her aunt Grace, while Rafe finds baby sister Penny unexpectedly valuable. Action sf doesn't get much better than this, and though the series is done, let us hope to see Kylara and Rafe again.--Green, Roland Copyright 2008 Booklist
More book reviews at iDreamBooks.com