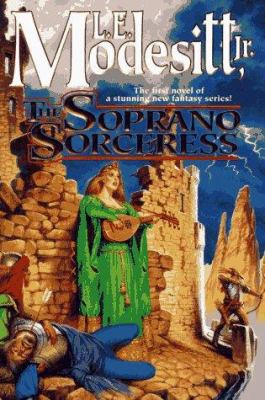 | Musical fiction.DDC classification: 813/.54 Summary: A feminist fantasy starring Anna Marshal, a bored singer in Iowa. Wishing for a more liberated life, she is whisked into a parallel universe where music is magic, and helps to defeat an invader with her music. But as she subsequently finds out, even in fantasy land there is gender politics.
Fiction notes: Click to open in new window
Total holds: 0

Anna Marshall wishes she could be anywhere but Ames, Iowa, and anything but a singer and music instructor at Iowa State University. She makes her wish at exactly the wrong time, though, because on Erde a travel sorceress has called for a powerful sorceress - and gets Anna, angry, confused, and thinking that this is not what she had in mind. On Erde, Anna is no longer just a professional singer, she is a sorceress, potentially the strongest on the whole world. On Erde, song is magic, and a wrong note can mean death to a sorcerer. Because Anna has trained a lifetime to reach the level where she won't miss a note under the worst conditions, she can sing more powerfully and precisely than anyone else on Erde. But Anna's power does not go unnoticed. The moment she arrives she becomes a target: both the political entities, who fear the unknown power she represents, and the sexist men of Erde, who fear a powerful woman, will try to kill her. Merely to survive, Anna must learn enough magic to use her musical skills and enough about Erde to protect herself and maybe, just maybe, create a new life for herself.

A feminist fantasy starring Anna Marshal, a bored singer in Iowa. Wishing for a more liberated life, she is whisked into a parallel universe where music is magic, and helps to defeat an invader with her music. But as she subsequently finds out, even in fantasy land there is gender politics.

A singer/music instructor becomes a sorceress in this first in a new series. (c) Copyright 2010. Library Journals LLC, a wholly owned subsidiary of Media Source, Inc. No redistribution permitted.

The author of the popular Recluce series (The Magic of Recluce, etc.) begins a new, enchantingly musical series. Anna Marshal, singer and teacher in Ames, Iowa, is leading a lousy life. Her eldest daughter has recently died, her ex-husband treats her like an idiot and university politics are smothering her. When she wishes to be "anywhere" else, she is magically spirited away to Erde, a medieval parallel world where sung music can produce earth-shattering results. Though Anna protests that she is a singer, not a composer, her no-nonsense approach to life and her impressive vocal talents swiftly make her one of the most powerful sorceresses in the kingdom. She must work swiftly to utilize her potential or risk seeing the people starved and fried as Darksingers invade the land. Modesitt paints a convincing portrait of a mature woman with integrity who, when given power and opportunity, rises from doormat to beneficent leader; some of Anna's best moments include teaching accounting skills to the surprised locals. While the plot holds few surprises, watching Anna disprove the old adage about absolute power and corruption makes this feminist frolic a good deal of fun. (Feb.) (c) Copyright PWxyz, LLC. All rights reserved

Modesitt takes leave from Recluce, the scene of his successful series of fantasies, in a new take on the classic situation of someone from our world being tossed into a fantasy realm. In this case, the one tossed is singer and music teacher Anna, who is recovering from the death of her eldest daughter. She finds herself in a world in which songs are spells, music is the source of power, and she herself is a potent sorceress. That status promptly makes her the target of at least three villains who, for grittily realistic and unpleasantly plausible reasons, seek to exploit or destroy her. In fact, a tone of gritty realism pervades the whole book, as Modesitt develops his variation on a venerable plot with his usual intelligence, so that more than just his staunch fans will be busily turning pages. Moreover, few will be unmoved when Anna routs a hostile army with her (literally) spellbinding rendering of "The Battle Hymn of the Republic." --Roland Green

A new fantasy from the versatile author of Adiamante (p. 1108), the Recluce series, etc. Here, blond, middle-aged soprano Anna Marshall finds herself whirled away from everyday Ames, Iowa, to another world in which the country of Defalk is threatened with invasion by evil Dark Monks from neighboring Ebra. In this world, however, music is magic, and, instructed by the sorcerer Brill and his sponsor, Lord Barjim, Anna discovers that she has enormous powers--if she can learn to harness them. Clearly, the Dark Monks, who want to enslave Defalk and have magically engineered a long, ruinous drought, are wicked and must be stopped; and Anna, adapting the songs familiar to her, joins Brill and Barjim in a tremendous battle that destroys the invaders, though both Brill and Barjim are slain. Women, however, even sorceresses, are little respected in Defalk, so Anna agrees to support Lord Behlem, the self-styled Prophet of Music, even though knowing that he will soon attempt to assassinate her. The Ebrans, meanwhile, prepare another and greater assault, and Anna, struggling with sorcery, intrigue, and gender politics, determines to do what is right no matter what the cost. Resplendent feminist fantasy with an inventive and expertly handled scenario, life-sized characters, and flawless plotting. Sequels are supererogatory; the publishers threaten them nonetheless.
More book reviews at iDreamBooks.com