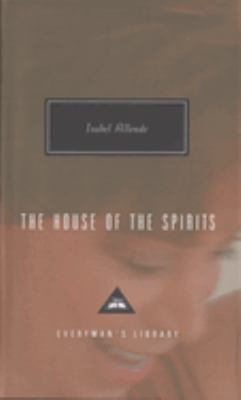 The house of the spirits / Isabel Allende ; translated from the Spanish by Magda Bogin ; with an introduction by Christopher Hitchens.

| Latin America -- FictionGenre/Form: Domestic fiction, Chilean. | General fiction.DDC classification: [Fic] Online resources: Sample text | Contributor biographical information | Publisher description Summary: A magnificent saga of proud and passionate men and women and the turbulent times through which they suffer and triumph. They are the Truebas. And theirs is a world you will not want to leave, and one you will not forget.
Tags from this library: No tags from this library for this title. Log in to add tags.
Fiction notes: Click to open in new window

In a triumph of magic realism, Allende constructs a spirit-ridden world and fills it with colorful and all-too-human inhabitants. The Trueba family's passions, struggles, and secrets span three generations and a century of violent social change, culminating in a crisis that brings the proud and tyrannical patriarch and his beloved granddaughter to opposite sides of the barricades. Against a backdrop of revolution and counterrevolution, Allende brings to life a family whose private bonds of love and hatred are more complex and enduring than the political allegiances that set them at odds. The House of the Spirits not only brings another nation's history thrillingly to life, but also makes its people's joys and anguishes wholly our own.

A magnificent saga of proud and passionate men and women and the turbulent times through which they suffer and triumph. They are the Truebas. And theirs is a world you will not want to leave, and one you will not forget.

Just as Morrison's novel uses a family's multigenerational history to evoke the inextricable melding of pain and joy that is black culture, so Allende looks at the dramatic sweep of Latin American history through the context of one vibrant but troubled family.

A strong, absorbing Chilean family chronicle, plushly upholstered--with mystical undercurrents (psychic phenomena) and a measure of leftward political commitment. (The author is a cousin of ex-Pres. Salvador Allende, an ill-fated socialist.) The Truebas are estate-owners of independent wealth, of whom only one--the eventual patriarch, Esteban--fully plays his class role. Headstrong and conservative, Esteban is a piggish youth, mistreating his peons and casually raping his girl servants . . . until he falls under the spell of young Clara DelValle: mute for nine years after witnessing the gruesome autopsy of her equally delicate sister, Clara is capable of telekinesis and soothsaying; she's a pure creature of the upper realms who has somehow dropped into crude daily life. So, with opposites attracting, the marriage of Esteban and Clara is inevitable--as is the succession of Clara-influenced children and grandchildren. Daughter Blanca ignores Class barriers to fall in love with--and bear a child by--the foreman's son, who will later become a famous leftwing troubadour (on the model of Victor Jara). Twin boys Jaime and Nicholas head off in different directions--one growing up to become a committed physician, the other a mystic/entrepreneur. And Alba, the last clairvoyant female of the lineage, will end the novel in a concentration camp of the Pinochet regime. Allende handles the theosophical elements here matter-of-factly: the paranormal powers of the Trueba women have to be taken more or less on faith. (Veteran readers of Latin American fiction have come to expect mysticism as part of the territory.) And the political sweep sometimes seems excessively insistent or obtrusive: even old Esteban recants from his reactionary ways at the end, when they seem to destroy his family. (""Thus the months went by, and it became clear to everyone, even Senator Trueba, that the military had seized power to keep it for themselves and not hand the country over to the politicians of the right who made the coup possible."") But there's a comfortable, appealing professionalism to Allende's narration, slowly turning the years through the Truebas' passions and secrets and fidelities. She doesn't rush; the characters are clear and sharp; there's style here but nothing self-conscious or pretentious. So, even if this saga isn't really much deeper than the Belva Plain variety, it's uncommonly satisfying--with sturdy, old-fashioned storytelling and a fine array of exotic, historical shadings. Copyright ©Kirkus Reviews, used with permission.
More book reviews at iDreamBooks.com