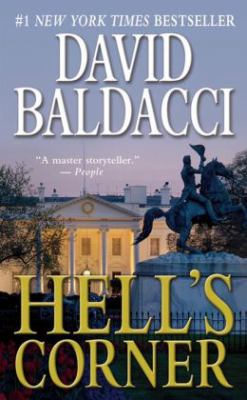 Genre/Form: Thrillers (Fiction) | Detective and mystery fiction.DDC classification: 813/.54 Summary: "The mysterious attackers in a seeming terrorist plot in Washington, D.C., might have another target in their sights, and if the Camel Club is unable to stop them, the results would be nothing less than catastrophic"--Provided by publisher.
Tags from this library: No tags from this library for this title. Log in to add tags.
Fiction notes: Click to open in new window

Before he can lead a covert mission on the orders of the President, a former CIA assassin must track down the source of a terrorist attack and navigate a shadowy world of betrayal and political secrets in this #1 New York Times bestselling thriller.

John Carr, aka Oliver Stone-once the most skilled assassin his country ever had-stands in Lafayette Park in front of the White House. Inside, the British prime minister is being honored at a state dinner. Then, just as the prime minister's motorcade leaves, a bomb explodes in the park, and in the chaotic aftermath Stone is given an urgent assignment: find those responsible.

British MI-6 agent Mary Chapman becomes his partner in the search for the unknown attackers. But their opponents are elusive, skilled, and increasingly lethal. Worst of all, the park bombing may have been only the opening salvo in their plan. With nowhere else to turn, Stone enlists the help of the only people he knows he can trust: the Camel Club.

"The mysterious attackers in a seeming terrorist plot in Washington, D.C., might have another target in their sights, and if the Camel Club is unable to stop them, the results would be nothing less than catastrophic"--Provided by publisher.

In this fifth installment-following Divine Justice (2008)-in Baldacci's (davidbaldacci.com) popular "Camel Club" series, when a bomb detonates across from the White House, the U.S. President and visiting English prime minister are the presumed targets. Following a series of surprising plot twists, former CIA assassin Oliver Stone and his Camel Club, together with British MI-5 agent Mary Chapman, thwart another assassination attempt on the two leaders and uncover the dangerous organization behind the plot. Actors Ron McLarty and Orlagh Cassidy distinctly and believably voice the motley characters, especially mastering well the U.S. regional and British accents. Sound effects such as explosions and gunshots further add to the enjoyment of this book on audio. Highly recommended for all mystery/thriller fans. [Includes a bonus interview between Ron McLarty and the author; "an action-packed, conspiracy-laden, politically intriguing mystery," read the review of the Grand Central hc, LJ 10/15/10, an LJ and New York Times best seller; the Vision mass market pb will publish in June 2011.-Ed.]-Ilka Gordon, Siegal Coll. of Judaic Studies Lib., Cleveland (c) Copyright 2011. Library Journals LLC, a wholly owned subsidiary of Media Source, Inc. No redistribution permitted.

Baldacci's implausible fifth Camel Club novel (after Divine Justice) disappoints with cartoonish plotting and characterization. The night after the U.S. president persuades former assassin Oliver Stone (aka John Carr) to re-enter government employment to tackle the growing threat of Russian drug gangs, Stone finds himself in Lafayette Park, across the street from the White House, when gunfire breaks out and a bomb explodes. Apparently, the intended target was the visiting British prime minister, who was scheduled to walk across the park before an ankle injury modified his plans. Taken off his original mission, Stone seeks to identify the forces behind the assassination attempt. Stone's old Camel Club allies involve themselves in his search, which includes the de rigueur mole hunt and the McGuffin of choice these days, a lead on Osama bin Laden's whereabouts. Those who prefer intelligence in their political thrillers will have to look elsewhere. (Nov.) (c) Copyright PWxyz, LLC. All rights reserved.

Shortly after the events related in Divine Justice (2008), Oliver Stone, former CIA assassin and now the leader of the shadowy group known as the Camel Club, is whisked away to a top-secret meeting with the president of the U.S. Russian drug cartels are operating on American soil, possibly with the approval if not the direct supervision of the Russian government. Stone's mission is to go to the drugs' point of entry, Latin America, and find a way to shut the cartels down. But before he can even begin his mission training, Stone finds himself in the middle of what appears to be a terrorist attack on the life of the British prime minister. Teaming up with a British intelligence agent, Stone attempts to determine if the attack is connected to the Russian drug-smuggling operation. The latest Camel Club novel is, as usual, skillfully constructed and very difficult to put down. Baldacci keeps peeling back layers of Stone's psyche, revealing him to be a man full of unresolved conflicts and a potentially self-destructive amount of guilt over his past actions. Another winner. HIGH-DEMAND BACKSTORY: Since Baldacci's first novel, Absolute Power, appeared in 1996, he has owned a place on most best-seller lists. His latest Camel Club novel won't break the string. Author tours and all the attendant hoopla will get the ball rolling.--Pitt, David Copyright 2010 Booklist

The Russian mafia, the Mexican drug cartel, billions of dollars and bombs targeting presidents and prime ministers combine to entrap John Carr (aka Oliver Stone) and the Camel Club into another quick-paced adventure.Stone, disgraced virtuoso of the CIA's lethal Triple Six section, is summoned by the American president, who believes the Russian mafia, conspiring with the Moscow oligarchy, has overthrown the Mexican drug cartel's leadership and intends to do with cocaine what the USSR could not do with military force: destroy the USA. Stone contemplates his covert assignment while walking through Lafayette Park near the White House. Suddenly there's machine gun fire and a bomb explodes. With the British prime minister on hand for a state dinner, authorities first think it's a botched assassination attempt. Stone's mission is changed. Find out who set the bomb. Enter an old acquaintance of Stone's, British spymaster Sir James McElroy, and a cast of characters including MI6 operative Mary Chapman and agents from FBI, ATF, Secret Service and the shadowy NIC. Stone, Chapman and the Club encounter double-agents and triple-agents, villains and victims, as evidence spins in chaotic circles. The book moves through the Washington's halls of power, to the Bronx and to the aptly named Murder Mountain. Stone copes with nanobot technology, fear of biological weapons, a Turkish professor supposedly on the trail of Osama bin Laden and a beautiful lobbyist who is interested in more that peddling influence. Character development is basic, the Washington, D.C., setting is rendered with familiarity and the writing doesn't get in the way of the fast-moving plot.Strap on your Glock. Grab an extra magazine of shells. There's danger and excitement lurking around this Corner.]] Copyright Kirkus Reviews, used with permission.
More book reviews at iDreamBooks.com