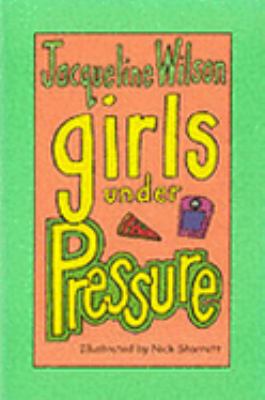 Sequel to: Girls in love.

Followed by: Girls out late.

Feeling like she doesn't measure up to her "drop-dead gorgeous" friends, Ellie tries to take control of her weight, and ends up battling bulimia, in this follow-up to Girls in Love. Ages 12-up. (Apr.) (c) Copyright PWxyz, LLC. All rights reserved

Gr 10 Up-In this sequel to Girls in Love (1997), by British novelist Jacqueline Wilson, Ellie, Magda, and Nadine are unhappy with the way they look. They set out to change their looks and, in the process, change their lives. Girls Under Pressure (1998) is read by British actress Brigit Forsyth who does a superb job of presenting this funny, moving, and disturbing story. The girls are in high school and are dealing with stress and pressure faced by teens today. The story is told from Ellie's point of view. She is concerned with her weight and battles anorexia and bulimia. Nadine wants to become a model, and must deal with her disappointment when she doesn't make the final cut at a magazine cover shoot. When she goes to another photo shoot and takes her younger sister, her sister gets the modeling contract. Magda has a confrontation with a group of boys who think she is a loose girl, and then has to defend her reputation. The way these best friends deal with these issues creates an amusing, entertaining tale with which teenagers will identify. Note that sex, beer drinking, abortion, and rape are all discussed in the story. The British idioms and language may be a bit confusing for American listeners, but they will enjoy and relate to the story.-Ginny Harrell, William McGarrah Elementary School, Morrow, GA (c) Copyright 2010. Library Journals LLC, a wholly owned subsidiary of Media Source, Inc. No redistribution permitted.

Gr. 7^-10. Starting ninth grade is more difficult than Ellie imagined. She's self-conscious about her hair and weight, and she worries about her father and stepmother. Worst of all, she's not prepared when her two best friends, Magda and Nadine, find boyfriends. Girls in Love, the first title in the British Girls trilogy, explores the three 13-year-olds' forays into romances both real and fantasized (Ellie invents her own guy). In the follow-up, Girls under Pressure, the friends face body-image challenges, sexual harassment, a lost modeling competition, and, in Ellie's case, a flirtation with anorexia. Readers, even those unfamiliar with the frequent British slang, will immediately take to Ellie's voice--all lighthearted, acerbic teenage wit and mercurial despair. They'll also appreciate the sensitivity and humor Wilson uses to show how common adolescent dilemmas become extraordinary events for each girl. Expect the girls' third adventure in the fall. --Gillian Engberg

When her thin best friend is picked for modeling tryouts, British teen Ellie goes on an extreme diet, even forcing herself to throw up. Surviving her sort-of boyfriendÆs brush-off and supporting her friends through their own troubles helps Ellie find her feet again. This sequel to [cf2]Girls in Love[cf1] is a realistic, friend-focused portrayal that avoids the obvious case-study aspects of similar books. From HORN BOOK Fall 2002, (c) Copyright 2010. The Horn Book, Inc., a wholly owned subsidiary of Media Source, Inc. No redistribution permitted.
More book reviews at iDreamBooks.com