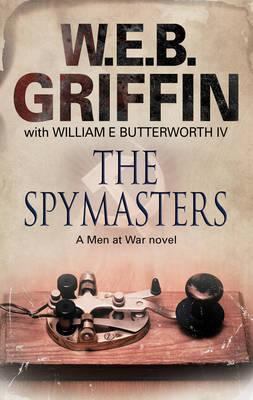 Summer, 1943. Two of the Allies' most important plans for winning World War II are at grave risk: Operation Overlord for the invasion of France, and the Manhattan Project in the race to build the atomic bomb. A furious President Roosevelt turns to OSS spy chief 'Wild Bill' Donovan - and Donovan turns to agent Dick Canidy.

Bestseller Griffin's solid seventh Men at War novel (after 2007's The Double Agents), the third in collaboration with son Butterworth, finds top OSS agent Maj. Richard Caniday involved in both a mission to keep Ike's imminent plan to invade Sicily a secret and an attempt to sabotage the Nazi V-1 and V-2 program. Goebbels has broadcast that the "aerial torpedo" attacks will first target London, starting in December 1943. To make the situation even more ominous, the Germans are planning to load nerve gas into the missiles' warheads, a move guaranteed to sow panic. Eschewing extended battle scenes and individual combat for the most part, the authors focus on spy missions behind enemy lines and recreations of meetings between historical characters. You can almost taste the gin and tonic as FDR and OSS chief William "Wild Bill" Donovan meet on the presidential yacht Sequoia to discuss plans for winning the war. Some readers might wish for more action, but series fans should be satisfied. (Aug.) (c) Copyright PWxyz, LLC. All rights reserved.

The Men at War series, chronicling the adventures of the Office of Strategic Services (OSS) during World War II, is dangerously close to running out of time. The OSS was dissolved in September 1945 to make way for the new CIA and this novel is set in the summer of '43. Operation Overlord and the Manhattan Project are in full swing, both designed to ensure a speedy end to the war. But both projects are in serious jeopardy, and only Dick Canidy, OSS chief Bill Donovan's right-hand man, can find a way to protect them. Battling moles, Soviet spies, and Nazis, the OSS agents race against time to keep the enemy from pushing ahead in the race to win the war. The book is full of action, with characters who are reasonably well drawn and believable (for a novel that is completely plot-driven). Fans of wartime adventure stories (especially, but not limited to, Griffin's legion of readers) should be very pleased.--Pitt, David Copyright 2010 Booklist

The seventh installment of Griffin's Men at War series dramatizes a pivotal moment in the campaign against Hitler, who plans on hitting London with "aerial torpedos" laced with nerve gas--this while the U.S. is still developing the atomic bomb back home. The book opens in German-occupied Poland in the summer of 1943. Polish guerillas blow up railroad tracks to stop a train carrying scores of Jews to a death camp, only to a derail a private train with one car carrying a top Nazi officer. The incident sets in motion intelligence activities in Germany, Italy and Algeria designed to infiltrate the Nazis, turn some of Hitler's generals against him, and clear the way for the American invasion of Normandy--which Churchill steadfastly opposes, preferring to attack through the Mediterranean. There's also the question of who is selling Manhattan Project secrets to the Soviets. At the heart of the narrative are "Wild Bill" Donovan, headstrong chief of the Office of Strategic Services; his top agent, strapping 26-year-old Dick Canidy; Allen Dulles, head of the OSS in Switzerland; and his sympathetic old friend, German industrialist Wolfgang Kappler, whose son Oskar is a die-hard member of the SS. Hitler's top scientist, Wernher von Braun, plays a significant role in developing the V-2 rocket, years before he was whisked to the U.S. Griffin and Butterworth, his son, are completely at ease mixing fact and fiction, skillfully piecing together pieces of their narrative puzzle. Their writing is straightforward to a fault, sometimes reminding you of a scholastic "You Are There" novel, but the book never sags, and the characters never lose our interest. A knowing thriller in which the world must be saved on several fronts from the fascist threat.]] Copyright Kirkus Reviews, used with permission.
More book reviews at iDreamBooks.com