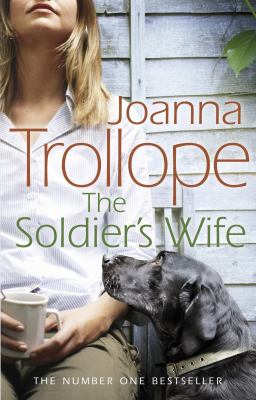 | Soldiers -- Great Britain -- Fiction | Soldiers -- Family relationships -- FictionGenre/Form: Domestic fiction.Summary: After six months away in Afghanistan, the soldiers come home - to their girlfriends, wives, parents, children. After six months of hell, being home will surely be heaven. Except that it isn't. When Dan returns home to Alexa and their children, all of whom he adores, it's still the army that comes first. Alexa wasn't prepared, when she married a soldier, that she would really be marrying the regiment.
Tags from this library: No tags from this library for this title. Log in to add tags.

The soldiers are coming home - after six months in Afghanistan. Surely being reunited with their wives and girlfriends and families will be heaven, after the hell they have been through.

When Dan Riley returns to his adored wife, Alexa, and their children, his Army life still comes first. Alexa thought she was prepared to help him, and the whole family, to make the transition to normal life again - but no-one had told her how lonely and near impossible the task would be. Does marrying a soldier always have to mean that you are not marrying a man, but a regiment?

After six months away in Afghanistan, the soldiers come home - to their girlfriends, wives, parents, children. After six months of hell, being home will surely be heaven. Except that it isn't. When Dan returns home to Alexa and their children, all of whom he adores, it's still the army that comes first. Alexa wasn't prepared, when she married a soldier, that she would really be marrying the regiment.

The best women's fiction uses domestic life to illustrate changes in the world as Trollope's best-selling novels (Daughters-in-Law; The Other Family) do, although her realistic middle- and upper-middle-class characters rarely face insurmountable difficulties. Her latest portrays family life on a British army base, highlighting the changing expectations of women in the traditional role of soldier's wife and touching only lightly on national politics, foreign affairs, and the horrors of war. Just back from an adrenaline-filled tour in Afghanistan, Dan Riley still feels more army major than family man. Trying to understand, his wife, Alexa, is tense and unhappy; daughter Isobel misbehaves at school; and the younger children act up at home. Worried friends and family, standing by, can't decide how or whether to intervene. VERDICT The noticeable absence of swearing, sex scenes, and controversial topics places this story about a rough patch in a marriage squarely in the women's fiction genre, but its nuanced writing, multigenerational points of view, and balanced presentation of changing gender roles elevate it above the pack; recommended for Trollope's many fans.-Laurie A. Cavanaugh, Wareham Free Lib., MA (c) Copyright 2012. Library Journals LLC, a wholly owned subsidiary of Media Source, Inc. No redistribution permitted.

In Trollope's dull newest (after Daughters-in-Law), British Army Major Dan Riley has just returned home from a six-month stay in Afghanistan. His wife, Alexa, has been holding down the fort, juggling young twins and an older daughter, Isabel, who is desperately unhappy in boarding school. And though Dan is glad to reunite with his family, his homecoming is marred by his inability to readjust to civilian life. Dan spends the bulk of his time at the base with his best friend, Gus, whose wife has just left him, while Alexa yearns for a life apart from the Army-one in which she can seek out her own career as a teacher. But with a potential promotion on the horizon, Dan struggles with the prospect of giving up a career that his father and grandfather before him proudly pursued, and to which he has become deeply linked. While the subject matter is timely and rife with possibilities, Trollope fails to adequately engage with the complexities of PTSD or the reentry of veterans into domestic life. Trollope's writing is consistent but consistently unexciting. (June) © Copyright PWxyz, LLC. All rights reserved.

Dan Riley has just returned from a six-month tour of duty in Afghanistan. At home are his wife, Alexa, their three-year-old twins, and stepdaughter Isabel. Alexa is familiar with the challenges of being a soldier's wife, including the unending household moves, Dan's constant exposure to injury or death, and the constraints of living a life under the army's thumb. She also knows that Dan's return will require a period of adjustment. But Major Riley is finding it difficult to return to family life. His body may be at home in Britain, but his mind is still on the battlefield. Alexa becomes increasingly desperate to make sense of her distant husband and their life in the shadow of the omniscient army. To make matters worse, the twins are a handful, and Isabel is working very hard to get kicked out of boarding school. Trollope's sixteenth novel addresses, once again, the complexities of modern family life. With her signature cache of universally appealing, well-shaped characters, The Soldier's Wife is a thought-provoking, timely look into the lives of soldiers, their families, and their homecoming from battle.--Gladstein, Carol Copyright 2010 Booklist
More book reviews at iDreamBooks.com