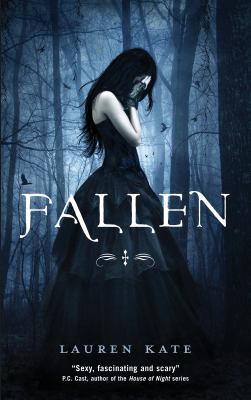 What if the person you were meant to be with could never be yours?

17-year-old Lucinda falls in love with a gorgeous, intelligent boy, Daniel, at her new school, the grim, foreboding Sword & Cross . . . only to find out that Daniel is a fallen angel, and that they have spent lifetimes finding and losing one another as good & evil forces plot to keep them apart.

Get ready to fall...

17-year-old Lucinda falls in love with a gorgeous, intelligent boy, Daniel, at her new school, the grim, foreboding Sword & Cross . . . only to find out that Daniel is a fallen angel, and that they have spent lifetimes finding and losing one another as good & evil forces plot to keep them apart.

Beautiful Lucinda (Luce) Price is banished from everything she knows after a mysterious fire leaves her friend Trevor dead and Luce shouldering the blame. She is forced to board at a decrepit reform school where students are under the constant watch of cameras and must go without cellphones or Internet access. Grief-stricken by Trevor's death and horrified by her new surroundings, Luce is also plagued by sinister, terrifying shadows that appear wherever she goes. The remote gothic setting provides the standard backdrop for the crux of the story, first in a planned series-the romantic feelings Luce develops for the elusive, unpredictable, and rather unlikable Daniel. Aside from the evil shadows, the plot can be summed up with a single word: pining. Luce longs for Daniel in various ways-dreaming of him, digging up information, trying to talk to him, experiencing rejection, then trying again. Some readers will pine right alongside Luce, but others may feel that Kate spends too much time on unrequited love and too little on forward movement in Luce's relationship with Daniel and the mystery of what, exactly, Daniel is. Ages 12-up. (Dec.) (c) Copyright PWxyz, LLC. All rights reserved

Gr 8 Up-An ominous prologue involving a man and woman in another place and time (England, 1854) begins this darkly captivating fantasy (Delacorte, 2009) by Lauren Kate. In the first chapter, set in present day Savannah, Georgia, 17-year-old Lucinda (Luce) has just arrived at the reform school to which she has been sent following the death of her friend, Trevor, in a suspicious fire. The story begins at a slow pace as the author sets the scene and mood while introducing the characters, including the mysterious and beautiful Daniel, to whom Luce is immediately attracted. She feels as though she has met him before, somewhere. Listeners also meet Cam, to whom Luce is also attracted, albeit, to a lesser degree. As the story unfolds, the pace and intensity build, keeping listeners enthralled as the true nature of several characters are revealed, as well as the significance of the menacing, shifting shadows that have haunted Luce since childhood. Justine Eyre's smooth narration is delivered in a typical teen girl's voice-sometimes understated and verging on tremulous, and dramatic at other times. Obvious similarities to Stephenie Meyer's Twilight series exist, but instead of vampires and wolves, the tale is populated with angels and demons. Many questions remain unanswered by story's end. Fans will eagerly await the sequel, Torment, which will be released in audio format in October 2010.-Mary Oluonye, Shaker Heights Public Library, OH (c) Copyright 2010. Library Journals LLC, a wholly owned subsidiary of Media Source, Inc. No redistribution permitted.

Fallen angels sure seem poised to become the new vampires, with a similarly ideal blend of brooding mystery and sexy rebellion. After a fiery accident kills a boy she is crushing on, Luce gets sent to a reform school populated, most notably, by two gorgeous fellas, Daniel and Cam. Cam is safe and charming and eager to win Luce's affections, while Daniel operates somewhere between aloof and downright hostile toward her. Readers will figure out Luce and Daniel's star-crossed-lovers angle early on, making the hints dropped throughout about past lives and dangerous fates more obvious than compelling. Although there's not enough story to justify the length of this series opener, readers who stick with it get rewarded with a climactic payoff that far exceeds the buildup. The final pages' flurry of delicious information about what's really going on with the cadre of angels and demons will likely leave readers more intrigued by what's next than invested in what just happened. Perhaps the sequel will contain an explanation of what these immortal types are doing at a reform school in the first place.--Chipman, Ian Copyright 2009 Booklist

There's no better place to encounter your centuries-old true love than reform school, right? Luce, newly enrolled at Sword Cross School after a fire kills her sort-of boyfriend, is instantly attracted to two majorly gorgeous bad boys, elusive Daniel and popular Cam. She can also see clouds of dark shadows, but she doesn't know why or where they come from. With the help of a friend, Luce discovers that Daniel has a storied supernatural history. The Southern Gothic atmosphere, the best part of the book, is so well crafted that readers can easily picture Luce walking among the marshes and crumbling buildings. Daniel's angelic identity is one that will be obvious to any reader with knowledge of the Bible. By the time Luce figures it out, however, the evil school librarian has Luce in her clutches, threatening to end Luce and Daniel's One True Love. This would be no great loss, as Luce lacks personality, and it is never clear to readers why the two hottest guys in school would compete for her attention. This angel story fails to rise above. (Supernatural. YA) Copyright Kirkus Reviews, used with permission.
More book reviews at iDreamBooks.com