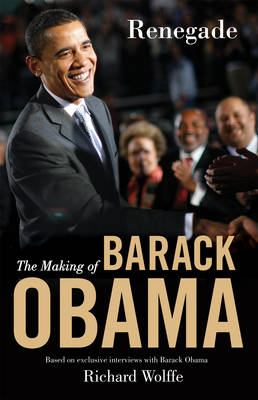 Renegade : the making of a president / Richard Wolffe.

Barack Obama himself told veteran political reporter Richard Wolffe, 'You'll get more access than anyone else', and Renegade is his unique story of how a political newcomer with no money and an outsider's name grew into the world's most powerful leader. But it is also a uniquely intimate portrait of the person behind the iconic posters, the man codenamed 'Renegade' by the Secret Service when protecting him. Wolffe portrays an historic candidate and his - until now - inscrutable character and campaign in untold, stunning detail, from his university lecturer's office in Iowa to the Oval Office in Washington. With unprecedented access, gained over a dozen exclusive interviews with Obama, Wolffe shares with us his front row seat. We fly on the candidate's plane and ride in his bus on an odyssey across a country in crisis; we stand next to him at a bar on the night he secures the nomination; and feel the tension backstage as he delivers his convention speech to a stadium crowd and a transfixed TV audienc

"Based on exclusive interviews with Barack Obama"-- Cover.