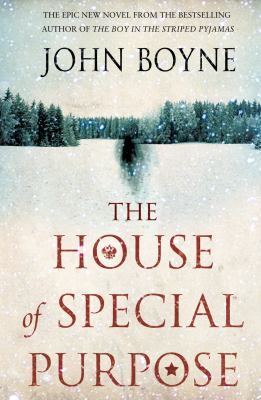 Russia 1915. Aged 16, Georgy Jachmenev steps in front of an assassin's bullet intended for a senior member of the Russian Imperial family. He is proclaimed a hero and soon becomes bodyguard to Tsar Nicholas II's son. 65 years later, visiting his dying wife in hospital, memories of the life they had together flood his mind.

Russia 1915 - Aged 16, Georgy Jachmenov steps in front of an assassin's bullet intended for a senior member of the Russian Imperial family. He is proclaimed a hero and soon becomes bodyguard to Tsar Nicholas II's son. 65 years later, visiting his dying wife in hospital, memories of the life they had together flood his mind.

Russia 1915 - Aged 16, Georgy Jachmenov steps in front of an assassin's bullet intended for a senior member of the Russian Imperial family. He is proclaimed a hero and soon becomes bodyguard to Tsar Nicholas II's son. 65 years later, visiting his dying wife in hospital, memories of the life they had together flood his mind.

Boyne's (The Boy in the Striped Pajamas) latest novel intertwines two love stories with a huge swath of history. A devoted elderly couple, Russian emigres Georgy and Zoya Jachmenev, reside in late 20th-century London. Zoya is dying of cancer, and as the narrative slips back and forth in time, Georgy, in the more poignant and realistic parts of the novel, recalls his past: the couple's travels to Paris and London, his mysterious work as a translator during the war, and the loss of their daughter. A more remarkable past is also made evident: as a young man, he saved Tsar Nicholas II's brother from an assassin, a twist of fate that catapulted Georgy from his humble village into the tsar's household in the months before the Bolshevik Revolution. While a bodyguard for the tsar's hemophiliac son, he fell in love with Grand Duchess Anastasia. As the reader is swept up in the historical narrative, then yanked back to the more sedate and tragic experiences in London, a question slowly materializes: could Zoya possibly be.? Read it to find out. VERDICT A great book for historical fiction lovers and those who love books about tsarist Russia.-Reba Leiding, James Madison Univ. Lib., Harrisonburg, VA (c) Copyright 2013. Library Journals LLC, a wholly owned subsidiary of Media Source, Inc. No redistribution permitted.

Boyne reworks perennial rumors that Anastasia, the youngest daughter of Russia's last czar, escaped the Bolshevik firing squad that killed her family, in an overstuffed romantic novel elevated by the author's prose gifts but fatally lacking in credibility. Early chapters involving narrator Georgy Daniilovich Jachmenev's boyhood in a tiny Russian village are convincing, but when he's unexpectedly chosen as a companion for the imperial heir, Alexei, the plot veers into highly improbable territory. On Georgy's first day in St. Petersburg, he locks eyes with the 15-year-old Anastasia, feeling an immediate connection to her; glimpses Alexandra, the czar's wife, privately conferring with her evil mentor, Rasputin; and enjoys an intimate chat with Nicholas II himself, who chooses to tell an uneducated 16-year-old country boy about his heavy responsibilities. These flashbacks alternate with Georgy's life in London, where he and his wife, Zoya, have lived for two decades after fleeing the Russian Revolution. Readers who know little about Russian history may find this novel suspenseful, but others will be better off with Boyne's 2012 novel, The Absolutist, which sustains a taut, unsentimental plot without the romantic excess that mars this effort. Agent: Bonnie Nadell, Frederick Hill Bonnie Nadell Agency. (Apr.) (c) Copyright PWxyz, LLC. All rights reserved.

Russophiles should immediately comprehend the title of Boyne's suspenseful and touching novel. In 1981, as his adored wife, Zoya, lies dying, Georgy Jachmenev, an elderly Londoner, reflects on their lengthy marriage and the secret tragedies they endured. A parallel plotline opens in early twentieth-century Russia as young Georgy, a muzhik (peasant) from a backwater village, saves the life of the czar's cousin and is brought to St. Petersburg, where he becomes protector to the frail czarevich and finds romance with Grand Duchess Anastasia. The two narratives dovetail, as the latter progresses forward in time and the former marches steadily backward. The book's central mystery is dated now, which may limit readers' appreciation, but it is ingeniously constructed and gripping nonetheless. While no prior historical knowledge is required, the more familiar readers are with the Romanovs, the more clues (and false leads) they will encounter as they proceed. Boyne takes some factual liberties, particularly in the earlier-set segments, but he also skillfully evokes the wrenching pain of loss and exile while presenting a tribute to enduring love. st1\:*behavior:url(#ieooui) --Johnson, Sarah Copyright 2010 Booklist

Narrator Georgy Daniilovich Jachmenev reviews his long life, from being a servant in the household of Czar Nicholas II to his post-retirement years in London. Georgy is the son of a common laborer in the small rural town of Kashin when a political accident radically changes his life. Georgy's friend Kolek Boryavich decides to act on a revolutionary impulse and tries to assassinate Grand Duke Nicholas, cousin of the czar, but in the shock of seeing his friend engage in this violent act, Georgy steps in front of the duke and takes the bullet instead. As a reward for his unintended heroism, Georgy is sent to the Winter Palace in St. Petersburg to work for Czar Nicholas. As an exuberant adolescent, Georgy becomes a caretaker to Alexei, the 11-year-old hemophiliac son of the czar and heir to the Romanov throne, but he almost loses his position when he takes his charge tree-climbing, for Alexei's health must be preserved at all costs. Georgy's stay at the Winter Palace puts him in contact with the young and winsome Anastasia, with whom he falls desperately in love, as well as with the unsavory Rasputin. Boyne moves us across decades of Georgy's life through reminiscences ranging from the Bolshevik Revolution to his emigration to England (where he gets a job at the British Museum library) to translating messages during World War II (and meeting Churchill in the process) to the loss of his beloved only daughter, Arina, to his troubled but loving marriage to Zoya. Boyne re-creates both Georgy's personal life and the life of pre-Revolutionary Russia with astonishing density and power.]] Copyright Kirkus Reviews, used with permission.
More book reviews at iDreamBooks.com