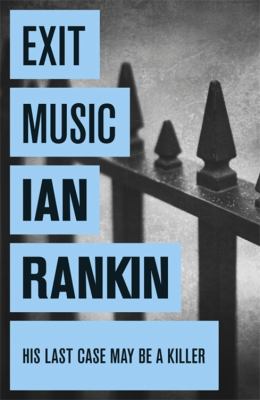 Genre/Form: Detective and mystery stories. | Detective and mystery fiction.DDC classification: 823.914 Summary: As Detective Inspector John Rebus tries to tie up some loose ends before retirement, a murder case intrudes. A dissident Russian poet has been found dead iin what looks like a mugging gone wrong. by apparent coincidence a high-level delegation of Russian bussinesmen is in town. the politicians and bankers who run Edinburgh are determined that the case should be closed quickly. But the further he digs, the more Rebus is convinced that this is more than just a random attack.
Tags from this library: No tags from this library for this title. Log in to add tags.

A brilliant Rebus novel from the master of British crime.

It's late autumn in Edinburgh and late autumn in the career of Detective Inspector Rebus. As he tries to tie up some loose ends before retirement, a murder case intrudes. A dissident Russian poet has been found dead in what looks like a mugging gone wrong. By apparent coincidence, a delegation of Russian businessmen is in town - and everyone is determined that the case should be closed quickly and clinically.

But the further they dig, the more Rebus and DS Siobhan Clarke become convinced that they are dealing with something more than a random attack - especially after a particularly nasty second killing. Meanwhile, a brutal and premeditated assault on a local gangster sees Rebus in the frame. Has the Inspector taken a step too far in tying up those loose ends? Only a few days shy of the end to his long, inglorious career, will Rebus even make it that far?

As Detective Inspector John Rebus tries to tie up some loose ends before retirement, a murder case intrudes. A dissident Russian poet has been found dead iin what looks like a mugging gone wrong. by apparent coincidence a high-level delegation of Russian bussinesmen is in town. the politicians and bankers who run Edinburgh are determined that the case should be closed quickly. But the further he digs, the more Rebus is convinced that this is more than just a random attack.

All good things must come to an end, and Rankin's Inspector Rebus series does so in the aptly titled Exit Music. Rankin began planning this swan song when one of his police consultants pointed out that in 2007 Rebus would be set to retire at the mandatory age of 60. For fans of John Rebus, it's a tough book, because every page turned means getting closer to having to say goodbye to an old friend. The story itself is a complicated yarn involving a poet, a diplomat, an audio engineer, financiers, and politicians. But the plot definitely takes a back seat to the character studies--of Rebus, Siobhan Clarke, and many other notable names from the series. The case and the book are both a fitting end to the storied career of one of Edinburgh's finest; plots and characters are tied up nicely, but not with too neat a bow. Strongly recommended for all libraries. [See Prepub Alert, LJ 6/15/08.]--Amy Watts, Univ. of Georgia Lib., Athens (c) Copyright 2010. Library Journals LLC, a wholly owned subsidiary of Media Source, Inc. No redistribution permitted.

Insp. John Rebus has just 10 days to solve the apparently motiveless murder of Alexander Todorov, an expatriate Russian poet, before he reaches 60 and mandatory retirement in Edgar-winner Rankin's rewarding 17th novel to feature the Edinburgh detective (after The Naming of the Dead). When the dogged Rebus and Det. Sgt. Siobhan Clarke look into the crime, they find an array of baffling conspiracies involving Russian businessmen, Scottish bankers and local politicians pushing for an independent Scotland. A second murder, of a man who'd taped one of Todorov's poetry readings, ensures the case gets extra resources, and Rebus's own interest is whetted by the possible involvement of Edinburgh crime boss Big Ger Cafferty. Clever, insightful prose more than compensates for the byzantine plot. There's an appropriately wistful tone to this final entry in the series. Fans will miss Rebus and wonder what on earth he'll do in retirement. (Sept.) (c) Copyright PWxyz, LLC. All rights reserved All rights reserved.

*Starred Review* Twilight is the operative word for UK crime fiction this fall. First, John Harvey brings back the great Charlie Resnick (Cold in Hand), only to leave the Nottingham inspector slouching toward retirement with a new tragedy to bear. And now Ian Rankin hands a gold watch to the ever-curmudgeonly John Rebus. With only a few days until he's officially retired, Rebus isn't going gently into any good nights, though he's not above feeling a bit maudlin: Ciggies, booze, and a little night music. What else did he have? Fortunately, he has one last meaty case the murder of a dissident Russian poet, passing through Edinburgh on a speaking tour. There's much more to it than that, of course, and soon enough Rebus smells a wholesale cover-up involving a group of Russian businessmen being courted by the city's power elite. Also in the mix is Rebus' longtime nemesis (and ironic alter ego), crime boss Big Ger Caverty, who faces his own kind of twilight. Rankin hits every note on the nose here, from the mixed emotions of Rebus' longtime partner Siobhan Clarke, eager for promotion yet reluctant to see her mentor edging toward mortality, to Rebus' bullheaded insistence on going out the way he came in, mistrusting teamwork in all its guises, or, as Siobhan describes his career, decades of bets hedged, lines crossed, and rules broken. The joy of a Rebus novel has always been reveling in those broken rules and crossed lines. What is the appeal of character-driven crime fiction, you ask? Watching Rebus do his job and stick it to every company man (or woman) who gets in his way.--Ott, Bill Copyright 2008 Booklist

Say it ain't so: Rebus retires. Having reached mandatory retirement age, Detective Inspector John Rebus has just ten days left before leaving Edinburgh's Gayfield Square police station. While he tries to interest his partner, Det. Sgt. Siobhan Clarke, in keeping his unsolved cases open, the pair is sent off to King's Stables Road, where a dissident Russian poet has come to an unsightly end. It might have been a mugging, but Rebus doubts it: There's too much fury in the killing, whose blood trail wends back to a car park. Tracing the poet's last hours turns up a curry dinner with a recording engineer, who dies when his tape archives go up in flames, and an odd group of drinking companions at the posh Caledonian Hotel, including a wealthy Russian businessman and Rebus's old nemesis Big Ger Cafferty, who controls most of Edinburgh's slums, drugs and vice. With Scottish Nationalists once more urging independence and entrepreneurial Russians angling to buy up much of the country with Cafferty as middleman, could the dead poet have upset negotiations? When the case becomes a hot potato, Rebus, overstepping bounds, is suspended three days before his retirement. The case ends with a triple-twist conclusion. One can only hope that as Conan Doyle revived Holmes and John Harvey brought back Charlie Resnick, Rankin will allow Rebus (The Naming of the Dead, 2007, etc.) several encores. Meanwhile, he goes out with panache and his usual ability to see through flummery. Copyright ©Kirkus Reviews, used with permission.
More book reviews at iDreamBooks.com