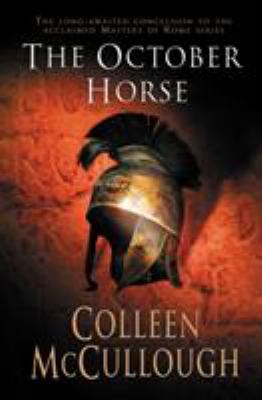 The sixth book in the epic Masters of Rome series

Julius Caesar is in the prime of his life and at the height of his powers. But behind the myth lies a man beset with contradictions. Happily married, he is also the lover of the enigmatic Egyptian queen, Cleopatra. A great general, he wishes to bring to an end Rome's endless wars. Conscious of his own power, and contemptuous of lesser men, he is determined not to be worshipped as a living god or crowned emperor. But Caesar is a man whose very greatness attracts envy and jealousy to a dangerous degree, and as the political intrigues which surround him reach their climax, his destruction becomes inevitable. As the Ides of March approach, one of the most powerful stories in history reaches its dramatic conclusion -

"Men who are doers can also be thinkers, but the thinking is done on the move, in the midst of events." This line typifies McCullough's vision of Julius Caesar as a man more charismatic, more intelligent, more visionary, and more dynamic than any other in history. Scholars have both lauded Caesar for his military genius, which has often been emulated but never duplicated, and reviled him for single-handedly destroying the Roman Republic and subjugating far-flung lands, and the author stresses that dichotomy here. In this sixth and final entry of her Roman series, McCullough boldly depicts the demise of the empire that Caesar worked so hard to create, closing with his heir, Octavius. This work probably won't be as immediately popular as The Thorn Birds, but it can definitely hold its own with the vast array of novels and nonfiction books on ancient Rome. Though some readers may find the sheer wealth of detail occasionally tedious, the book will find a niche among those who can appreciate the scholarship and research that contributed to recreating Caesar's remarkable career as dictator of Rome. Recommended for larger public libraries that own the rest of the series. [Previewed in Prepub Alert, LJ 8/02; for another portrait of Caesar, see Con Iggulden's Emperor, LJ 10/15/02.-Ed.]-Jane Baird, Anchorage Municipal Libs., AK (c) Copyright 2010. Library Journals LLC, a wholly owned subsidiary of Media Source, Inc. No redistribution permitted.

Caesar may be the nominal protagonist of this last novel in a series of six chronicling the demise of the Roman Republic, but the presiding spirit is that of Octavian (later Augustus), Caesar's successor and Rome's first emperor. McCullough's Octavian is as complex and gifted as her Caesar, but far less moral, just or merciful-a fitting ruler for a Rome grown too unwieldy for republican government. Blessed with the same immediacy and breezy style that made the tumultuous first century B.C. come alive in previous volumes (The First Man of Rome; Caesar: Let the Dice Fly; etc.), McCullough's heady novel begins with Caesar as dictator of Rome. Brilliant, ruthless, ascetic in his habits and devoted to the welfare of Rome, he enacts a series of reforms while consolidating his power and fathering a son with Cleopatra. The Egyptian, here portrayed as spoiled and shortsighted but passionately in love with Caesar, is just one in a panoply of richly imagined characters: Cato, obdurate republican and traditionalist; Mark Antony, a crass brute with a streak of animal cunning; decent Brutus, batted between his mother, the poisonous Servilia, and Porcia, his vengeful wife. Caesar is a bit too perfect in McCullough's telling, and Antony too monstrous; the novel also suffers from a sameness of voice throughout. But the skillfulness of McCullough's portrait of Octavian will make readers wish more novels were in the offing. Introduced as a guarded, talented youth, he is transformed by Caesar's assassination into a merciless, retributive man-or perhaps he simply shows his true colors. The book ends in a dark blaze of vengeance with his pursuit and destruction of Caesar's assassins. (Nov. 26) Forecast: Some 25 years after The Thorn Birds, McCullough is still going strong. Sales should be on a par with those of previous works in the series. (c) Copyright PWxyz, LLC. All rights reserved

McCullough, author of the famous and filmed novel The Thornbirds (1996), is also the author of several large and popular fictional accounts of historical events. Her latest book is the sixth and final entry in a series that traces the last days of the Roman Republic, including the events leading up to the assassination of Julius Caesar and the aftermath of that famous murder. Here, that most renowned of Romans, at the height of his power, and Cleopatra, his illustrious mistress, are at center stage. Their legendary contemporaries, including Mark Antony, Brutus, Cato, and Octavian, are also featured prominently. The swiftly moving story is packed full of political intrigue, romance, drama, and war, all pulled together by McCullough's seemingly effortless evocation of the excitement and turmoil present at the end of the republic. The prodigious author has legions of fans who like nothing so much as sinking their teeth into one of her thick tomes, and they won't be disappointed with this one. Librarians should purchase multiple copies. --Kathleen Hughes

Sixth and last in McCullough's series detailing the death throes of the Roman Republic (Caesar, 1997, etc.): an intelligent page-turning epic that seamlessly mixes love, gore, and ambition. Here, the focus is on the last years of Caesar's life as enemies plot to kill him, and the young Cleopatra bears his son. The mood now is that of a Mediterranean Gvtterddmmerung: the skies are sunny, the sea wine-dark, but an end is imminent: it won't be long before Caesar, who has worked hard to preserve and make Rome great, will be cut down by lesser mortals. McCullough, whose research is exemplary, as always, tells the story with contemporary flair and persuasive psychological insights, taking up the action in October 48 B.C. Determined to destroy Caesar and restore the old Republic, Pompey, Brutus, and Cato are mustering their armies in the eastern provinces. They don't understand, as Caesar does, that Rome must change or die: the old ways are too reactionary for a grand city with an enlightened role to play in the world. Reluctantly, Caesar heads to Alexandria to secure Cleopatra's support and acquire funds and materiel. While Cleopatra falls in love with Caesar and bears his son, Caesar plots and plans: he changes the calendar so that it follows the seasons rather than the moon, expands Roman citizenship, and enacts progressive laws. Though Pompey is killed and Cato commits suicide, Brutus, once back in Rome and egged-on by wife Portia, is soon part of the conspiracy-as is Mark Antony-to kill Caesar. The familiar events from Shakespeare are tweaked so that the death of Caesar becomes even more tragic as the conspirators begin destroying all he had accomplished. They raid the treasury for themselves and fail to take care of the legions. But they soon must contend with the opposition of Caesar's unlikely heir, 18-year-old Octavius. As ambitious as his uncle, he brilliantly outwits them all as the battles and bloodshed continue. A rousing and richly satisfying take on some of history's real beings.
More book reviews at iDreamBooks.com