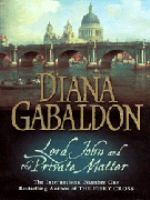 DDC classification: Free Fiction Summary: The year is 1757. On a bright June day, Lord John Grey emerges from his club, his mind in turmoil. A nobleman and high-ranking officer in His Majesty's Army, Grey has just witnessed something shocking. But his efforts to avoid a scandal that might destroy his family are interrupted by something still more urgent: the Crown appoints him to investigate the brutal murder of a comrade-in-arms, who might well have been a traitor.
Fiction notes: Click to open in new window
Total holds: 0

Sweeping historical epic set in England, Scotland and France in the mid-18th Century Lord John Grey is a man at the centre of the political upheavals that rocked Britain in the mid-18th Century. The Jacobites are still a threat, and the old enemy, France, is ready and willing to exploit the situation to its own advantage. London, Edinburgh and Paris are hotbeds of espionage, intrigue and murder. Lord John, having been removed from London for some time, appears to be above the plotting and does not appear to have any allegiance to one clique or another. So when murder happens, and seems to be the result of French espionage, he is the one who seems best placed to be able to unravel the knots... But who is John Grey, where do his allegiances lie, and who, in the long run, will he follow and serve?

Followed by: Lord John and the brotherhood of the blade.

The year is 1757. On a bright June day, Lord John Grey emerges from his club, his mind in turmoil. A nobleman and high-ranking officer in His Majesty's Army, Grey has just witnessed something shocking. But his efforts to avoid a scandal that might destroy his family are interrupted by something still more urgent: the Crown appoints him to investigate the brutal murder of a comrade-in-arms, who might well have been a traitor.

<opt> <anon I1="BLANK" I2="BLANK">Chapter One When First We Practice to Deceive London, June 1757 The Society for the Appreciation of the English Beefsteak, a Gentlemen's Club It was the sort of thing one hopes momentarily that one has not really seen--because life would be so much more convenient if one hadn't. The thing was scarcely shocking in itself; Lord John Grey had seen worse, could see worse now, merely by stepping out of the Beefsteak into the street. The flower girl who'd sold him a bunch of violets on his way into the club had had a half-healed gash on the back of her hand, crusted and oozing. The doorman, a veteran of the Americas, had a livid tomahawk scar that ran from hairline to jaw, bisecting the socket of a blinded eye. By contrast, the sore on the Honorable Joseph Trevelyan's privy member was quite small. Almost discreet. "Not so deep as a well, nor so wide as a door," Grey muttered to himself. "But it will suffice. Damn it." He emerged from behind the Chinese screen, lifting the violets to his nose. Their sweetness was no match for the pungent scent that followed him from the piss-pots. It was early June, and the Beefsteak, like every other establishment in London, reeked of beer and asparagus-pee. Trevelyan had left the privacy of the Chinese screen before Lord John, unaware of the latter's discovery. The Honorable Joseph stood across the dining room now, deep in conversation with Lord Hanley and Mr. Pitt, the very picture of taste and sober elegance. Shallow in the chest, Grey thought uncharitably--though the suit of puce superfine was beautifully tailored to flatter the man's slenderness. Spindle-shanked, too; Trevelyan shifted weight, and a shadow winked on his left leg, where the pad of the downy-calf he wore had shifted under a clocked silk stocking. Lord John turned the posy critically in his hand, as though inspecting it for wilt, watching the man from beneath lowered lashes. He knew well enough how to look without appearing to do so. He wished he were not in the habit of such surreptitious inspection--if not, he wouldn't now be facing this dilemma. The discovery that an acquaintance suffered from the French disease would normally be grounds for nothing more than distaste at worst, disinterested sympathy at best--along with a heartfelt gratitude that one was not oneself so afflicted. Unfortunately, the Honorable Joseph Trevelyan was not merely a club acquaintance; he was betrothed to Grey's cousin. The steward murmured something at his elbow; by reflex, he handed the posy to the man and flicked a hand in dismissal. "No, I shan't dine yet. Colonel Quarry will be joining me." "Very good, my lord." Trevelyan had rejoined his companions at a table across the room, his narrow face flushed with laughter at some jest by Pitt. Grey couldn't stand there glowering at the man; he hesitated, unsure whether to go across to the smoking room to wait for Quarry, or perhaps down the hall to the library. In the event, though, he was prevented by the sudden entry of Malcolm Stubbs, lieutenant of his own regiment, who hailed him with pleased surprise. "Major Grey! What brings you here, eh? Thought you was quite the fixture at White's. Got tired of the politicals, have you?" Stubbs was aptly named, no taller than Grey himself, but roughly twice as wide, with a broad cherubic face, wide blue eyes, and a breezy manner that endeared him to his troops, if not always to his senior officers. "Hallo, Stubbs." Grey smiled, despite his inner disquiet. Stubbs was a casual friend, though their paths seldom crossed outside of regimental business. "No, you confuse me with my brother Hal. I leave the whiggery-pokery up to him." Stubbs went pink in the face, and made small snorting noises. "Whiggery-pokery! Oh, that's Excerpted from Lord John and the Private Matter by Diana Gabaldon All rights reserved by the original copyright owners. Excerpts are provided for display purposes only and may not be reproduced, reprinted or distributed without the written permission of the publisher.</anon> </opt>

In a new trilogy based on a character from Gabaldon's beloved "Outlander" series, Lord John Grey pursues a traitor through the back alleys of 1750s London. (c) Copyright 2010. Library Journals LLC, a wholly owned subsidiary of Media Source, Inc. No redistribution permitted.

Trouble befalls Lord John Grey (fresh from minor roles in Gabaldon's bestselling Outlander novels) when he accidentally discovers that the Hon. Joseph Trevelyan, his cousin's betrothed, may have what those in 1757 termed "the pox" or "the French disease" syphilis. Before he can figure out an appropriate way to handle this delicate matter, he becomes involved in the investigation of the mysterious and grisly murder of a military colleague suspected of being a spy. Gabaldon (The Fiery Cross; Drums of Autumn; etc.) stitches these two plots together into a compelling narrative that also offers a wealth of juicy details about 18th-century London, especially its homosexual underbelly. Lord John, who reminisces about his dead lover, Hector, and the "lean, hard body" of an old flame, learns that Trevelyan may be traveling from one house of ill repute to another of a different sort: at the Lavender House, both buyers and sellers are men. Among his various trials and tribulations, Lord John must discern the identity of a mysterious figure in a green velvet dress spotted in both of these establishments and investigate the mysterious death of a similarly attired man, found with his face bashed in. Grey is a competent and likable sleuth, and Gabaldon's prose is crisply elegant. Her many fans will be happy to learn that this is the first in a series about the travails of Lord John Grey. (Oct.) (c) Copyright PWxyz, LLC. All rights reserved

After accidentally observing a spot on Joseph Trevelyan's privy member, Major Lord John Grey finds himself in a devilishly difficult position because Trevelyan is about to marry Grey's cousin, who has no idea her fiance is infected with the pox. As he searches for a discreet way to confirm his suspicions, Grey is dragged into a different kind of investigation. British Army requisition papers have vanished in Calais, and Grey must find out if there is some connection between their disappearance and the recent murder of a possible spy Sergeant Timothy O'Connell. Grey, who has a secret of his own to protect, begins an investigation into O'Connell's death, which, interestingly enough, leads to Trevelyan and a mysterious woman in green velvet whose identity may provide answers to all of Grey's questions. New York Times best-seller Gabaldon promotes Grey, a popular secondary character in her Outlander series, to a starring role in this thoroughly entertaining and wonderfully witty historical mystery set in the richly detailed, occasionally bawdy world of Georgian England. --John Charles Copyright 2003 Booklist

Lord John Grey, a minor character in Gabaldon's wildly popular Outlander series, investigates a murder--and is forced back into a world he'd hoped to forget. A casual glance at the Honorable Joseph Trevelyan's privy member when both men relieve themselves reveals something that Grey would rather not see: a small chancre. Given that there is no cure for syphilis in 1757, and since Trevelyan is engaged to his cousin Olivia, Grey considers himself obliged to confirm--in secret--whether her fiancÉ is poxy. Like any other valuable commodity in the mercantile city of London, information has a price, and its purveyors come from all walks of life. Grey's comrade-in-arms, Harry Quarry, a practical sort, tells him to make inquiries among the whores at Trevelyan's favorite brothel before they commence their official assignment: investigating the mysterious death of a fellow soldier, who may have been a spy. A very young prostitute, whose rough Scots accent evokes Grey's lingering (if unrequited) affection for Jamie Fraser, tells him that Trevelyan has been seen dressed as a woman, secretly entering the Lavender Club, where, after the death of his lover Hector, Grey once found some comfort in the arms of other men, though he was half-crazy with grief and drink. The plot thickens when a streetwalker is found viciously murdered, her face beaten to pulp. But she turns out to be a he--and Gabaldon takes readers for a walk on the wild side, offering an intriguing look into London's gay underworld, from dark side streets to elegant clubs--and, briefly, to tender scenes of love, emotional and physical, between men. But her chief focus is on the deepening mystery surrounding Trevelyan, his mistress, his shadowy dealings, his sexual identity, and those who serve his complex desires. A compelling and unique period mystery for the author's legion of fans. Copyright ©Kirkus Reviews, used with permission.