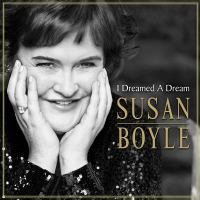 Susan Boyle’s grand unveiling on Britain’s Got Talent was with a song from Les Miserables - the very song that lends this album its title -- and if she could become an international sensation based on a show tune standard, there’s no reason for her to change her approach on her debut, since that’s the sound that made her a star. Plus, a large part of Boyle’s appeal is that she’s a middle-aged woman recalling a bygone era when there were singers that appealed to an adult audience by offering soft, stately versions of pop hits and standards. That time was the late ‘60s and early ‘70s, and apart from a rather faithful version of Madonna’s “You’ll See,” I Dreamed a Dream could very well have been released all those years ago, as it mixes up the show tunes, gospel, and Christmas carols with covers of Skeeter Davis’ “The End of the World,” the Rolling Stones’ “Wild Horses,” and a version of “Daydream Believer” that is easily the slowest on record. Boyle sings beautifully throughout, delivering more of the same of what she did in her moment in the sun on television. Those won over by Boyle, either her voice or story, will surely be satisfied. ~ Stephen Thomas Erlewine