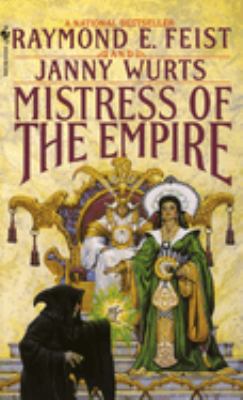 Mistress of the empire / Raymond E. Feist and Janny Wurts.

The world on the other side of the rift: Kelewan, a land seething with political intrigue and deadly conspiracies. Following the opulent panoply of Daughter Of The Empire and the dazzling pageantry of Servant Of The Empire comes the resounding conclusion to the Empire trilogy.<br> <br> <br> <br> Besieged by spies and rival houses, stalked by a secret and merciless brotherhood of assassins, the brilliant Lady Mara of the Acoma faces the most deadly challenge she has ever known. The fearsome Black Robes see Mara as the ultimate threat to their ancient power. In search of allies who will join her against them, Mara must travel beyond civilization's borders and even into the hives of the alien cho-ja. As those near and dear to her fall victim to many enemies, Mara cries out for vengeance. Drawing on all of her courage and guile she prepares to fight her greatest battle of all--for her life, her home, and the Empire itself.

Lady Mara of the Acoma, consummate player of the deadly game of intrigue that maintains the stability of the Tsurani Empire, pits her vision of a transformed society against an apparently unbeatable foe in this conclusion to a trilogy that includes Daughter of the Empire ( LJ 6/15/87) and Servant of the Empire ( LJ 10/15/90). Feist and Wurts have created an exotic fantasy world that is rich in texture and alive with political machinations. Fans of the series, as well as readers interested in Feist's ``Riftwar'' novels (set in a related universe), will enjoy this well-constructed fantasy. (c) Copyright 2010. Library Journals LLC, a wholly owned subsidiary of Media Source, Inc. No redistribution permitted.

The trilogy begun with Daughter of the Empire is here brought to a strong conclusion. Lady Mara of the Acoma clan, named Servant of the Empire by Ichindar, Emperor of the Tsuranuanni, whom she has raised from figurehead to true ruler, feels safe from her enemies for the first time in her life--until an assassination attempt aimed at her kills her young son and heir instead. Convinced her old foe, Jiro of the House Anasati, is behind the deed, she plans war. But her desires are thwarted by the reactionary Assembly of Magicians, who are, Mara begins to understand, the true power in the Empire, having kept the people docile for a millennium. In her fight to bring down her enemies and ensure peace for the Empire, Mara must employ the nonhuman cho-ja and an ancient secret. The characters' efforts to work out their destinies within the constraints of a tradition-bound culture is depicted with skill. (May) (c) Copyright PWxyz, LLC. All rights reserved

Lady Mara of Acoma, who rose to power in Daughter of the Empire [BKL Je 15 87] and survived the blood feud in Servant of the Empire [BKL O 15 90], is content with her marriage and the relative calm of the kingdom as the final book in the Mistress trilogy begins. But when an assassin's poisoned dart meant for the ruler fells her son's horse and kills the boy instead, Mara vows bloody revenge on the House of Anasati, and the peace is destroyed. As in an intricate chess game, strategists on each side move spies, plant evidence, and mask feelings, all within the strict codes of honor and revenge. Yet other games are afoot, and Mara must also guard against a powerful band of magicians and a secret community of assassins. There's room in this lengthy tale to develop both characters and subplots that Feist and Wurts manage handily. Even readers new to the trilogy will be hooked by the nonstop action and involving plot of its rousing conclusion. ~--Candace Smith

``The morning sun shone.'' So begins this concluding volume of the trilogy (Daughter of the Empire, 1987; Servant of the Empire, 1990), in a style more evocative of The Hungry Caterpillar than its obvious paradigm, Shogun. Tsuranuanni, the world on the other side of Feist's previous Riftwar saga, is a pseudo-medieval-Japanese contrivance of contending warlords and aristocratic families, with dollops of magic thrown in. Lady Mara of the Acoma clan is now the most powerful woman of the Empire, hence the target of violent dissent. Her son Ayaki is killed in an assassination attempt whose real target was Mara herself. Gradually, after many distractions, the antagonists are revealed: Mara and her insectoid-alien cho-ja allies must battle the vastly powerful Assembly of Magicians. Mara eventually wins, by a trick so flimsy that it is not worth repeating here, to preserve the leadership for her other son Justin, whose Midkemian father, Kevin, also shows up. Wearisome twaddle that just lies there, quivering feebly. Addicts only.
More book reviews at iDreamBooks.com