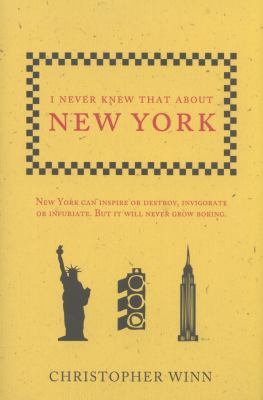 I never knew that about New York / Christopher Winn ; illustrations by Mai Osawa.

DDC classification: 974.71 Summary: Deals with New York's secrets and its hidden treasures. This title helps you learn about the people who built New York into one of the world's great cities in just 400 years.
Tags from this library: No tags from this library for this title. Log in to add tags.

In I Never Knew That About New York Christopher Winn digs beneath the gleaming towers and mean streets of New York and discovers its secrets and its hidden treasures. Learn about the extraordinary people who built New York into one of the world's great cities in just 400 years. New York is one of the most photographed and talked about cities in the world but Winn unearths much that is unexpected and unremembered in this fast moving, ever changing metropolis where history is made on a daily basis!

"New York can inspire or destroy, invigorate or infuriate. But it will never grow boring"--Cover.

Deals with New York's secrets and its hidden treasures. This title helps you learn about the people who built New York into one of the world's great cities in just 400 years.

Most people will acknowledge that New York City is kind of a big deal. Many know that it's bursting with historic national treasures. But just how many, and in what close proximity to one another, may surprise even the most seasoned New York trivia buff. This guide starts at the southern tip of Manhattan, where Giovanni de Verrazano was the first European to set eyes on the island in 1524, and works its way north, block by block, neighborhood by neighborhood. The centuries fly by, bringing with them colonial churches, 19th-century mansions, the advent of the skyscraper, and 1950s bohemian hangouts. Television and theater producer/quiz master Winn (I Never Knew That About London) does an excellent job of cataloging the sights and stories of hundreds of years with just enough detail to spark curiosity. The whole thing is a bit heavy in tone, but the delicate and detailed illustrations by his wife, Mai Osawa, lighten the mood and keep the book flowing smoothly from Battery Park to the Cloisters. VERDICT Comprehensive, fascinating, and thoughtfully laid out, this is a great read for the armchair tourist and pavement pounder alike.-Emilia Packard, Austin, TX (c) Copyright 2014. Library Journals LLC, a wholly owned subsidiary of Media Source, Inc. No redistribution permitted.
More book reviews at iDreamBooks.com