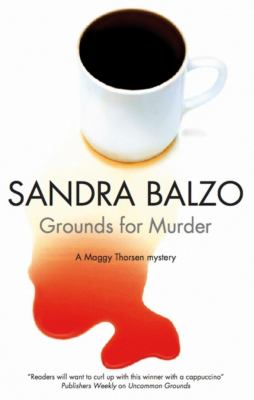 A sharp and amusing mystery from a talented writer - Set in Milwaukee at a scaldingly competitive trade show for the coffee industry, events reach a head when coffeehouse-owner Maggy Thorsen discovers a body under a table at the conference centre. As the reluctant conference coordinator and a potential suspect Maggy must track down the murderer, save her coffeehouse and hopefully put some froth into her love life . .

At the start of Balzo's lukewarm second Maggy Thorsen mystery (after 2004's Uncommon Grounds), Maggy, a 40-something divorcee who owns a coffee shop in suburban Brookhills, Wis., discovers the corpse of Marvin LaRoche, proprietor of the HotWired coffeehouse chain and Maggy's biggest competitor, under a banquet table at a coffee convention. Though Maggy was no great fan of LaRoche, she didn't kill him, and she wants to find out who did before she becomes a suspect. LaRoche's wife is a little too cheery for a new widow, and an angry activist who thought LaRoche exploited Third World coffee growers might have wanted to make a bloody statement. Some clumsy character development and awkwardly placed commentary on the art of coffeemaking will make fans of Uncommon Grounds, which was an Anthony Award finalist, hope for a return to form in Maggy's third cozy. (Dec.) (c) Copyright PWxyz, LLC. All rights reserved

*Starred Review* Feisty, sassy female lead? Check. Hunky, handsome love interest? Check. Sparkling, witty dialogue? Check. Amateur sleuth outdoes the pros? Check. Balzo's latest Maggy Thorsen mystery has all the right ingredients to fit the female-sleuth formula, as refined from Marcia Muller forward. Wisconsin PR-consultant-turned-coffeeshop-owner Maggy unwillingly agrees to organize the finals for the Barista of the Year contest at the local Java Ho coffee convention. She has arranged everything down to the milk for the lattes, prepped the judges, tested the microphones . . . what could go wrong? Everything, apparently, after Maggy discovers the bludgeoned body of Marvin LaRoche, owner of a rival chain of local coffee shops, lying underneath the trophy table. No one liked LaRoche, so there are plenty of suspects, and Maggy's love interest, Sheriff Jake Pavlik, is determined to figure out which of the coffee magnate's enemies killed him. But instead, it's Maggy who unearths the evidence, uncovers the motive, and nabs the killer. Maggy is charming and extremely funny, and Balzo's keep-'em-guessing plot and fresh, breezy prose are more than enough to ensure that this series will continue to delight. Give this to fans of female sleuths as various as Muller's Sharon McCone and Maron's Deborah Knott.--Melton, Emily Copyright 2007 Booklist

Can too much caffeine lead to murder? Though she still has bitter thoughts about her dentist husband dumping her for his 20-something hygienist, attractive divorce Maggy Thorsen has channeled her energies into making her coffeehouse a success after the untimely murder of her partner (Uncommon Grounds, 2004). Now she faces serious competition from Marvin LaRoche, owner of HotWired, a big chain of coffee shops, one of which has recently muscled into her territory. While Maggy's up to her eyeballs working on the creative contest she's running for baristas at Java Ho, Milwaukee's competitive coffee trade show, her partner Caron asks her to steal Amy, the talented barista who manages the shop run by Marvin's wife, Janalee. Despite her budding relationship with Sheriff Jake Pavlik, Maggy feels like a suspect after someone burns down Janalee's Place, and even more vulnerable when she discovers Marvin's body under a table at her mega-caffeinated contest, bashed to death with the first-prize trophy. Marvin's opening speech alienated a lot of people, and his tough business practices earned him plenty of enemies. It's up to Maggy and Jake to figure out who did the deed. Bright and breezy Maggy makes a charmingly down-to-earth sleuth. A bit of romance and coffee lore provide the froth on top. Copyright ©Kirkus Reviews, used with permission.
More book reviews at iDreamBooks.com