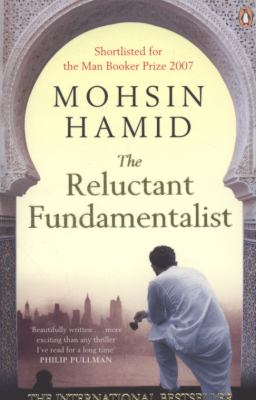 | New York (N.Y.) -- Social conditions -- FictionGenre/Form: Psychological fiction. | General fiction.DDC classification: 813.54 Summary: "At a cafe table in Lahore, a bearded Pakistani man converses with an uneasy American stranger. As dusk deepens to night, he begins the tale that has brought them to this fateful meeting." "Changez is living an immigrant's dream of America. At the top of his class at Princeton, he is snapped up by the elite "valuation" firm of Underwood Samson. He thrives on the energy of New York, and his infatuation with elegant, beautiful Erica promises entry into Manhattan society at the same exalted level once occupied by his own family back in Lahore." "But in the wake of September 11, Changez finds his position in his adopted city suddenly overturned, and his relationship with Erica eclipsed by the reawakened ghosts of her past. And Changez's own identity is in seismic shift as well, unearthing allegiances more fundamental than money, power, and maybe even love."--BOOK JACKET.
Tags from this library: No tags from this library for this title. Log in to add tags.
Fiction notes: Click to open in new window

'Excuse me, sir, but may I be of assistance? Ah, I see I have alarmed you. Do not be frightened by my beard. I am a lover of America . . . '
So speaks the mysterious stranger at a Lahore cafe as dusk settles. Invited to join him for tea, you learn his name and what led this speaker of immaculate English to seek you out. For he is more worldy than you might expect; better travelled and better educated. He knows the West better than you do. And as he tells you his story, of how he embraced the Western dream -- and a Western woman -- and how both betrayed him, so the night darkens. Then the true reason for your meeting becomes abundantly clear . . .
Challenging, mysterious and thrillingly tense, Mohsin Hamid's masterly The Reluctant Fundamentalist is a vital read teeming with questions and ideas about some of the most pressing issues of today's globalised, fractured world.

'Masterful . . . A multi-layered and thoroughly gripping book, which works as a poignant love story, a powerful dissection of how US imperialist machinations have turned so many people against the world's superpower - and as a thriller that subtly ratchets up the nerve-jangling tension towards an explosive ending' Metro
'Beautifully written . . . more exciting than any thriller I've read for a long time' Philip Pullman
'A brilliant book' Kiran Desai
'Admirably spare and amazingly exciting' Rachel Cooke, New Statesman
Mohsin Hamid is the author of The Reluctant Fundamentalist, Moth Smoke and How to Get Filthy Rich in Rising Asia. His fiction has been translated into over 30 languages, received numerous awards, and been shortlisted for the Man Booker Prize. He has contributed essays and short stories to publications such as the Guardian , The New York Times , Financial Times , Granta , and Paris Review . Born and mostly raised in Lahore, he spent part of his childhood in California, studied at Princeton University and Harvard Law School, and has since lived between Lahore, London, and New York.

"At a cafe table in Lahore, a bearded Pakistani man converses with an uneasy American stranger. As dusk deepens to night, he begins the tale that has brought them to this fateful meeting." "Changez is living an immigrant's dream of America. At the top of his class at Princeton, he is snapped up by the elite "valuation" firm of Underwood Samson. He thrives on the energy of New York, and his infatuation with elegant, beautiful Erica promises entry into Manhattan society at the same exalted level once occupied by his own family back in Lahore." "But in the wake of September 11, Changez finds his position in his adopted city suddenly overturned, and his relationship with Erica eclipsed by the reawakened ghosts of her past. And Changez's own identity is in seismic shift as well, unearthing allegiances more fundamental than money, power, and maybe even love."--BOOK JACKET.

A Princeton degree, a high-class job, a well-connected girlfriend: immigrant Changez would seem to have it all, until the tumbling of the Twin Towers realigns his thinking. From the author of Moth Smoke, a Betty Trask Award winner. (c) Copyright 2010. Library Journals LLC, a wholly owned subsidiary of Media Source, Inc. No redistribution permitted.

Hamid's second book (after Moth Smoke) is an intelligent and absorbing 9/11 novel, written from the perspective of Changez, a young Pakistani whose sympathies, despite his fervid immigrant embrace of America, lie with the attackers. The book unfolds as a monologue that Changez delivers to a mysterious American operative over dinner at a Lahore, Pakistan, cafe. Pre-9/11, Princeton graduate Changez is on top of the world: recruited by an elite New York financial company, the 22-year-old quickly earns accolades from his hard-charging supervisor, plunges into Manhattan's hip social whirl and becomes infatuated with Erica, a fellow Princeton graduate pining for her dead boyfriend. But after the towers fall, Changez is subject to intensified scrutiny and physical threats, and his co-workers become markedly less affable as his beard grows in ("a form of protest," he says). Erica is committed to a mental institution, and Changez, upset by his adopted country's "growing and self-righteous rage," slacks off at work and is fired. Despite his off-putting commentary, the damaged Changez comes off as honest and thoughtful, and his creator handles him with a sympathetic grace. (Apr.) (c) Copyright PWxyz, LLC. All rights reserved

Adult/High School-In a Lahore market, Changez, a Pakistani, is confronting an American spy bent on assassinating him. He manipulates the encounter, seizing the chance to tell his story-and to be heard. His narrative style (monologue, or perhaps an imagined dialogue) can be distracting, but clearly reveals his interior world and motivations. He tells of coming from an upper-crust but financially reduced family, attending Princeton on scholarship, having a romance with a fellow Ivy League student, and winning a job with the most elite of New York financial companies. To succeed, he must focus on the economic fundamentals of companies targeted for takeover while setting aside any concern about the human suffering his analysis will cause. He's willing to do this, and is very much at home in culturally diverse Manhattan, until 9/11, when everything changes for him. Then, Changez rebels. He grows a beard (in solidarity with his culture of origin, not as an indication of religious fundamentalism); though he appreciates the opportunities he's been given, he rejects the role America has been playing in the world; and he returns to Pakistan, where he becomes a popular professor known for activism. He is now, in America's view, an enemy. Multiple culture shocks over a short space of time have shaken this intense young man's life, and his journey is fast-moving and suspenseful. Some readers might not warm to Changez's cold brilliance, ambition, and class-consciousness, but the growth he experiences through college, disillusionment, and engagement with the larger world could capture the imaginations of thoughtful teens.-Christine C. Menefee, formerly at Fairfax County Public Library, VA (c) Copyright 2010. Library Journals LLC, a wholly owned subsidiary of Media Source, Inc. No redistribution permitted.

Presented in the form of a monologue, which is a difficult technique to manage in a novel because the author has to ensure plausibility while guarding against monotony, Hamid's second novel succeeds so well it begs the question--what other narrative format than a sustained monologue could have been as appropriate? Generally, this is a 9/11 novel or, rather, a post-9/11 one. But to see it on its own terms, which, because of its distinctive scenario, is impossible not to do, it eludes categorization. A young Pakistani man, educated at Princeton and employed in a highly prestigious financial-analysis firm in New York, was about to start a brilliant career and had fallen for a young woman whose commitment to him, it must be admitted, was partial and elusive when the terrorist attacks occurred. Answering to his own conscience, he could not remain in the U.S. By the pull of his true personal identity, he must return to Pakistan, despite his reluctance to leave the enigmatic but beguiling young woman behind. From the perspective of a few years later, the young man relates his American experiences to an American man he meets in a cafe, whose visit to Lahore may or may not have to do with the young man's recent anti-American activities. This novel's firm, steady, even beautiful voice proclaims the completeness of the soul when personal and global issues are conjoined. --Brad Hooper Copyright 2007 Booklist

A young Muslim's American experience raises his consciousness and shapes his future in this terse, disturbing successor to the London-based Pakistani author's first novel, Moth Smoke (2000). It's presented as a "conversation," of which we hear only the voice of protagonist Changez, speaking to the unnamed American stranger he encounters in a caf in the former's native city of Lahore. Changez describes in eloquent detail his arrival in America as a scholarship student at Princeton, his academic success and lucrative employment at Underwood Samson, a "valuation firm" that analyzes its clients' businesses and counsels improvement via trimming expenses and abandoning inefficient practices--i.e., going back to "fundamentals." Changez's success story is crowned by his semi-romantic friendship with beautiful, rich classmate Erica, to whom he draws close during a summer vacation in Greece shared by several fellow students. But the idyll is marred by Erica's distracted love for a former boyfriend who died young and by the events of 9/11, which simultaneously make all "foreigners" objects of suspicion. Changez reacts in a manner sure to exacerbate such suspicions ("I was caught up in the symbolism of it all, the fact that someone had so visibly brought America to her knees"). A visit home to a country virtually under siege, a breakdown that removes the fragile Erica yet further from him and the increasing enmity toward "non-whites" all take their toll: Changez withdraws from his cocoon of career and financial security (". . . my days of focusing on fundamentals were done") and exits the country that had promised so much, becoming himself the bearded, vaguely menacing "stranger" who accompanies his increasingly worried listener to the latter's hotel. The climax builds with masterfully controlled irony and suspense. A superb cautionary tale, and a grim reminder of the continuing cost of ethnic profiling, miscommunication and confrontation. Copyright ©Kirkus Reviews, used with permission.
More book reviews at iDreamBooks.com