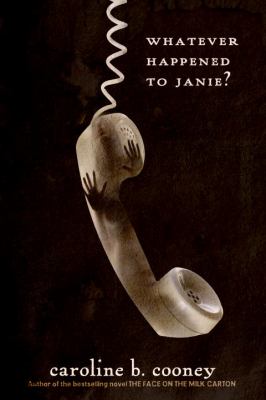 Whatever happened to Janie? / Caroline B. Cooney.

By: Cooney, Caroline B

As Janie Johnson glanced at the face of the ordinary little girl on the milk carton, she was overcome with shock. She recognized that little girl--it was she. How can it possibly be true? But it is.
With the mystery of her kidnapping now unraveled, Janie's story continues, and the nightmare is not over. No one can bring back or relive the 12 years gone by. The Spring family wants justice, but who is really to blame? The Johnsons know that they must abide by the court decisions made, but it's difficult to figure out
what's best for everyone. Janie Johnson or Jenny Spring? Who is she? Certainly there's enough love for
everyone, but how can the two separate families live happily ever after?

Sequel to: The face on the milk carton. -The members of two families have their lives disrupted when a teenage girl who had been kidnapped twelve years earlier discovers that the people who raised her are not her biological parents.

The members of two families have their lives disrupted when a teenage girl who had been kidnapped twelve years earlier discovers that the people who raised her are not her biological parents.

Sequel to: The face on the milk carton.

The sequel to The Face on the Milk Carton explores the trauma of a kidnapped adopted child returned to her birth parents. ``The power and nature of love is wrenchingly illustrated,'' wrote PW in a starred review. Ages 12-up. (Oct.)q (c) Copyright PWxyz, LLC. All rights reserved

Gr 7-12-Whatever Happened to Janie? (Delacorte, 1993) is the sequel to Caroline B. Cooney's The Face on the Milk Carton (Dell, 1991; SLJ Sept. 1998, p. 152), the fascinating story of a teenage girl who recognizes her own photo as a missing child on a school milk carton. In this continuation, the two families involved face the repercussions as Janie struggles with starting life all over again. Alyssa Bresnahan, a veteran Recorded Books narrator, speaks with a clear, even, well-paced voice that will engage the intended audience. Most public and high school libraries with books-on-tape collections will want to add this quality production.-Kathy Husband, Jefferson County Public Library, Golden, CO (c) Copyright 2010. Library Journals LLC, a wholly owned subsidiary of Media Source, Inc. No redistribution permitted.

Gr. 6-11. In a gripping sequel to The Face on the Milk Carton (1990), Janie is a typical 15-year-old, except that she has two families. After discovering that she is the missing face on a milk carton, Janie returns to her birth family, which has been searching for her since her kidnapping at age three. This unusual story presents the struggles of Janie, her siblings, and both sets of parents in an engrossing fashion. Janie promises she will have no contact with her adoptive family for three months, but everyone underestimates how difficult this will be. Which woman deserves the title and affection reserved for "Mom"? What name does she write on her papers at school--Janie Johnson or Jennie Spring? The gut-wrenching circumstances in which the characters find themselves are honestly conveyed, and while most YAs won't be able to identify with the situation, all readers will be able to recognize the powerful emotions of love, hate, and anger that Cooney sensitively portrays. ~--Susan ~DeRonne

In this sequel to 'The Face on the Milk Carton' (Delacorte), Janie Johnson has discovered that her name is really Jennie Spring -- she had been kidnapped as a small child. Janie's contented life is disrupted when she is sent to live with her biological family and must decide who she is and where she belongs. Less successful than its predecessor, the novel tries to explore the feelings and reactions not only of Janie/Jennie, but also of both families, and the result is somewhat disjointed and forced. From HORN BOOK 1993, (c) Copyright 2010. The Horn Book, Inc., a wholly owned subsidiary of Media Source, Inc. No redistribution permitted.

In The Face on the Milk Carton (1990), Janie discovered that she was kidnapped as a three-year-old and adopted by the Johnsons, who believed her to be the child of their unstable daughter Hannah. Now, at 15, she moves in with her birth parents. Janie comes to like the Springs, but misses the Johnsons with a ferocity no one has predicted. There's ambivalence among all involved; her raucous birth family wants to be ``whole'' again, but finds Janie a somewhat petulant stranger who, as the only child of well-off parents, is accustomed to privacy and privileges. No one can figure out how to redress the wrongs--the Springs' lost years, the Johnsons' separation from the child they've loved so long. Readers will like Janie, who has all the less-than-noble afflictions of a real teenager. In fact, aside from a tacked-on attempt by Janie's birth siblings to find Hannah, the book is filled with characters making poignantly realistic decisions; perhaps the hallmark here is that nobody can win. Cooney avoids feel-good answers and wrestles with the issues; readers will be fascinated by the debate and saddened by the realization that--in this case--a happy ending is all but an impossibility. (Fiction. 11+)
More book reviews at iDreamBooks.com