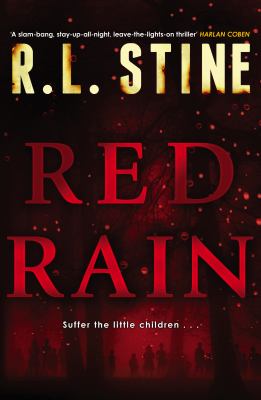 Genre/Form: Horror fiction. | Thrillers (Fiction)DDC classification: 813/.54 Summary: Travel writer Lea Sutter finds herself on a small island off the coast of South Carolina, the wrong place at the wrong time. A merciless, unanticipated hurricane cuts a path of destruction and Lea barely escapes with her life. In the storm's aftermath, she discovers orphaned twin boys and impulsively decides to adopt them. The boys, Samuel and Daniel, seem amiable and immensely grateful; Lea's family back on Long Island - husband Mark and their two children, Ira and Elena - aren't quite so pleased. But even they can't anticipate the twins' true nature - or predict that, within a few weeks' time, Mark will wind up implicated in two brutal murders, with the police narrowing in.
Tags from this library: No tags from this library for this title. Log in to add tags.
Fiction notes: Click to open in new window

First came the hurricane. The red rain began to fall. The blood of its victims. And the twin angels emerged... Lea Sutter is in the wrong place at the wrong time. Trapped on an island during a hurricane, she barely escapes alive. Out of the carnage, two boys appear - innocent, angelic and thrilled to be adopted by their new mother.

Travel writer Lea Sutter finds herself on a small island off the coast of South Carolina, the wrong place at the wrong time. A merciless, unanticipated hurricane cuts a path of destruction and Lea barely escapes with her life. In the storm's aftermath, she discovers orphaned twin boys and impulsively decides to adopt them. The boys, Samuel and Daniel, seem amiable and immensely grateful; Lea's family back on Long Island - husband Mark and their two children, Ira and Elena - aren't quite so pleased. But even they can't anticipate the twins' true nature - or predict that, within a few weeks' time, Mark will wind up implicated in two brutal murders, with the police narrowing in.

Best known for his popular novels for children and young adults ("Goosebumps" and "Fear Street" series), Stine is back with his fourth adult novel (Superstitious; The Sitter; Eye Candy). Visiting a remote island off the South Carolina coast, travel blogger Lea Sutter witnesses a mysterious ritual thought to bring back the dead. Soon after, a devastating hurricane ravages the island. Among the few survivors, Lea finds orphaned twin boys and adopts them. Back home on Long Island, Lea's husband, Mark, and their two biological children are apprehensive about the mysterious boys. Soon a murder occurs. And then another. VERDICT Brutal and gory, with graphic language and adult content, the novel features a simple and direct style that allows the reader to visualize the action. While the subject of evil children isn't new in the horror genre, Stine's story is a creepy, fun read. Recommended for original admirers of his teen and children's books as well as fans of horror fiction. [See Prepub Alert, 7/1/12.]-Carolann Curry, Mercer Univ. Medical Lib., Macon, GA (c) Copyright 2012. Library Journals LLC, a wholly owned subsidiary of Media Source, Inc. No redistribution permitted.

Goosebumps YA series creator Stine fails to compel in his first horror novel for adults. After a destructive hurricane, travel blogger Lea Sutter encounters homeless 12-year-old "twin angels" Daniel and Samuel on a South Carolina island and brings them home to Long Island. Stine quickly immerses the family in tension and horror as the boys' presence and supernatural abilities provoke conflict in Lea's family. Although Stine makes the twins' malicious intentions very clear, most of the adults seem astonishingly oblivious. Lea's husband's assurances to their children ("We're all safe here. You don't have to be scared") ring hollow as the twins pursue their dark goals. Lea, whose devotion to Daniel and Samuel is described as "love at first sight," becomes increasingly protective of them and immersed in nightmares of her island experiences. A predictable and disappointing conclusion is upended by a final tantalizing image that feels like a movie-viewer's reward for sitting through interminable credits. Agent: Andrew Gulli. (Oct.) (c) Copyright PWxyz, LLC. All rights reserved.

Stine, the wildly popular author of the Goosebumps series for children, proves he's also capable of scaring the willies out of adults. This is a dark, atmospheric, spine-chilling story of a husband and wife who adopt a pair of homeless twin brothers their family was apparently killed in a fearsome hurricane and find their lives turned upside down, as the husband is inexplicably accused of murder. And that's just the beginning of the horror. The novel owes a debt (which Stine acknowledges) to such vintage horror movies as Children of the Damned movies that feature disgustingly evil children but it's by no means a simple rehash of familiar material. Stine has a freshly terrifying story to tell, and he tells it with gusto, ratcheting up the chills until we're frozen in our chairs. Parents, be warned: this is emphatically not for younger readers.--Pitt, David Copyright 2010 Booklist

YA fearmonger Stine tries his hand at adult horror, with decidedly jejune results. When travel blogger Lea Sutter (ignoring urgent forecasts) visits a Carolina coastal island just before a hurricane, that is only the first of the foolhardy decisions that Stine's plot demands. (What if horror characters went on strike and refused to throw caution to the wind?) After the hurricane levels the island, Lea witnesses carnage, lovingly described. While walking in an ominous post-hurricane red rain, she's approached by two angelic-looking twin boys, Daniel and Samuel, who utter anachronisms in brogue. Instead of calling Child Protective Services, Lea takes the 12-year-old twins home to Sag Harbor over the objections of husband Mark, a child psychologist and the author of a controversial parenting book. The Sutter offspring, Ira, who is also 12, and teenager Elena, resent the interlopers, as does Mark's sister, Roz, particularly when Daniel, the obvious sociopath of the duo, keeps comparing her young son to a monkey. The book occasionally switches point of view to the twins, so right away readers know they are scamming the well-meaning Long Islanders, but to what end? At the same time, they seem to have a plan for world domination, starting with ruling their new middle school. In fact, the child characters take up so much space that, but for the sex and profanity in the adult sections, this could easily be another Fear Street or Goosebumps chapter book. Aside from wondering when the police (who also share narrative duties) and the Sutters are going to catch on to who is responsible for some bizarre and garishly depicted mayhem, readers will be puzzling over exactly which horror stereotype fits the twins. Are they zombies from the past, as a bit of foreshadowing hinted? Are they demons or just your garden variety bad seeds? Bottom line, they cannot wreak havoc without the witless collusion of the adult characters, who are definitely not on strike. More icky than scary.]] Copyright Kirkus Reviews, used with permission.
More book reviews at iDreamBooks.com