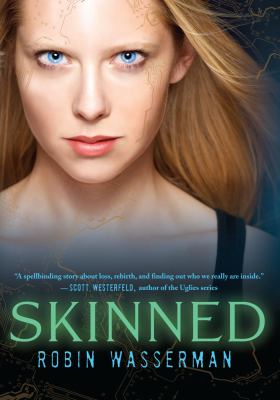 Lia Kahn was perfect: rich, beautiful, popular -- until the accident that nearly killed her. Now she has been downloaded into a new body that only looks human. Lia will never feel pain again, she will never age, and she can't ever truly die. But she is also rejected by her friends, betrayed by her boyfriend, and alienated from her old life.

Forced to the fringes of society, Lia joins others like her. But they are looked at as freaks. They are hated...and feared. They are everything but human, and according to most people, this is the ultimate crime -- for which they must pay the ultimate price.

To save her from dying in a horrible accident, Lia's wealthy parents transplant her brain into a mechanical body.

To save her from dying in a horrible accident, Lia's wealthy parents transplant her brain into a mechanical body.

Gr 9 Up-In a high-tech future, Lia Kahn is a rich, glamorous, "it" girl at a prestigious high school. Then a car accident leaves her body mangled beyond repair. Rather than let her die, her parents take advantage of a new procedure that downloads the contents of her brain into a sophisticated mechanical replica of a human body. Lia is now a "mech," known in derogatory slang as a "skinner." She still feels like Lia, but she no longer breathes, eats, sleeps, or ages. She can no longer enjoy the easy high of a b-mod, the ubiquitous mood-altering drug that gets the rest of her friends through lunch, and her boyfriend only touches her when he's drunk. She is kicked off her beloved cross-country team because the coach believes her new body gives her an unfair advantage over her competitors. Religious extremists hold a protest when she returns home from the download operation, holding up signs that say "God made man. Who made YOU?" Lia can only see her new body and new social status as a tragedy. Thoughtful readers, however, will recognize that the true tragedy is her self-imposed isolation, and that the world is much bigger and more brutal than the halls of one wealthy high school. The book is written in snappy, short paragraphs with enough sarcasm, humor, and plot momentum to engage reluctant readers.-Megan Honig, New York Public Library (c) Copyright 2010. Library Journals LLC, a wholly owned subsidiary of Media Source, Inc. No redistribution permitted.

With a premise reminiscent of Mary Pearson's Adoration of Jenna Fox (2008) and salted with a bit of the nasty competition underlying Cecily von Ziegesar's Gossip Girls formula, this tale of life after brain-download-into-a-mechanical-body explores the possibilities faced by 17-year-old Lia Kahn, neither fully dead nor currently mortal. Wasserman creates a plausible future where advanced communication and entertainment technology enhance clothing as well as teen social life. Lia was a leader among the rich, shallow girls at her school; now she is an outcast due to her status as a mech head, whose plastic body may be tough but whose emotions are those of her flesh and blood peers. A younger sister's baleful dismissal, problems with past and potential boyfriends, auxiliary issues of fundamentalists, thrill-seeking mech-head games, and an irreversible mistake form the core of the plot, which moves swiftly toward a dystopian denouement. Well composed and engaging, this is an obvious choice not only for Jenna fans but also for readers of Peter Dickinson and George Orwell.--Goldsmith, Francisca Copyright 2008 Booklist

Beautiful, talented, wealthy and above all headstrong, 17-year-old Lia Kahn knows who she is and what she wants, until she is severely injured in a car accident that destroys her body but spares her mind. Though she's a candidate for a highly controversial procedure, Lia's parents opt to preserve her mental capacity, including her memories and personality, by swapping her destroyed flesh-and-blood body for a machine model, which although it looks human does not breathe, eat or even need to sleep. Set in a well-drawn future world highly reminiscent of M.T. Anderson's Feed (2002), this novel finds Lia reentering her familiar life to learn quickly that as a "mech-head" she's subject to enormous prejudice, from the religious "faithers," her popular friends and even within her own family--which causes her to seek the answers to serious and painful question about her existence. Futuristically blurring the boundaries of life and death, this text intimately tackles tough ethical topics, including faith, identity, suicide and genetic engineering, through blunt dialogue and realistic characters. (Fiction. YA) Copyright ©Kirkus Reviews, used with permission.
More book reviews at iDreamBooks.com