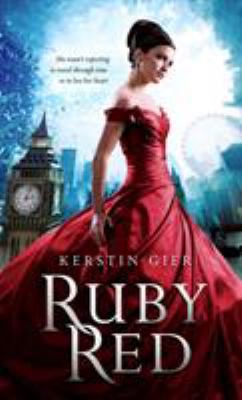 DDC classification: [Fic] Summary: Sixteen-year-old Gwyneth discovers that she, rather than her well-prepared cousin, carries a time-travel gene, and soon she is journeying with Gideon, who shares the gift, through historical London trying to discover whom they can trust.
Tags from this library: No tags from this library for this title. Log in to add tags.
Fiction notes: Click to open in new window
Total holds: 0

Sixteen-year-old Gwyneth discovers her family's time-travel gene when she mysteriously lands in the last century. This international bestseller is the first in a YA trilogy. Gwyneth Shepherd's sophisticated, beautiful cousin Charlotte has been prepared her entire life for traveling through time. But unexpectedly, it is Gwyneth who in the middle of class takes a sudden spin to a different era! Gwyneth must now unearth the mystery of why her mother would lie about her birth date to ward off suspicion about her ability, brush up on her history, and work with Gideon-the time traveler from a similarly gifted family that passes the gene through its male line, and whose presence becomes, in time, less insufferable and more essential. Together, Gwyneth and Gideon journey through time to discover who, in the 18th century and in contemporary London, they can trust. Kerstin Gier's Ruby Red is young adult novel full of fantasy and romance.

Also published with the title: Girl about time.

Includes questions for the author and excerpt from author's Sapphire blue.

Sixteen-year-old Gwyneth discovers that she, rather than her well-prepared cousin, carries a time-travel gene, and soon she is journeying with Gideon, who shares the gift, through historical London trying to discover whom they can trust.

Along with everyone else in her extended London household, 16-year-old Gwyneth believed that her cousin Charlotte was destined to be the family's next time-traveler. Unlike Charlotte, Gwyneth has no training in how to behave in other time periods, nor any background in the secret society of Guardians that protects the travelers-all vexingly inconvenient when Gwyneth starts popping back in time. What she does have is a mystery about why her mother lied about her birth date and a rocky partnership with fellow time-traveler Gideon. Gwyneth and Gideon are to fulfill the great quest of the Guardians and unlock a mysterious power, but the journeys prove perilous as they jaunt through 300 years of family secrets. First published in Germany, Gier's trilogy (Sapphire Blue and Emerald Green will follow) has met with success in Europe, though for a book set (at least partly) in the era of Google and cellphones, it has a quaint, old-fashioned feel. While some of the foreshadowing lacks subtlety, Gier's characters and plotting are first-rate, creating an adventure that should leave readers eager for the rest of the trilogy. Ages 12-up. (May) (c) Copyright PWxyz, LLC. All rights reserved.

Gr 6-9-Gwyneth Shepherd, 16, was born into an offbeat English family. Unfortunately, she has no real interest in its unique time-travel gene or the tedious fencing training and language lessons that come with being the chosen one. That's best left to her cousin, Charlotte, so when Gwyneth, rather than Charlotte, starts traveling to the past, she is entirely unprepared. She lacks adequate knowledge of history and etiquette, and her mother warns her not to trust the secret Society of the Guardians, whose job is to protect her. Gwyneth's only help comes from Gideon de Villiers, a handsome time traveler from another family. Together, they must face off against the formidable Count and uncover the mysterious disappearance of a stolen chronograph, a time machine. The teen describes her exploits with humor and naivete. Aside from her special abilities (she can also see ghosts), she is every bit the typical teenager who bickers with her family, snoops with her best friend, and crushes on the snooty Gideon. This first installment of a trilogy will soon find a new crop of fans in the United States. It's a fun, engaging read that will be an easy sell for teens wanting to time travel with a delightful narrator.-Kimberly Garnick Giarratano, Northampton Community College, Hawley, PA (c) Copyright 2011. Library Journals LLC, a wholly owned subsidiary of Media Source, Inc. No redistribution permitted.

*Starred Review* It is supposed to be Charlotte. Sixteen-year-old Gwen has always known that her cousin is the one who has the family's time-travel gene, which is about to activate at any moment. Charlotte has been trained since childhood to complete a complicated task that involves fulfilling a prophecy. Gwen tries to tell herself that the tell-tale dizzy spells she has been experiencing don't mean anything, and then she finds herself back in time. Is this time-travel fantasy easy to follow? Not especially. Throw in the secret society of the Guardians and a mysterious chronograph that synchs gems, musical notes, and the blood of the time travelers, and readers' heads may be spinning like Gwen's. What makes this such a standout is the intriguingly drawn cast, stars and supporting players both, beginning with Gwen, whose key feature is her utter normality. Despite being raised by odd characters in a strange old London house, Gwen is a girl who likes texting, watching the telly, and teasing her best friend. Suddenly, she is meeting a mysterious cabal, talking to ghosts, and, while back in the eighteenth century, running an attacker through with a sword. The fact that her assigned partner in these endeavors is swoonworthy Gideon helps only a little. Adventure, humor, and mystery all have satisfying roles here. Originally published in Germany, this is the first of a trilogy. Hint: for a clue to what it all means, reread the first chapter.--Cooper, Ilen. Copyright 2010 Booklist

A contemporary English teen discovers she possesses a gene enabling her to travel into the past in this riveting first volume of the Ruby Red trilogy. Sixteen-year-old Gwen lives in London with her mum's eccentric family. Her cousin Charlotte's the expected carrier of the family time-travel gene that has been passed along the female line since the 16th century, so Gwen's totally unprepared when sudden vertigo morphs into uncontrolled time travel working her as the gene carrier. Apparently her mum falsified Gwen's birth date to protect her from the Guardians, the old, powerful and dangerous secret society obsessively watching over the time travelers and protecting the chronograph, a device for negotiating time travel. To the Guardians, Gwen is the Ruby, the crucial last link in their Circle of Twelve, while 19-year-old Gideon, her handsome fellow time traveler in the male line, is the Diamond. Together Gwen and Gideon are expected to complete the Circle and solve an undefined mystery involving Count Saint-Germain, a malevolent time traveler from the 18th century. As she narrates this fast-paced puzzler, Gwen convincingly conveys the bewilderment, fear and excitement of a teen rooted in the present but catapulted from her school-girl routine into the past. Bell's deft translation captures an engaging heroine with a cell phone and a sense of humor, an emerging romance and a complex, unresolved time-travel mystery spanning four centuries. (Fantasy. 12 up)]] Copyright Kirkus Reviews, used with permission.
More book reviews at iDreamBooks.com